Diets, non-colas have been areas of growth for refreshment category

As streaming platforms proliferate, the way consumers digest TV has evolved. According to the Streaming Wars edition of the “Nielsen Total Audience Report,” consumers in over the top (OTT)-capable homes spend nearly 19 percent of their TV time streaming content. The market research firm points to what a large amount this is considering the youth of this digital medium. Much like consumers’ TV viewing habits, the beverage market is seeing the impact that emerging categories are having on legacy products.

Aga Jarzabek, research analyst for Chicago-based Euromonitor International, notes, “Volume sales are expected to continue declining,” she says. “Value sales will continue to grow, but will slow slightly each year over the next five years. The unhealthy perception of carbonates will only accelerate among consumers, leading to falling consumption rates.

“In turn, manufacturers will increase unit prices consistently to at least preserve value sales growth,” Jarzabek continues. “Higher unit pricing will come from smaller pack sizes and focus on single-serve through convenience and at register displays.” 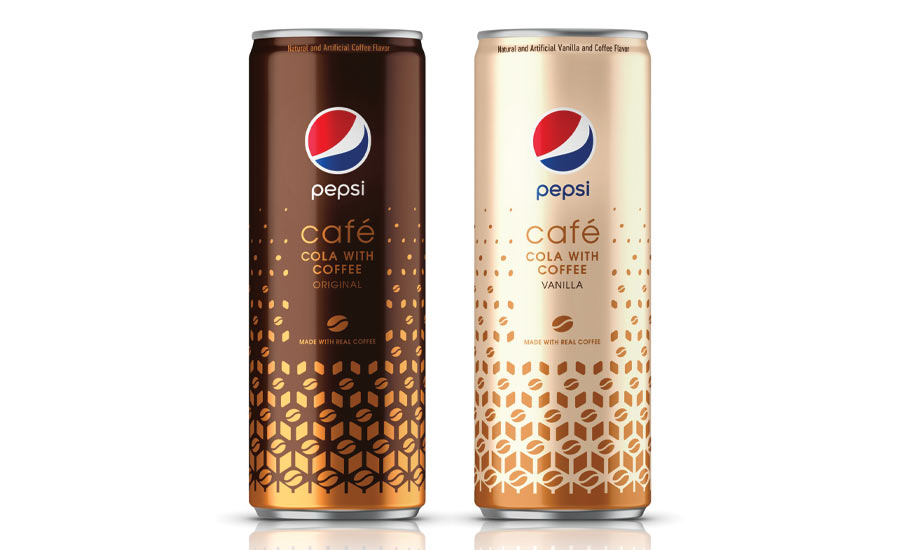 The Pepsi brand is furthering its hybrid portfolio with the launch of Pepsi Café, a new beverage that blends the taste of coffee with Pepsi. (Image courtesy of PepsiCo)

Jacqueline Hiner, industry analyst for Los Angeles-based IBISWorld, also recognizes the impact that health and wellness has had on the refreshment category. “The most prominent driver of this trend is the higher number of health-conscious individuals in conjunction with rising per capita disposable income,” she says. “Rising disposable income levels enable consumers who enjoy the taste of carbonated beverages to splurge on craft beverages that are made with natural ingredients. However, growth in this market is expected to be tempered by the continued increase in health consciousness driving consumers to drink water.”

Although sugar content has been a developing concern for the category, Hiner points to various examples of brands addressing this concern with natural solutions.

“Overall, the declining sugar consumption has resulted in lower soda sales as consumers have opted for water,” she says. “Some larger companies, however, have launched craft soda brands to appeal to more health-conscious consumers. PepsiCo Inc. has responded to the trend by launching three craft soda brands over the past five years in addition to Pepsi True, which has less sugar but is made with real sugar instead of artificial sweeteners. Keurig Dr Pepper Inc. has benefited from its Canada Dry brand due to its variety of non-sugary drinks, such as carbonated water.”

As the saying goes, “When life gives you lemons, make lemonade.” With CSDs challenged by the more health-focused consumer trends, some analysts point to the potential that expands beyond indulgent refreshment.

“One big trend that has been negatively impacting big CSD brands is functionality,” Euromonitor’s Jarzabek says. “Carbonates simply do not offer enough in this regard and even run counter to this trend. Carbonates’ consumers are switching to water to avoid sugar or to energy drinks and RTD coffee for functional benefits.

“Though small, the only category within carbonates that has experienced significant and sustained growth is fortified functional non-cola carbonates,” she continues. “Many products within the category have found success by blurring the line between carbonates and sparkling waters, offering a flavorful beverage that preserves the sweetness of a soda without the sugar.”

Noting that classic soft drinks do not have much room for innovation, Jarzabek notes that brands are exploring hybrids with growing regularity.

With 114 grams of caffeine, about as much caffeine as a cup of coffee, guarana extracts and B vitamins, Coca-Cola Energy combines energy ingredients with the taste of Coca-Cola. (Image courtesy of The Coca-Cola Co.)

“The Coca-Cola Co. just released Coca-Cola Energy, as energy drinks are experiencing high growth,” she says. “PepsiCo, too, has been developing the Mountain Dew brand toward energy offerings with Kickstart and Game Fuel. All the big manufacturers also have RTD tea and RTD coffee lines they’re putting a lot of focus on.”

To provide consumers with an approachable option to the energy drink category, Atlanta-based The Coca-Cola Co. launched Coca-Cola Energy.

Purchase, N.Y.-based PepsiCo’s Pepsi brand also is furthering its hybrid portfolio with the launch of Pepsi Café, a new beverage that blends the taste of coffee with Pepsi.

Debuting this month in the United States, Pepsi Café will be available in Original and Vanilla varieties. With nearly double the amount of caffeine than a regular Pepsi, Pepsi Café Original is designed for those who enjoy their regular cup of Joe, but also love the sweeter caramel undertones of a Pepsi, the company says. Pepsi developed its Pepsi Café Vanilla to be a sweeter and creamier beverage, providing consumers with a new twist on the indulgent vanilla flavor, it adds.

IBISWorld’s Hiner also details the potential for functional CSDs, but cautions that the product attributes likely will be minimal compared with other beverage categories.

“There is some opportunity for industry operators to grow market share by producing beverages with added functionality,” she says. “The most likely would be energy drinks as many operators already produce caffeinated beverages. … Another possibility is beverages with antioxidants. This is exemplified by Keurig Dr Pepper’s acquisition of Bai Brands in 2016. However, it is unlikely that operators would introduce beverages with fiber, protein or cognitive health benefits.”

Soft drinks also have growth potential through the beverage alcohol market. A January Insights from New York-based Nielsen titled “Soft Drinks and Health and Wellness can Coexist in the U.S. Alcohol Space” details how “sober-curious” movements have benefited the CSD market.

“Soft drinks and health and wellness are an unorthodox couple,” Nielsen states. “Many people abstain from alcohol because of health concerns, culminating in the rise of Dry January — in which one-in-five (21 percent) U.S. consumers participated in 2019. Among last year’s participants in the alcohol-free challenge, soda drinks were the most popular option, as nearly half (46 percent) consumed them, followed by water (43 percent).”

Although functional, hybrids serve as an opportunity to draw consumers in, research also shows the importance of engaging the occasional/infrequent consumer.

In Chicago-based Mintel’s April 2019 report titled “Carbonated Soft Drinks – US,” the market research firm details the need to retain CSD consumers who consume the product only a few times a month.

“Mini cans cater to the small treat occasion,” it continues. “Occasional/infrequent users enjoy mini cans because it allows them to indulge without the guilt of having a full CSD and companies benefit because mini cans help retain customers and offer companies higher margins than full-sized cans.”

Euromonitor’s Jarzabek also denotes how indulgence and small pack sizes can be the positive approach that brand managers communicate. “Manufacturers are repositioning their marketing of CSDs as an indulgence beverage, especially for legacy brands,” she says. “Pack sizes will start trending toward smaller cans to encourage portion control and make the drinks a bit more approachable for the sugar wary.”

Despite the overall contraction seen throughout the CSD market, not all segments have remained challenged. Among those has been the non-cola varietals, yet expectations for these should remain limited, experts note.

“In previous years, the category’s performance was bolstered by flavor innovation and new product launches,” she continues. “However, these aspects ceased to inspire consumer interest as other categories, such as bottled water, RTD tea and energy drinks, have emerged as innovation leaders.”

The diet soft drink market also has seen a short-term turnaround. “Diet carbonated soft drink performance has been better than that of full-calorie products in the last couple years,” BMC’s Hemphill says.

Although diet performance has improved, its contribution is limited, experts note.

“Diet beverages are still a very small product segment, accounting for only an estimated 14.9 percent of industry revenue, which is far lower than regular beverages,” IBISWorld’s Hiner says. “This product segment has been on the rise as consumers have been more health conscious, opting for low- and zero-calorie beverages.”

Even with these pockets of growth, analysts expect that CSDs will remain challenged on volume sales, but will post gains in value sales. “We expect CSD demand to remain soft in the years ahead,” BMC’s Hemphill says. “That said, a combination of pricing, packaging mix, and increased immediate consumption have helped to improve category revenues in recent years. While volume is likely to continue to be soft, we believe category revenues will continue to see modest increases.”