In the song “Meet Me Inside” from the Broadway hit musical “Hamilton,” George Washington says to Alexander Hamilton, “This war is hard enough, without infighting.” Although the lyrics are in reference to the Revolutionary War, the same can be said about the dairy and dairy alternatives markets.

Traditionally viewed as rivals in the overall milk space, research suggests that the one-or-the-other approach is a hindrance to both markets.

“Regardless of the growth or decline seen in dollar sales, both dairy and non-dairy milks are being confronted by stagnant purchasing patterns,” states Mintel in its October report titled “Milk And Non-Dairy Milk – US.” “Indeed, 63 percent of dairy milk consumers and 52 percent of non-dairy milk consumers are purchasing the same amount of milk now as they were one year ago. These habitual buying patterns could prove challenging for sales in the future, as consumers are not motivated to change their shopping behavior, be it positive or negative.”

Chicago-based Mintel notes that whether it is dairy or non-dairy milk, adults use the markets as an additive for products like baking, cereal, coffee or tea, versus as a beverage choice.

“Only 14 percent of people who buy dairy milk use it on-the-go (15 percent, non-dairy) and 12 percent use it as a post-workout drink (19 percent, non-dairy),” the report states. “Similarly, a correspondence analysis on usage occasions shows that there is no clear choice for dairy or non-dairy milks when it comes to drinking a glass of milk with a meal, or as a drink for children.”

The report adds that dairy and non-dairy milks contain high protein amounts and healthy fats, which aligns with numerous drinking occasions such as breakfast drinks, workout recovery or as a meal replacement beverage.

“Repositioning the beverages to shed light on these alternative usages may benefit overall sales by encouraging consumers to consider new ways to incorporate milk into their day,” the report states. “This may also limit some of the cannibalization within the market by reducing the internal competition, eliminating the one-milk-fits-all purchasing mentality.”

One beverage brand looking to expand drinking occasions for milk is Chicago-based fairlife LLC. Operating in partnership with The Coca-Cola Co., fairlife released in 2018 smart snacks, a collection of snack-sized beverages designed to curb hunger in between meals, the company says. Available in Rich Chocolate, French Vanilla and Creamy Strawberry, each flavored variety offers 15 grams of protein and 5 grams of dietary fiber in each 8-ounce bottle, it adds.

Although research suggests the benefits of addressing the broader milk category, one of the biggest markets needing attention are dairy milks.

Dairy milk has been the most challenged as sales have fallen 22 percent since 2014, the report states. Among the segments that have the biggest impact for this decline has been skim/low-fat milks, it notes.

Despite the challenges for dairy milk, not all brands have failed to deepen sales. John Crawford, vice president of client insights for dairy for IRI, highlights that fairlife has been a brand that continues to post growth. Even after losing some distribution earlier this year following negative reaction after a video related to the treatment of its cows went viral, the ultra-filtered milk brand still saw sales up 30 percent in the 52 weeks ending Sept. 8.

The ultra-filtered processing of fairlife’s milk is obliging other brands to follow suit.

“fairlife, I think, is a really compelling story,” Crawford says. “You have a couple of brands that are following fairlife into that ultra-filtered milk. You’ve got Organic Valley that has their Organic Valley Ultra that they’re coming out with now, and then you’ve got Dairy Gold, which launched a product called Dairy Gold Fit; that is another ultra-filtered product. I would expect more folks to follow suit in this space. Think about it [with] more protein, lower sugar and extended shelf life and lactose free — that’s a pretty good mix of attributes there for a dairy milk.”

Focusing on innovative product attributes might be the best course of action for dairy milk brands to fuel growth as analysts remain cautious about the propositions for traditional milk segments.

“While there is potential in flavored and whole milks, which have seen flat or slightly increased sales in recent years, the segments lack the universal appeal to earn sales sizable enough to balance out the market’s losses,” the Mintel report states. “Still, the weight consumers give to taste when selecting milks indicates that whole and flavored milks could become more significant to the market as a whole.”

Yet, traditional dairy milk is not the only segment facing challenges as of late. Refrigerated kefir is down 5.5 percent, totaling $91.7 million for the 52 weeks ending Sept. 8, according to IRI data.

“Kefir did see some growth back in 2015, 2016 and … [has] been down more recently,” Crawford says. “Overall in the four years, kefir’s actually down 2.1 percent. In the latest 52 weeks, it’s actually down 5.5 percent, so kefir’s not contributing to growth, believe it or not.”

Crawford notes that some of kefir's previous growth could have stemmed from it being new and support from retailers, but now that seems to have dissipated. Despite this performance from kefir, the segment remains flush with brands that tout digestive health attributes on its packaging.

“For kefir, 86 percent of them have a prebiotic or a probiotic claim to it, and that’s some of the big claims that are on there. There’s a little bit of less fat claims on there, some low lactose claims, there’s some organic claims but the big claim is around pre- and probiotics,” Crawford says.

Another small segment within the liquid dairy market is yogurt drinks, which has been a positive contributor in recent years. “Growth has slowed, but the overall four-year CAGR for yogurt drinks is up 9 percent,” Crawford says. He adds that for the 52 weeks ending Sept. 8, it is up 2.1 percent.

Although yogurt drinks are products in which pre- and probiotics would function properly, Crawford says the frequency of these benefits being promoted is much lower when compared with kefir.

As consumers look to take more control over their health and wellness, one trend that has proliferated is the use of plant-based ingredients. This has contributed to the growth of the non-dairy milk market. 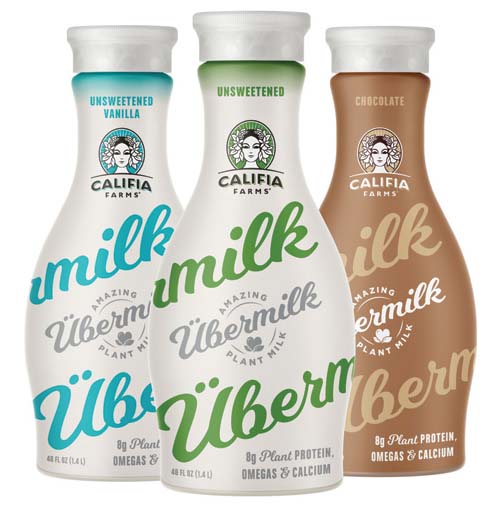 One of the emerging non-dairy milk segments is oat milk. Califia Farms launched Übermilk, a line of oat milk beverages that have 8 grams of plant-based protein in each serving, it says. (Image courtesy of Califia Farms LLC)

“Currently, 38 percent of adults try to eat some plant-based foods,” Mintel’s report states. “In fact, more than a quarter of adults report following a specialized plant-based diet. As a result, plant-based options are now widely available across nearly all food and drink categories and performing well. Non-dairy milks are no exception. Brands can benefit from these diet trends to further encourage growth, particularly from new consumers, as only 59 percent of adults purchased non-dairy milk in the past three months, compared to the 90 percent who purchased dairy milk.”

“There’s certainly some diets that are key in avoiding dairy,” he says. “There’s an increase of folks that are lactose intolerant or believe they’re lactose intolerant and certainly that’s a key factor. Certainly, some of the sustainability, the carbon footprint and some of the animal welfare is another component of it. As vegetarian and vegan diets continue to grow a little bit and you get some other diets that are in there as well, I think those are all contributing to it.

“I also think … there’s some of it being that milk has seen declines and there’s a lot of reasons for milk decline,” Crawford continues. “I do think that the younger consumer is a little bit more adding plants to their diets. You’re seeing plant-based growth across the board throughout the store.”

Among these dairy alternatives, almond milk makes up the lion’s share as refrigerated almond milk registered $1.2 billion in sales, an 8.3 percent increase, and ready-to-drink (RTD) almond milk accounted for $88 million in sales, which was a 3.6 percent decline, for the 52-week period ending Sept. 8, IRI data shows.

As the leading alternative milk and still growing, almond milk likely will continue to benefit from plant-based diet trends; however, new entrants have emerged on the scene to provide consumers with more choices.

“Almond, coconut and soy milks remain staples for the non-dairy market, though new entrants are innovating with alternative nut and plant bases,” Mintel’s report states. “These ‘other’ non-dairy milks are the fastest growing segment in the market. Their unique flavors, uses and nutritional benefits help prompt purchase. While this may pose a threat to the fundamental non-dairy segments, it bodes well for the market as a whole, as these non-traditional non-dairies may encourage new consumers to enter the space.”

One market gaining steam lately has been the oat milk market. Earlier this year, Los Angeles-based Califia Farms launched Übermilk, a line of oat milk beverages. Übermilks have 8 grams of plant-based protein in each serving, including all eight essential amino acids and fatty acids from plant oils for omega-3, -6 and -9, as well as calcium, iron, vitamin D, potassium and vitamin E, the company says. BI