It seems like each week new, eye-opening facts surface about the environment and pollution. Plastic pollution has become such a pressing environmental issue that it has even prompted the United Nations to negotiate a global treaty. Although the treaty still is in the works, there is hope for the environment as beverage manufacturers and consumers increasingly are implementing sustainable packaging options.

According to the Annapolis, Md.-based Flexible Packaging Association, the packaging industry as a whole has been diligently working to reduce its environmental impact through such initiatives as lightweighting, using life cycle assessment tools to quantify impacts, exploring novel materials and extending the shelf life of products to reduce overall product and food waste, it says in its 2018 report titled “A Holistic View of the Role of Flexible Packaging in a Sustainable World.”

And through these efforts, beverage manufacturers are capturing consumers’ attention. “In [Nielsen’s] April 2019 Omnibus study of more than 21,000 U.S. households, we found that products that are environmentally friendly and use recycled packaging resonate most strongly with consumers overall,” says Julia Wilson, vice president of global responsibility and sustainability at New York-based Nielsen, in a July web article.

“Consumers find both of these qualities to be the most important to their decision making, as well as top attributes they would pay more for across all categories,” she says.

According to Chicago-based Mintel’s Global Packaging Trends 2019 report, it is becoming increasingly common for consumers to request the ability to recycle, and they are interested in understanding how the recycling process really works.

“Greater clarity on which parts of packaging can be recycled is the top factor that would encourage consumers to recycle more frequently,” the report states.

One company that is aiming for greater clarity on the recyclability of its products is The Coca-Cola Co., Atlanta. It recently introduced the addition of its“How2Recycle” labels across all DASANI packages to help educate and encourage consumers to recycle after use, the company says.

How2Recycle is a standardized labeling system that clearly communicates recycling instructions to the public, according to the company’s website. Other consumer packaged goods (CPG) brands have implemented this label including Walmart, Target, Nestlé, General Mills and more.

The Environmental Protection Agency, Washington, D.C., notes that in 2015, the recycling rate for recycled plastics was 9.1 percent. Although relatively small, the recycling of some specific types of plastic containers were higher with PET bottles and jars at 29.9 percent and high-density polyethylene natural bottles at 30.3 percent, according to the association.

Because plastic resins are such a common material for CPG packaging, the industry is implementing different solutions to help raise recycling rates and lessen pollution. “Plastics remain a highly effective packaging material,” says Simon Lowden, president of global foods at Purchase, N.Y.-based PepsiCo. “They are lightweight, flexible and incredibly good at keeping a variety of foods and beverages safe and delicious, even after long journeys and storage.

“[H]owever, less than 15 percent of plastic packaging produced every year is recycled for future use and the rest ends up as waste,” he continues. “This is not sustainable. [P]epsiCo is supporting the development of a circular economy, which, one day, will enable us to recycle all of the plastics we buy and bring to market.”

Furthermore, the company’s Naked Juice brand has been working since 2009 to ensure its bottles of fruit and vegetable juices and smoothies are made from 100 percent rPET material, which also results in the company using 25 percent less energy than if it used virgin plastic, it says.

Additionally, the Coca-Cola Co. announced the debut of the HybridBottle, the company’s first package to be made with a mix of as much as 50 percent plant-based renewable and recycled PET material designed to reduce the amount of virgin PET plastic used in its 20-ounce bottles, it says.

Yes we (aluminum) can! 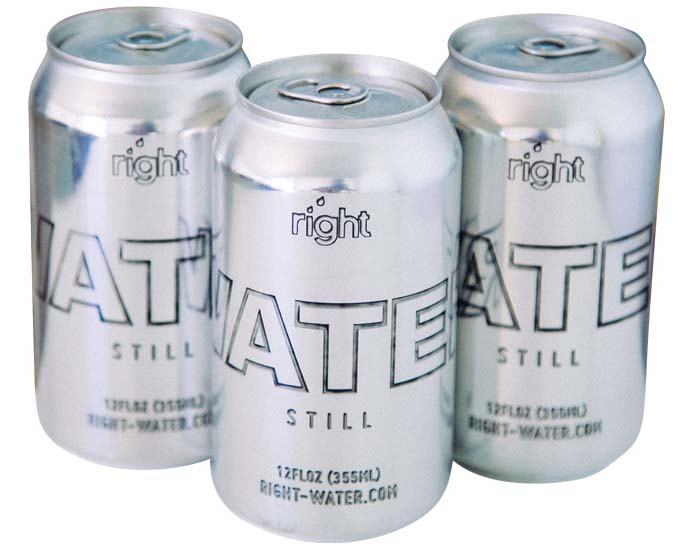 “Nearly seven in 10 Gen Z consumers use refillable water bottles, the highest usage among all generational groups,” he continued. “The vilification of plastic bottles represents an opportunity for beverage brands to elevate the simple aluminum can.”

Aluminum cans offer compelling environmental benefits as they are lightweight, durable, have a high recycling rate and are nearly infinitely recyclable, Bryant explains. Because of this, brands are “putting the pedal to the medal,” he said.

Taking it a step further, San Francisco-based Pathwater launched its self-titled line of purified drinking water in aluminum bottles, which consumers then can use as a refillable water bottle. Aluminum uses five times less energy to recycle than plastic and can be recycled over and over again without losing its quality, the company says.

As more consumers take interest in environmentally friendly packaging options, Mintel’s Bryant notes that packaged beverages brands will need to focus on sustainable options or risk the ire of Gen Z and other consumers.

“The onus lies with brands and packaging manufacturers to educate consumers on packaging,” he said. BI