In response to consumers who want more “pep in their step,” the energy drinks and mixes category is maintaining steady double-digit growth. In fact, the energy drinks category saw dollar sales of more than $11.7 billion in U.S. multi-outlets for the 52 weeks ending June 16, an 11.3 percent increase over the prior-year period, according to data from Chicago-based Information Resources Inc. (IRI). Up 13.2 percent, energy drink mixes also are flourishing, racking up sales of $110.3 million, IRI data states.

Energy shots, on the other hand, aren’t faring quite as well. Energy shots experienced a 2 percentage-point contraction and sales just more than $1 billion for the same time period, IRI data suggests.

Roger Dilworth, senior editor at New York-based Beverage Marketing Corporation (BMC), suggests that energy shot growth perhaps has flattened out due to a lack of competition. For instance, 5-Hour Energy shots, made by Farmington Hills, Mich.-based Living Essentials LLC, maintains the lion’s share of the market at nearly 91 percent and notched sales of more than $941 million in multi-outlets for the 52 weeks ending June 16, according to IRI data.

While the energy shots’ category suffers from a dearth of competition, the energy drinks’ market boasts several key players and “cut-throat competition” forcing companies “to come up with new innovations instead of resting on their laurels,” Dilworth states.

“The energy drink market grew by nearly 9 percent in volume in 2018 and is on track to increase by nearly 8 percent by volume in 2019,” BMC’s Dilworth says. “The segment has enjoyed a new catalyst with the emergence of more sports-oriented brands recently.”

Out with a ‘Bang’

One emerging brand, Bang, a brand of Weston, Fla.-based VPX Sports, took the No. 5 spot and saw triple-digit growth of 699 percent and more than $687 million in sales based on IRI data. Formulated with creatine, caffeine and branched chain amino acids (BCAA), Bang is available in a variety of flavors such as Black Cherry Vanilla, Cotton Candy, Peach Mango and Rainbow Unicorn.

“The energy drink brand Bang experienced meteoric growth, outperforming all-natural energy drinks and becoming one of the top brands in the entire market,” Mintel’s report states. “Bang features fun, unique flavors and caffeine levels outside the norm of most energy drinks. Bang’s rapid growth is due to the brand’s appeal among high-frequency energy drink consumers.

“High-frequency drinkers enjoy flavor variety and are most interested in highly caffeinated energy drinks,” the report continues. “… While Bang is experiencing massive growth, it is important to note that many of the factors that make it successful among high-frequency drinkers alienate medium/low frequency consumers.”

Furthermore, the report suggests energy drink manufacturers should focus on connecting with Generation Z, who report a decrease in their energy drink consumption compared with a year ago. Also influencing Gen Z’s weak engagement with energy drinks has been a renewed interest in health and wellness and the popularity of iced and ready-to-drink coffees, Mintel’s report details.

Yet, when it comes to consumption, Chicago-based Euromonitor International’s March “Energy Drinks in the US” report suggests that high growth rates of energy drinks have slowed since 2016 because its most popular partakers — younger consumers, teenagers, millennials and students — also are leading the general shift toward healthier, more natural products particularly as access to and awareness of health effects escalates in the food and beverage industries.

“As a result, regular energy drinks have seen the biggest drop-off in off-trade volume growth,” the report states. “Reduced-sugar energy drinks have fared a little better. … Opportunity exists to capture the healthier consumer. For instance, athletes have started to reach for energy drinks as a more fundamental alternative to sports drinks.

“Rather than just ensuring healthy hydration, energy drinks can provide them with pre-workout stamina and reinvigorate them post-workout,” the report continues. “Another opportunity exists among reduced-sugar energy drinks. Since reduced sugar varieties have experienced more success, manufacturers can also look to expand those options and emphasize their lower sugar content and healthier ingredients.”

BMC’s August 2018 “U.S. Energy Drinks through 2022” report notes that energy drinks are “hot” in the third quarter, the time when thirst quenchers and/or refreshment beverages including bottled water, sports drinks and carbonated soft drinks sell the most.

As the energy drinks’ segment has matured, the report notes that key players like Red Bull North America, Santa Monica, Calf.; Monster Energy Corp., Corona, Calif.; and Rockstar Inc., Las Vegas, have been competing to add extensions in related hybrid categories. “One such bet that has paid off richly was pioneered by Monster: coffee energy drinks,” the report states. “The dairy-based items carry a super-charge of caffeine but also meet consumers’ penchant for drinking coffee, broadening the base of energy consumers.”

For instance, Monster’s Java Monster line proved popular as a masculine alternative to the Starbucks and PepsiCo added the DoubleShot + Energy coffee/energy brand, which surpassed Java Monster in sales, according to BMC’s report. This spring, the companies released Tripleshot Energy in three flavors: Caramel, Caffè Mocha and French Vanilla.

“There is plenty of room for both energy drinks and RTD coffee to flourish,” BMC’s Dilworth says. “Just as energy drinks have gotten a punch in the arm with new formulations, RTD coffee received a boost with the emergence of [the] cold-brew segment.”

In addition to consuming RTD coffee-based energy drinks, consumers also are looking for less expensive, more on-the-go options to fuel their busy lives. This has sparked a resurgence in sales for private-label energy drink mixes.

With 29 percent market share, private-label brands ranked No. 1 with $32 million in sales in multi-outlets for the 52 weeks ending June 16, a 14.5 percent increase over the prior-year period, IRI data states. Crystal Light Energy On The Go and ZippFizz came in No. 2 and No. 3, respectively, with sales of $26 million and $22.6 million, respectively.

Functionality, a reduction in sugar, and natural and organic ingredients also are bolstering the energy drinks category.

“Using tea or matcha as a source of caffeine, as well as including fruit juices or coconut water as a more natural source of sugar and vitamins … is leading to energy drinks being considered also for their functional benefits rather than just an energy boost,” Euromonitor’s March report states. 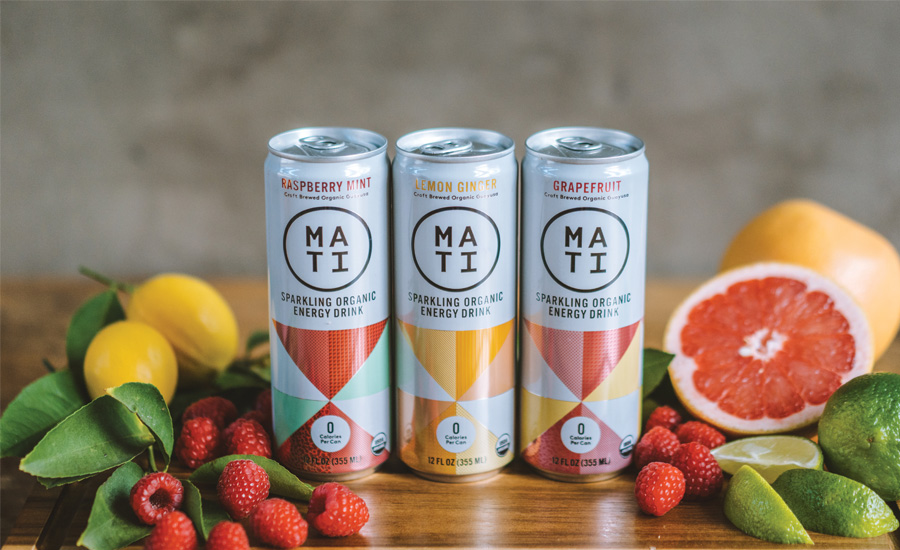 One organic craft-brewed energy drink brand, Durham, N.C.-based MATI Energy issued a challenge for the month of July — for Americans “to declare their independence” from the crash that people might experience with coffee and energy drinks by switching to the certified organic energy drink brand for one month. MATI Energy is brewed with only three organic ingredients: guayusa, fruit juice and carbonated water, according to the company. MATI features guayusa, an Amazonian tea leaf with naturally occurring caffeine and nearly double the antioxidants of green tea, the company says. Supporting sustained energy, the energy drink also contains theobromine and L-theanine, it adds.

BMC’s Dilworth suggests there has been several attempts by “healthy” energy drink brands to gain traction with the use of better or organic ingredients. “This did not create much breakthrough,” he says. “However, the emergence of ingredients known in the sports nutrition area, such as creatine and BCAAs — which one would have thought would impact the sports drink market are impacting the energy market instead in a positive way.”

BMC’s Dilworth affirms that energy drink volume should grow at about a 6 percent compounded annual clip for the next five years, while energy shots are anticipated to continue a slow decline. Innovation is critical for future category success, experts say.

“To achieve their continued fairly high growth, energy drink companies will continue to innovate,” Dilworth explains. “Not all product introductions will be successful, but the marketers will continue to experiment. One possible area is to continue exploring the sports nutrition angle, perhaps with even other ingredients like D-ribose or L-arginine, or maybe even more explicitly into even more exotic ingredients such as found in ‘male vitality’ products.” BI

Flexibility vital for can filling and seaming equipment

No alcohol trend rising in prominence

PepsiCo to acquire Rockstar Energy Beverage for $3.85B