Retro cocktails, pop-up bars with themed cocktail creations, tasting events and consumers seeking “Instagram-able” ideas are helping to drive foot traffic to the relatively flat on-premise channel. While more consumers are drinking at home rather than “out on the town” at nightclubs, bars and restaurants, the cocktail craze and a wider variety of spirits and craft beers from which to choose fueled $26.7 billion in alcohol sales from 2013-2018, growing at an annualized rate of 2.9 percent during the past five years, states Los Angeles-based IBISWorld’s December 2018 “Bars & Nightclubs in the US” report.

Bar and nightclub operators have responded to changing preferences and increased competition by diversifying into new and niche concepts such as wine bars, cocktail lounges and brewpubs to attract new demographics, the report states.

“The Bars and Nightclubs industry has shaken (not stirred) up some growth over the five years to 2018, as consumer confidence and overall spending have continued to steadily increase,” the report says. “The industry is highly dependent on factors that influence the overall domestic economy as well as consumer drinking patterns.

“… In fact, revenue growth only began to speed up in 2015, increasing 3.8 percent that year alone,” the report continues. “Over the past five years, consumer expenditure on alcohol has only grown at an annualized 0.2 percent.” 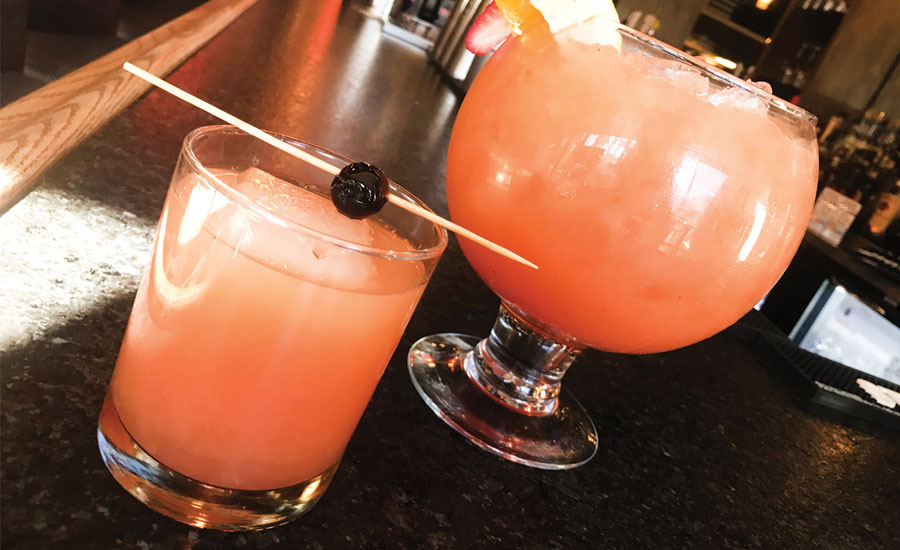 Many restaurants and bars offer signature limited-edition cocktails on-premise for holidays. In honor of Fat Tuesday on March 5, Therapy restaurant in downtown Las Vegas served up a retro Shirley Temple of Doom, mixed with a choice of three liquors, orange juice, grenadine and ginger ale. (Image courtesy of Therapy)

Chicago-based Mintel’s April 2018 “On-Premise Alcohol Trends US” report points to a slight net decrease in total on-premise alcohol consumption, which it attributes to steep declines among women, older consumers and lower-income households. Although more consumers are experimenting with unique cocktail combinations at home, those who are visiting the channel are ordering more expensive drinks when they do go out, the report states.

“A majority of drinking occasions occur within the home, and while consumers enjoy going out for a drink for specific [special] occasions, a majority of consumers say they prefer drinking at home,” the report states. “Furthermore, this sentiment is shared across all demographic groups. Bars/restaurants must work harder than ever to provide consumers with unique drinking experiences or lose out to at-home drinking occasions.”

In its June 2018 “Spirits in the US” report, Chicago-based Euromonitor International affirms that cocktails are the gateway to new spirits. “In 2017, due to the diversity of spirits, for the first time, local consumers are prioritizing origin over brand loyalty,” the report says. “The bar patron’s hunger for novelty in cocktails has spurred a wider variety of interesting spirits and greater shelf space is being dedicated to other distilled spirits.

“This means that the smaller brands of traditional spirits are being pulled from the bar shelves,” it continues. “From cachaça to aquavit, the cocktail craze is fueling the growth of these international spirits through on-trade sales. In addition, once discovered, the spirit is often purchased through off-trade by consumers as part of the [do-it-yourself] (DIY) mixing culture.” 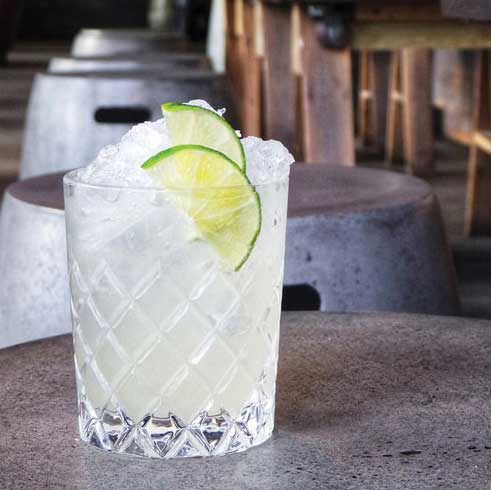 Even though growth is moderate, premium and luxury brands continue to outpace growth versus moderate or value brands, he says. “We see a move toward ‘simplified cocktails’ with fewer ingredients but higher quality — allowing those flavors and mixers to shine through,” Edwards says. “Low ABV or ‘better-for-you’ cocktails are gaining momentum. Spritzes, flavored seltzers, craft and artisanal continue to grow as well as brands with a genuine story.

“Brown goods continue to climb, all things agave including mezcal, and gin is having a nice resurgence,” he continues. “Amaro, herbal, and bitters continue to expand their presence in cocktails as the American palate for IPAs, robust coffee and bitter greens expands our flavor horizons. Aperol and chartreuse are just two examples.”

Also finding a home within creative, lower-calorie ABV cocktails are fortified wines, ports, vermouth and sherries while frozen is back, Edwards says. “Lots of folks are going above and beyond the frosé craze and are doing everything from frozen dark ‘n stormies to negronis,” he adds.

“While craft remains the fastest-growing segment of beer in restaurants, bars and other on-premise segments, we’re tracking a softening of the category’s growth trajectory due to the fact that the major brands are challenged,” says Donna Hood Crecca, principal of Chicago-based Technomic. “The appeal of the largest craft beer labels appears to be waning as craft consumers opt for smaller brands. In addition, Mexican and Belgian imports continue to grow on-premise. These trends indicate differentiated flavor profiles, unique origins and local brand positioning are highly appealing for beer occasions in restaurants and bars.”

Within the on-premise spirits channel, Hood Crecca notes that the smallest category, whiskey, along with vodka are the Top 2 sellers. “Whiskey, driven by the ongoing upward trajectories of straight American and Irish, is the growth driver, although vodka remains the largest spirits category on-premise,” she explains. “Vodka, of course, is a vitally important category; however, its growth largely stems from the ongoing expansion of Tito’s Handmade. Aged rum, brandy and Cognac are also performing well on-premise, demonstrating the high appeal of barrel-aged spirits to today’s consumer.”

Eric Schmidt, director of alcohol research at New York-based Beverage Marketing Corporation (BMC), agrees. “Irish whiskey leads in growth on-premise. Overall, whiskey, driven by the upward trajectories of straight American and Irish, is the growth driver, although vodka remains the largest spirits category on-premise,” he says. “In addition, the category offers luxuries attractive to millennials along with the growth of craft distillers and a diverse portfolio of segments.

“Momentum remains the headline for both imported and craft beer, while declines in domestic light and regular beer continues [within] on-premise,” Schmidt continues. “Notable is the lack of growth among the leading craft beer brands while the remainder of the category collectively continues to add case volume.”

Rachel Hyland, lead industry analyst at IBISWorld, also notes the changing consumer preference landscape in on-premise beer. “Traditionally, large nationally branded beers, especially light beers have been a popular drink at bars and nightclubs. Over the five years to 2019, however, craft beers have surged in popularity among consumers, changing the consumer preference landscape,” she says. “Craft beer is no longer an alternative limited only to local brewpubs and small-time hobbyists. Consumers have increasingly purchased craft beer for its perceived higher quality, greater attention to detail, finer ingredients and wider variety of flavors as compared with traditional light beers.”

The fact that craft brews typically come with a higher price tag than the light beer alternatives has not dissuaded consumers, she adds. “[G]rowth in disposable income in the U.S. has made this a nonissue for many individuals looking to drink at a bar or restaurant. … The increased price of craft beers has benefited bar and nightclub operators by increasing their overall revenue figures and ultimately, profit margins.”

Matt Drummond, client solutions manager at New York-based Nielsen CGA, affirms that the spirits category has shown the “best strength” during the past 52 weeks with most segments in growth. “Tequila and Cognac have the highest growth while bourbon continues to dominate all whiskey,” he says. “The local trend has shifted share within vodka with American vodka showing unprecedented growth. Through our CLIP (Check Level Insights Pool) data we can see that the most ordered cocktail overall is the Margarita, with Bloody Mary’s and mimosa most popular at brunch and martini and Long Island most popular later in the evening.”

When it comes to drinking wine at bars and restaurants, results from market analysts are mixed.

IBISWorld’s report notes that wine has surged ahead in recent years as a result of it being a comparable beverage offered at high-end cocktail bars and points to the increasing popularity of wine bars during the past 10 years.

Aga Jarzabek, research associate at Euromonitor, notes that on-premise wine sales are steadily increasing. “Right now, wine is dominated by reds, and sparkling wines are contributing to growth more and more each year. [They] beat out reds and whites in terms of growth,” she says. “Although no concrete data exists for canned wine in terms of on-premise sales, the packaging format offers a lot of promise for on-premise channels.”

When considering value and price, Euromonitor’s June 2018 “Wine in the US” report notes that on-premise wine consumption is sluggish and consumers may be using their discretionary income on direct-to-consumer (DTC) shipments for higher quality wine without the barrier and higher costs and markup of purchasing wine on premise.

Even though wine is a popular among millennials, especially women, IBISWorld’s Hyland notes the emergence of wine-of-the-month clubs are further impacting on-premise wine sales. “Companies such as Winc have developed wine-of-the-month clubs or monthly delivery boxes, where consumers can get a curated box of wine delivered straight to their door … for much cheaper than they can at a bar,” she explains.

As to what role cannabidiol (CBD) and tetrahydronnabinol (THC) might have on the on-premise channel, Nielsen’s Drummond responds: “Ah, yes, the $20 billion question. The off-premise THC market is seeing a shift from flower sales to edible and drinkable products, but those products have a way to go to satisfy consumers on taste and desired effect. That shift toward non-smoked products will ultimately make THC’s transition into the on-premise more acceptable.”

Even though the on-premise channel will continue to contend with competition due to a wide array of choices and at-home alcohol consumption, IBISWorld’s report forecasts on-premise performance to remain relatively steady. “Industry revenue is forecast to increase at an annualized rate of 1.5 percent to $28.8 billion,” the report states. BI

Flexibility vital for can filling and seaming equipment