Human bodies are comprised of about 70 percent water, which allows the body to deliver oxygen, manufacture hormones, convert food for digestion and much more. As consumer preferences continue to trend toward better-for-you options, industry experts are seeing the connection between consumers wanting healthy-halo beverages and the continued growth of bottled water sales.

For the second consecutive year, the International Bottled Water Association (IBWA), Alexandria, Va., and New York-based Beverage Marketing Corporation (BMC) announced that bottled water is the No. 1 beverage in the United States, by volume.

PET still water saw a 5.9 percent increase in the first quarter of 2018, and domestic sparkling and imports grew 34.7 percent and 5.9 percent, respectively, during that same timeframe, it adds.

“The bottled water category has been experiencing robust growth since the early ‘90s, driven primarily by consumer demand for healthier refreshment,” says Gary Hemphill, managing director of research at BMC.

New York-based IBISWorld experts echo similar sentiments about the popularity of bottled water. “Demand for industry products has shown some growth, mainly attributable to consumers turning away from substitutes such as juice and sodas with high sugar levels,” the company said in its July “Bottled Water Production in the US” report.

The bottled water category has grown 2.2 percent in 2018 alone, the report states.

“As the quintessential portable and affordable beverage, bottled water introduces new usage and occasion habits,” he continued. “Suitable for consumption at any time of the day or night, and not necessarily in need of being kept ice cold, bottled water simply is the preferred beverage not only for consumers aiming to reduce caloric intake or lessen artificial sweetener usage but also for consumers of all kinds.”

A year at a glance

As the bottled water category continues to see growth across all segments, experts note the demand comes from consumers in search of healthier alternatives to carbonated soft drinks (CSDs).

BMC predicts that bottled water will reach 50 gallons per capita within the next few years, as well as reaching as much as $23.9 billion in sales by 2022.

Data from Chicago-based Mintel also points to steady growth. “The bottled water category’s growth continued through 2017 with a 35 percent leap in sales over the past five years,” states Mintel in its February report titled “Bottled Water – US.” “Lead by consistent double-digit growth in the sparkling water segment, sales increased across all three segments (convenience/PET, sparkling, and jug/bulk still water) contributed to overarching success.”

Although the category has seen growth in all segments, BMC attributes retail PET water for much of the market’s growth. Domestic non-sparkling water represented 96.1 percent of total volume in 2017, it says in its August report. 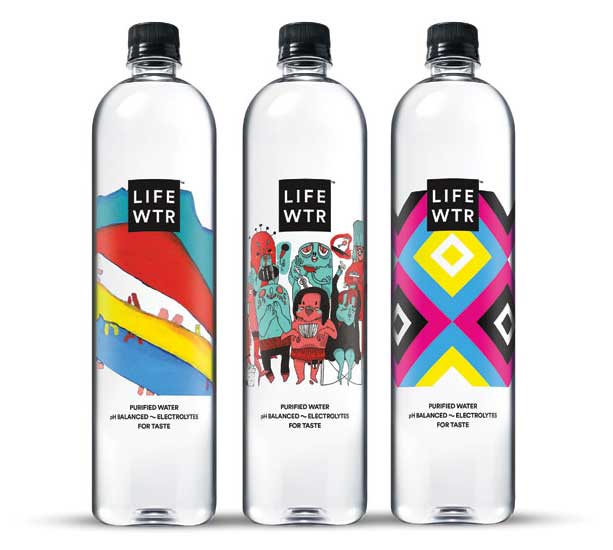 PepsiCo bolstered its bottled water portfolio until the launch of its LIFEWTR, which now accounts for nearly $1.1 billion for the 52 weeks ending Aug. 12, in total U.S. multi-outlets and convenience stores, BMC and IRI data indicates. (Image courtesy of PepsiCo)

Seltzer water also gained ground in volume and market share in 2017. The segment saw an increase of 10.2 million gallons to 201.6 million gallons, with a market share of 75.7 percent, BMC data indicates. Additionally, seltzer is expected to increase at a compound annual growth rate (CAGR) of 5.8 percent by 2022, it says.

“The primary growth driver over the years has been the retail PET segment, essentially single-serve bottles of non-carbonated water,” BMC’s Hemphill says. “That said, all segments of the category are experiencing growth. More recently the category has begun to evolve and we’ve seen exceptional growth from sparkling water.”

In its August report, BMC predicts that domestic sparkling and imported water will remain a top player and should increase their shares of the U.S. bottled water market by volume, within the next five years.

Based on an anticipated CAGR of 4.8 percent, domestic retail PET water should account for 69.5 percent of total bottled water volume by 2022, the same as 2017, the report says. This potentially could slightly lag the market, it adds.

BMC also predicts domestic sparkling’s share to rise from the 2.1 percent in 2017 to 4.6 percent in 2022, while imported water should see a 0.4 percent increase in the same timeframe.

Although water of all types is expected to see continued success in the market, some experts note that category growth eventually could begin to taper. “Though the category benefited from the perpetuation of better-for-you trends and concerns over sugar content in previously favorited drinks, sales may be beginning to taper,” Mintel’s report states.

“Innovation is happening throughout the beverage industry, as brands make moves to develop new flavors, increase functional offerings and borrow benefits across the category to appeal to new consumer sets,” it continues. “As such, bottled water brands will face more competition from outside the category than ever.”

Despite being the fastest growing segment, flavored and unflavored sparkling waters still possess a relatively low reach among consumers, the report says. While a large source of growth can come from current consumers drinking more, to reach their full growth, brands should focus on broadening their consumer base to consumers who are slower to adapt to the products such as Generation X, it explains.

To perpetuate strong growth, water brands will need to broaden their consumer base and educate consumers on what their biggest differentiating claims actually mean, Mintel states. Keeping language and labeling simple, but packaging unique will help appeal to a wide variety of consumers, it adds.

FIJI Water, a brand of Los Angeles-based The Wonderful Company LLC, has innovated its packaging to resonate with consumers. “Fiji broke ground in a number of ways, from its much-imitated packaging (with an interior graphic visible through the liquid) to its ability to travel in sophisticated venues without offering a glass packaging,” BMC’s report says.

IBISWorld also notes the popularity of FIJI Water, but in a different way. “Similarly, a growing number of consumers are demanding imported bottled water that comes directly from remote locations,” the report says.

“Brands like FIJI Water increasingly are popular among health-conscious bottled water drinkers, which has resulted in growing demand for foreign-bottled products.”

Although category stalwarts will have to continue to innovate their products and packaging in order to keep up with consumer trends, BMC experts predict a bright future for bottled water. “While some segments are growing faster than others, we think it is likely we will continue to see growth in all segments of the category in the years ahead,” Hemphill says. “... We believe the future is bright. Bottled water is the perfect refreshment beverage.” BI