The saying suggests that less is more. Although consumers’ desires for customized food and beverage options have contributed to SKU proliferation, American shoppers also are purchasing products based on value. To attain that value, consumers are frequenting various retail channels such as dollar store chains and limited-assortment retailers.

“Limited-assortment stores, dollar stores and supercenters are the fastest-growing segments of the brick-and-mortar retail food industry,” says Jon Hauptman, senior director of retail for Long Grove, Ill.-based Inmar Willard Bishop Analytics. “They’re primarily driving competitive advantage by providing exceptional value, but there’s more to it than that. Limited-assortment stores such as Aldi have been significantly upgrading the shopping experience with brighter stores and new, interesting products not found elsewhere. Additionally, dollar stores have been continuing to expand their assortments of food as well as their store counts across the country.”

For instance, Batavia, Ill.-based Aldi Inc. announced last year that it was investing $1.6 billion in its stores, which includes plans to remodel and expand more than 1,300 U.S. stores by 2020. The modern design of the remodeled stores features open ceilings, natural lighting and environmentally friendly building materials, according to the company.

As these retail outlets ramp up their appearances and assortments, they’re attracting consumers who are turning to them to fulfill various need states. For example, Hauptman notes that limited-assortment retailers tend to offer a limited supply of products that will not be replenished, thereby prompting consumers to visit these retailers more often.

“Limited-assortment stores are satisfying consumer need for value as well as for a ‘treasure hunt’ experience,” he says. “Shoppers can get more bags of groceries for their weekly shopping budgets at these stores, but that’s not all. Limited-assortment stores such as Aldi and Lidl also have robust assortments of interesting in-and-out general merchandise at extremely low prices, available only while supplies last that gives shoppers reasons to keep returning to the store to see what’s new.”

When it comes to dollar store chains, these outlets are appealing to consumers’ quick-trip shopping experiences, says Scott Scanlon, principal and team leader of the beer, wine and spirits vertical for Chicago-based Information Resources Inc. (IRI).

“Dollar retailers most often fulfill quick trips when defined as less than a $50 basket and special purchase items, two [to] 10 items of less variety specifications of $20-$50 basket size,” he says. “It’s really serving a niche need, some quick-trip pantry-stocking type of items.”

Citing IRI data for the 52 weeks ending Dec. 3, 2017, Scanlon says that the dollar channel grew 2.2 percent in terms of dollar sales and 1.3 percent for unit sales.

When it comes to these value stores, experts express differing viewpoints in regards to whom are the most likely to shop within these retail outlets.

“What we’re seeing is households with less than $25,000 annual income over index compared with the average stores,” Scanlon says. “Using dollar stores on the proxy, suggests [that] households on a budget frequent these retailers to a higher degree.”

However, Inmar’s Hauptman says limited-assortment stores have begun to appeal to a more diverse base.

“While limited-assortment and discount stores were originally founded to appeal to shoppers with lower incomes and limited budgets, their growth is now fueled by their ability to expand their appeal to a much wider range of demographics,” he says. “Today, you’ll find high-performance cars in the parking lots of many limited-assortment and dollar stores. During the economic downturn about nine years ago, consumers fundamentally changed the way they shopped and began focusing on ‘value,’ and have not fully returned to their old, free-spending ways.”

In addition to broadening their shopper base, limited-assortment retailers are looking to diversify their location base.

“Much of the growth of limited-assortment stores has been from expanding into new geographies,” Hauptman says. “For example, Aldi has made a strong push to the western U.S. [by] opening a large number of stores, mainly in suburban areas of new markets.”

With plans to open new stores across the United States, Aldi announced a $3.4 billion capital investment to expand to 2,500 stores nationwide by the end of 2022, it reported last year.

“We pioneered a grocery model built around value, convenience, quality and selection, and now Aldi is one of America’s favorite and fastest growing retailers,” said Jason Hart, chief executive officer of Aldi, in a statement. “We’re growing at a time when other retailers are struggling. We are giving our customers what they want, which is more organic produce, antibiotic-free meats and fresh healthier options across the store, all at unmatched prices up to 50 percent lower than traditional grocery stores.”

On the other hand, dollar store chains are seeing stronger performance in more rural locations.

“Dollar and convenience retail have the strongest sales performance in the rural areas due to increased trip spend and more frequent trips to these retailers,” IRI’s Scanlon says. “Often these retailers are the only choice in less-populated areas.” 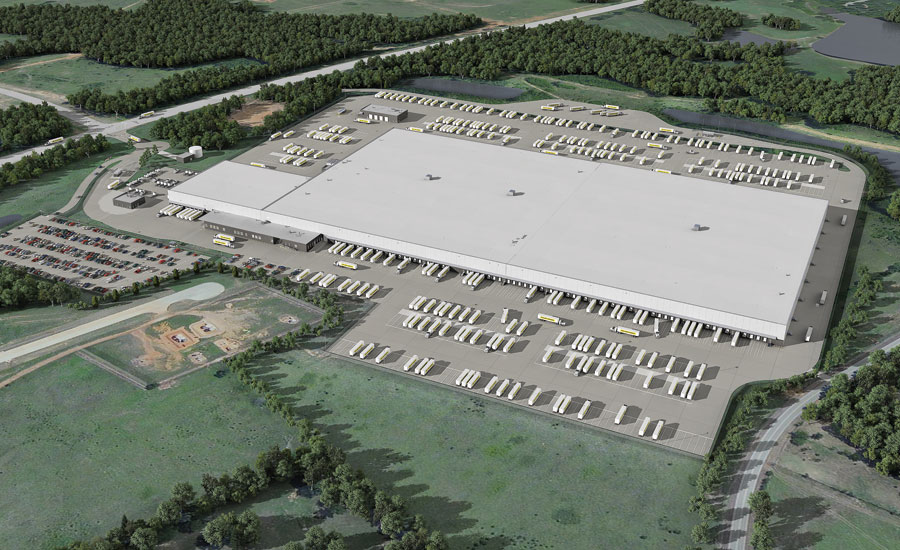 “Dollar General is excited to expand our supply chain and distribution operations in the Lone Star state with today’s announcement,” said Todd Vasos, Dollar General chief executive officer, in a statement. “This facility is expected to support Dollar General’s growing store count in Texas, where we already operate more than 1,400 current locations and have complementary operations in San Antonio. We look forward to the facility helping better serve our customers with value and convenience, as well as creating career opportunities for approximately 400 future Dollar General employees.”

In its June 14, 2017, Insights titled “Deep Discount Grocery Stores Are Gaining Share With Store Brands,” New York-based Nielsen points out that deep-discount retailers are much more focused on store brands than other channels.

“One channel worth focusing on is deep discounters that offer value and heavy discounts (not including dollar stores),” the Insight states. “For many retailers, but particularly deep-discount retailers, store brands (also referred to as private label) play a strategic role for winning over shoppers from other channels. Compared to other major retail channels, deep discounters have more than twice the store-brand share of dollar [stores].”

According to Nielsen Homescan data for total U.S. outlets for the 52 weeks ending April 29, 2017, store brands account for 49 percent of product share within deep-discount retailers. In comparison, dollar stores’ private-label selection is 18 percent of its share.

Yet, when it comes to which departments feature store brands that comprise the majority share of sales, the Insights listed three: dairy (72 percent), grocery (52 percent) and frozen food (53 percent).

“This is driven by both penetration and trips, with consumers making more trips to purchase store-brand grocery, dairy and frozen products (up 3.3 percent, 5.7 percent and 3.7 percent in trips, respectively, compared to the prior year) than trips made for branded products from these departments,” the Insight states.

With store brands accounting for just less than half of the product share in deep-discount retailers, companies are investing in more ways to capitalize on these brands. 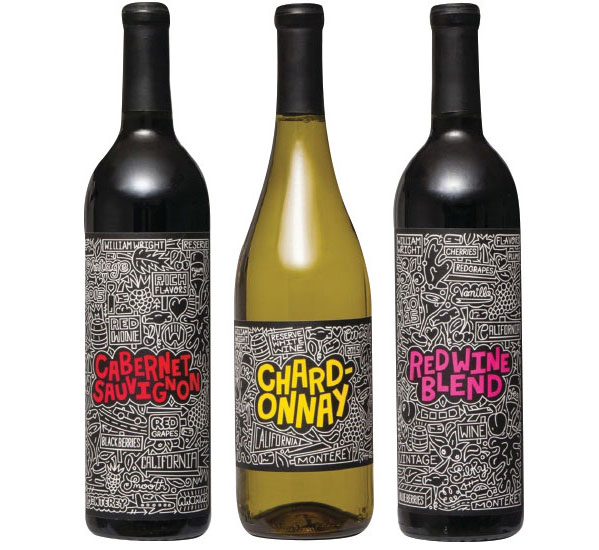 Aldi expanded its wine selected and partnered with artist Timothy Goodman. Comprised of a Chardonnay, a Cabernet Sauvignon and a Red Wine Blend, the limited-edition reserve collection features Goodman’s hand-illustrated style across its labels. (Image courtesy of Aldi Inc.)

This winter, Aldi expanded its store brand wine selection and partnered with artist, designer and illustrator Timothy Goodman. Comprised of a Chardonnay, a Cabernet Sauvignon and a Red Wine Blend, the limited-edition reserve collection features Goodman’s hand-illustrated style across its labels.

“As a visual person, shopping for wine begins with the label,” Goodman said in a statement at the time of the release. “I gravitate toward bottles with interesting designs, so I was excited to create a series of labels that would really pop on shelf.”

Although beverages can be valuable to limited-assortment retailers to bolster basket size, they typically do not serve as a destination category for shoppers, experts note.

Beverages are valuable when it comes to sales and growth within dollar stores, but they still are not a destination purchase, IRI’s Scanlon says.

He adds that the carbonated soft drinks category is the top sales performer among beverage categories within the channel.

With the ability to thrive in various locales and appeal to diverse consumer bases, analysts expect these channels to experience more sales growth and expansion.

“The future for limited-assortment and discount stores is bright provided they keep to their traditional small-store model and continue to enhance the in-store shopping experience with bright stores and interesting products,” Inmar’s Hauptman says. “Consumers are still looking for value and will continue to shop those stores that are best at offering great values.” BI