In rapper Lil’ Dicky’s hit song “$ave Dat Money,” he sings about how rappers should focus on saving money rather than spending it. The chorus ends with “What we do? We gone save that money.” Although used in a different context, dollar and limited-assortment stores are upgrading their offerings and allowing consumers to “save that money” when shopping for consumables.

“Discount retailers are increasingly stocking their shelves with consumables because that is what is driving the demand,” says Claire O’Connor, industry analyst at Los Angeles-based IBISWorld. “Previously, they were known for carrying discontinued or random items, but now operators are increasingly stocking their shelves with food and beverage products in an attempt to increase daily foot traffic.”

The dollar and limited-assortment channel has been a bright spot for the category, experts note. Jon Hauptman, senior director of analytics at Winston-Salem, N.C.-based Inmar, recognizes the increased performance of the category. “Discount formats featuring limited-assortment stores such as Aldi, Lidl and Save-A-Lot, and dollar stores such as Dollar General and Family Dollar grew dollar sales of approximately 6.6 percent last year, far outpacing retail food as a whole, which grew dollar sales of only 2.1 percent,” he says. 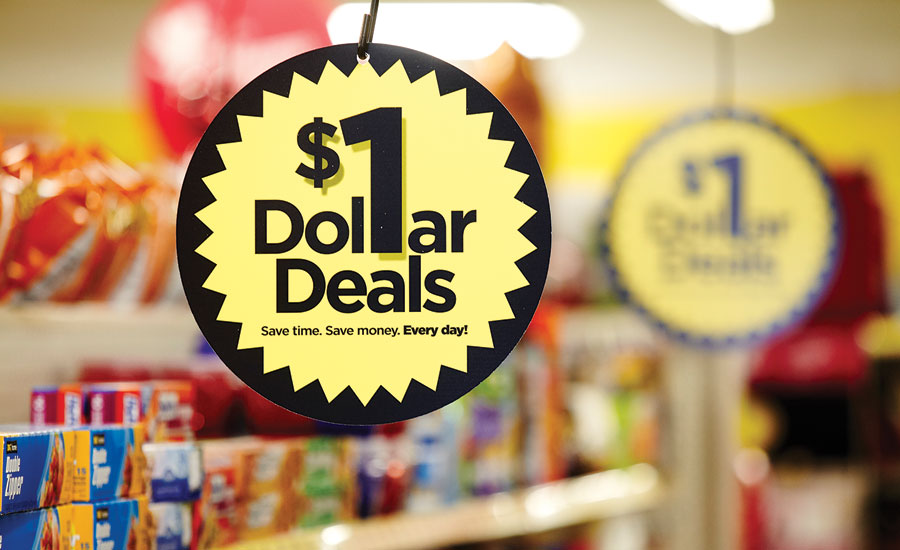 The demographics of discount retail shoppers has shifted as more consumers are associating saving money on consumables as a form of wealth, experts note. (Image courtesy of Dollar General Corp.)

When it comes to innovation, Aldi is dominating the discount retail channel by continuously developing new, interesting items to keep attracting shoppers, he adds.

“A second driver of the discount growth trend is that limited-assortment stores such as Aldi are rolling out expanded fresh offerings (produce, meat, etc.) as well as new premium and specialty foods that tend to attract a wider demographic of shoppers than traditional budget-focused shoppers,” Hauptman explains.

Similarly to Inmar’s Hauptman, IBISWorld notes that the dollar and variety stores industry is a top performer, particularly during the past five years to 2018, it states in its November 2018 report titled “Dollar & Variety Stores in the US.”

“A substantial platform for change within the industry has historically targeted exclusively low-income earners, [but] this consumer pool has expanded in recent years to include middle-class shoppers and even some high-income earners,” the report states.

“Bargain shopping has become an increasing point of pride for many wealthy consumers, and this trend has drastically increased the industry’s customer base,” it continues. “As a result of this expansion, IBISWorld estimates that industry revenue has increased at an annualized rate of 2.8 percent, totaling $77.4 billion over the five years to 2018.”

Inmar’s Hauptman echoes similar sentiments on the changing demographics of discount retail shoppers. “Historically, discount retailers have been largely shopped by middle-income to lower-income households, i.e., those households that are looking to stretch their weekly shopping budgets,” he says.

“However, this is changing,” he continues. “We’re now seeing a wider demographic of shoppers visiting discount stores. This shift is being driven by discount operations ‘refreshing’ their store formats to make them brighter and more appealing, and developing innovative, new and exclusive products.”

“Well-to-do millennials are also flocking to dollar stores and have become core customers for retailers in the space that now have the challenge of retaining these fickle, tech-obsessed shoppers,” it says.

IBISWorld’s December 2018 report also highlights the millennial effect on discount retailers. “Millennials, in particular, are a bargain-hunting generation who have become increasingly prone to shopping at dollar and variety stores,” it says. “As the consumer pool has expanded to include wealthier shoppers, some industry operations have been able to raise prices, which has contributed to profit growth.

“IBISWorld estimates that industry profit will stand at 4.2 percent of industry revenue, which is higher than the industry’s historical average,” the report continues.

As more and more retailers are delving into the consumable eCommerce market, discount retailers could potentially be facing drawbacks. “Traditionally, discount stores were able to stay competitive through their prices, but now online retailers are able to offer similar prices due to lower overhead costs, as well as increased convenience and accessibility,” IBISWorld’s O’Connor says.

“Furthermore, consumers are able to shop online for the best price, so they are increasingly choosing to shop around rather than going to a specific brick-and-mortar store because when shopping in-store, there is no guarantee that they are purchasing the product at the best price,” she adds.

The eCommerce channel has become difficult for dollar stores’ value proposition of rock-bottom pricing, Mintel’s report notes. “This conundrum becomes a challenge for dollar stores especially as their core clientele shifts to comprise a higher percentage of millennials and higher income consumers in general,” it says in regards to the eCommerce channel. “These same shoppers also operate their lives online and expect to able to shop via whichever channel they choose. They may not be willing to embrace the dollar store business model in the future, especially without a viable way to purchase online and/or if comparable or better options are available at other businesses.”

Although eCommerce could threaten the limited-assortment and dollar channel, retailers are finding ways to partner with eCommerce rivals rather than solely compete with them, experts note. “To combat the rapid expansion of eCommerce, discount retailers have begun building their own eCommerce offerings,” Inmar’s Hauptman says. “[For example,] Aldi is partnering with Instacart to offer online shopping at their stores across the country.

“Dollar stores are also finding that they need to have eCommerce offerings to stay relevant in today’s increasingly competitive retail market,” he continues. “Operating eCommerce dollar stores profitably will certainly be a challenge given the channel’s already low margins. While dollar stores are just getting started with eCommerce, it will be interesting to see if they try to carve out a unique niche by becoming the unquestioned leader in eCommerce in selected categories in which they already excel in serving both households and businesses, as well as the ‘treasure hunt’ for shoppers looking for interesting bargains.”

Going forward, dollar and limited-assortment stores will have to expand their offerings in order to stay pertinent. “Customers expect to have an omnichannel shopping experience and seek innovation from dollar stores including more name brands and better grocery selections,” Mintel’s report says. BI