eCommerce will be key to future growth for channels

As the saying goes, “When life gives you lemons, make lemonade.” The world was given a batch of particularly sour lemons last year with the outbreak of COVID-19. As a result, retailers have worked hard to adapt by making their stores as safe and convenient for consumers as possible. Despite all the challenges they’ve faced, some retailers have learned how to “make lemonade.”

The dollar channel, for instance, grew more than 19 percent last year in response to the economic fallout from the pandemic, says Joan Driggs, vice president of content and thought leadership at Information Resources Inc. (IRI), Chicago. By comparison, the channel grew nearly 13 percent in 2019.

“And this is at a time when shoppers were curbing visits to the store and when they did shop, they gravitated to retailers that could fulfill as much of their list as possible,” Driggs explains. “Grocery stores (brick and mortar), for example, grew just 1 percent in 2019, but they grew more than 16 percent in 2020.”

Moreover, eCommerce grew 59 percent last year, demonstrating consumers’ desire for a one-stop shop, Driggs says. Yet, even though the eCommerce and grocery channels were the top performers last year, the dollar channel took the No. 3 spot thanks to its somewhat diverse portfolio, she says.

“While [the dollar channel] may have more limited assortment, it’s not as limited as drug or convenience, and people are able to fulfill a lot of their shopping needs in one stop,” IRI’s Driggs says.

Discount retailers also offer the value that both low-income and higher-income households are seeking during a down economy, Driggs adds.

“Most people shop discounters in-store and love the treasure hunt aspect of doing so, but consumers will increasingly expect to shop this channel online as well, and retailers must deliver these expectations and find a way to do so profitably,” she says. 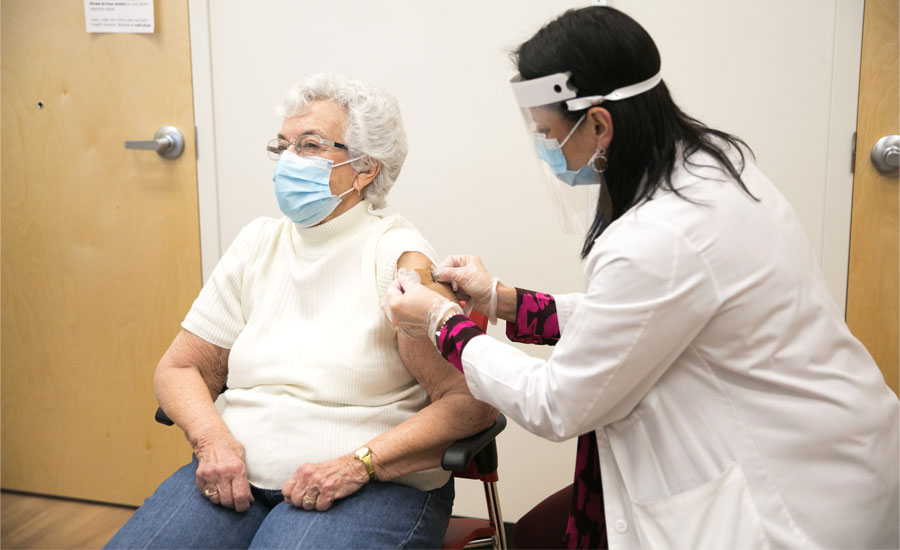 The drug store channel was essentially flat in 2020, but distribution of COVID-19 vaccines this year offers an opportunity to grow, IRI’s Driggs says.

“Especially for two-dose vaccinations — it’s two opportunities to engage with shoppers in the store,” she says. “It’s a great way for the retailer and brand partners to incentivize shoppers while they’re in the store.”

For instance, retailers can offer gift cards to customers who are vaccinated in the store. Or, they can offer discounts on particular brands either as a reward for getting vaccinated or simply to promote healthful products, Driggs notes.

Toward the beginning of the pandemic, drug stores were a popular place for consumers to stock up on over-the-counter (OTC) medicines, household care products and personal care items, Mintel’s Smith says. According to Mintel research, 17 percent of adults say they are shopping drug stores more often during the pandemic. Yet, one-stop shops like grocery stores, mass merchandisers and eCommerce still are out-competing them.

Similar to discount retailers, drug stores are negatively impacted because of their limited range of grocery items, Smith says. They’re also being affected by consumers avoiding the doctor unless it’s necessary. As a result, fewer prescriptions have been ordered, she explains. Furthermore, mask wearing and social distancing are causing a lower incidence of colds and the flu, which in turn impacts sales of OTC products designed to fight these ailments, she says.

According to data from New York-based Nielsen, beverage sales dropped 5 percent in U.S. drug stores during the 52 weeks ending Dec. 26, 2020.

On the other hand, COVID-19 testing and flu vaccinations helped to drive consumer traffic to the channel, Mintel’s Smith notes. In fact, in October, CVS Health President and Chief Executive Officer Larry Merlo claimed that the retailer had administered more than 5 million COVID tests.

"CVS Health is already providing 70 percent of the testing done in a retail setting through its test sites at 3,700 of its drive-thru pharmacies,” he said in a statement.

These health visits all offer opportunities for drug stores to engage with consumers.

Like discount retailers, drug stores also are capitalizing on the demand for value via their store brands. According to Mintel research, 22 percent of consumers said they are buying more private-label products at drug stores during the pandemic, Mintel’s Smith says. Private label has been a focus area for drug stores and other channels even before the pandemic, she notes.

Furthermore, drug stores are using technology to reach consumers. Telehealth options allow consumers to connect virtually with a nurse or doctor, and improved mobile apps enable them to keep track of their health records and prescriptions in a convenient way, Mintel’s Smith says. CVS also has increased its use of text messaging to connect with shoppers and highlight products and current sales, she adds.

Many drug stores also are offering home delivery and curbside pickup, which is appealing to those trying to minimize time spent in stores. Mintel reports that 17 percent of shoppers are using such services at drug stores during the pandemic.

“Now that Amazon is selling [prescription medications], the impact of that could be quite disruptive, although it may not take effect until after COVID-19 is no longer a threat, as consumers are primarily focused on protecting themselves right now rather than changing their pharmacy,” Mintel’s Smith says. “Walmart’s entry into Medicare is also significant. Drug stores will pivot to form more partnerships, alliances (e.g., Rite Aid/Bartell Drugs) and offer more services (such as Walgreens’ entry into financial services) to stay competitive.”