Moët Hennessy USA announced the expansion of its digital offerings with Bottles and Bubbles, a new skill available on Amazon’s Alexa that gives consumers the opportunity to learn about Champagne and create their own experiences at home. The new Amazon Alexa skill leverages voice technology to help everyday consumers become Champagne connoisseurs, the company says. Through its tips and educational lessons, which includes recommended Champagne pairings and moments to celebrate, and how to pronounce Moët Hennessy USA Champagnes, Bottles and Bubbles is designed to create the ideal Champagne experience, it adds. By enabling the skill and saying “Alexa, open Bottles and Bubbles,” consumers can engage with six areas of conversational and educational content.

Demand for alcohol beverages remains steady, according to data from The BlueCart 2017 Hospitality Report, which culls data from a user community of more than 37,000 restaurants, bars and suppliers in 12 countries. For the third quarter of 2017, the Top 7 alcohol brands accounted for 4.15 percent of sales. A breakdown of those brands has Stella Artois at No. 1 with 44 percent of the sales among BlueCart’s client base, followed by Tito’s Handmade Vodka with 27 percent and Hennessy with 14 percent. Rounding out the Top 7 were Jameson Whiskey (10 percent) and Bud Light (3 percent), while Miller Light and Angry Orchard Hard Cider each captured 1 percent, respectively.

A café with local color 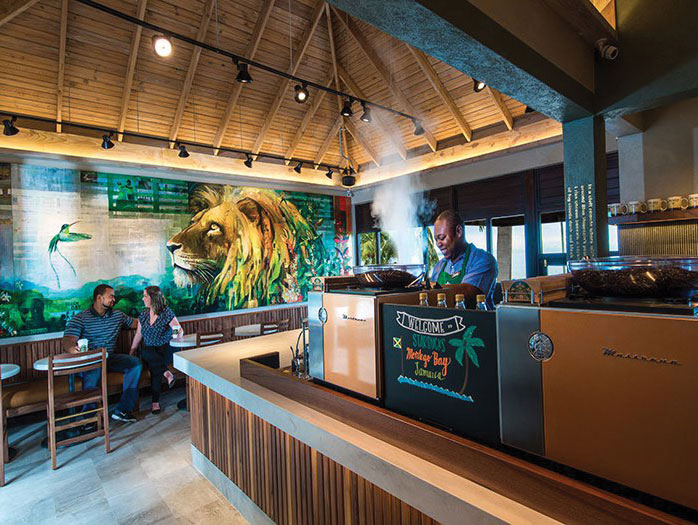 Starbucks made Jamaica its 76th international market with the opening of a new café at Doctor’s Cave Beach in Montego Bay, Jamaica.

Starbucks has made Jamaica its 76th international market with the opening of a 1,200-square-foot café at Doctor’s Cave Beach in Montego Bay. The shop features traditional Jamaican colors and design elements as well as custom pieces of artwork from local artist Fiona Godfrey. The store pays tribute to Jamaica’s people and rich coffee heritage, it says. The café features distinctly local design elements, including pickled wood, vaulted ceilings and louvered windows that have been preserved from their original state and enriched to create an authentic beachside café experience, the company says. Additionally, Godfrey’s mural of a lion draws from the colors of Jamaica: black, green, yellow and red. The opening of the store in Jamaica represents Starbucks’ 17th market in the Latin America and Caribbean region, with 15 locations in Jamaica set to open during the next five years, the company says. 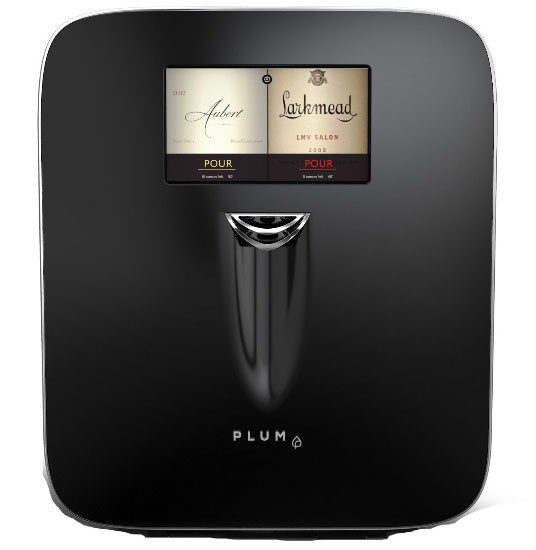 Plum is a new fully automatic wine device that preserves, chills and serves wine by the glass at the ideal serving temperature.

Enjoying wine from the bottle to the glass has gotten easier with Plum, a new, fully automatic wine device that preserves, chills and serves wine by the glass at the ideal serving temperature with the push of a button, the company says. Users place two unopened 750-ml bottles of wine with any closure inside the countertop appliance. Plum’s automated wine identification system then photographs each wine label and automatically recognizes the vintage, varietal, region and winery from a database of more than six million wines. Additionally, the serving temperature for each of the 220 commercially available wine varietals and blends is automatically set, while its integrated solid-state cooling system silently chills each bottle to the perfect serving temperature. Designed to pierce any closure, the motorized, patent-pending needle-in-a-needle design pressurizes each bottle of wine with argon gas, preventing oxygen from affecting the wine for as long as 90 days, it says.

A year after its U.S. launch, Havana Club Rum debuted a new integrated campaign: Forever Cuban. The campaign affirms that although the brand no longer is produced in Cuba, it is, and forever will be, Cuban, the company says. Launching on YouTube and the brand’s social media channels, Forever Cuban debuted with a 60-second spot featuring Cuban-American actor Raul Esparza reciting “Island Body,” a poem written for the campaign by poet Richard Blanco. Available in both English and Spanish, the spot culminates with the tag line: “Forced from home. Aged in exile. Forever Cuban.” The campaign sends the message to all exiles that regardless of where they live, they remain a part of their homeland, reassuring consumers who share similar stories of exile that there is nothing anyone can do to take away their identity, the company adds. Further conveying the brand’s story of exile, perseverance and resurgence, it also unveiled a new website, TheRealHavanaClub.com. 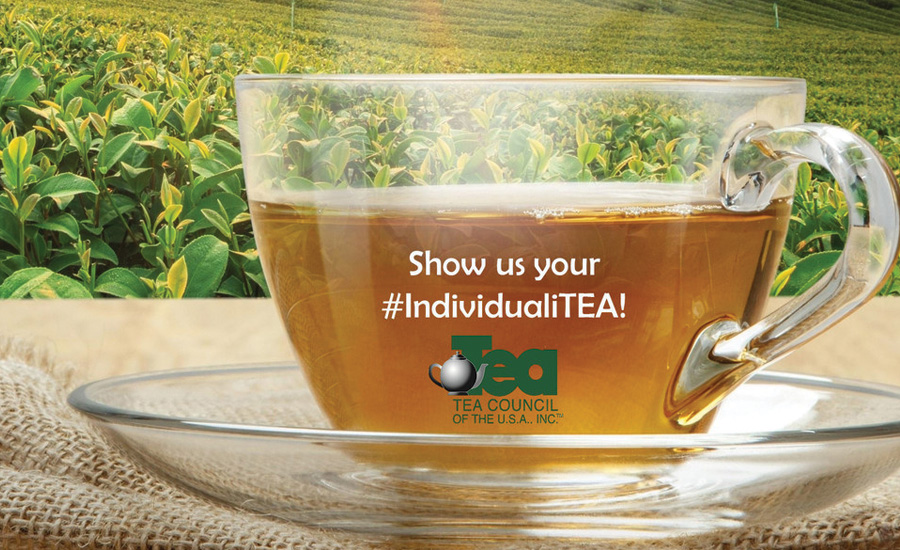 Every cup of tea has a story to tell, and last month, the Tea Council of the USA launched its second annual hashtag #IndividualiTEA Photo Sharing Sweepstakes to learn tea lovers’ stories. The council invited consumers to share a photo, video or description on Twitter with the hashtag #IndividualiTEA and tag @TeaCouncil for a chance to win $500 and a year’s supply of tea. The sweepstakes was a part of its celebration of America’s third annual National Hot Tea Day on Jan. 12. The winner of the sweepstakes will be featured on the council’s social media channels.

Out of this world 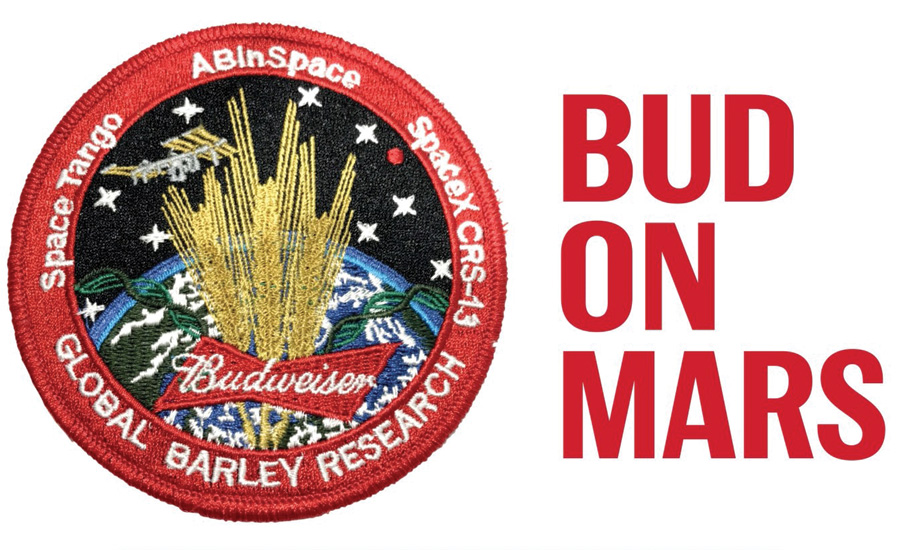 Upholding its commitment to being the first beer on Mars, Budweiser sent barley — one of its key ingredients — to the International Space Station (ISS) last month. The goal of the launch was to better understand how beer ingredients react in microgravity environments, so that when humans go to Mars, Budweiser will be there, the company says. Budweiser partnered with CASIS, which manages the ISS U.S. Laboratory, and Space Tango, a payload development company that operates two research facilities within the National Lab. Along with Budweiser’s innovation team, the group initiated two barley experiments— one focused on barley seed exposure and the other focused on barley germination. The barley was in orbit for about one month before it was sent back to Earth to be further analyzed.

Red Bull Crashed Ice is returning to Saint Paul, Minn., on Jan. 19 and 20 to kick-off the 2017/2018 Ice Cross Downhill Championship. For the seventh year, the event is returning to the Cathedral of Saint Paul, which is the first leg of the four-event world series. New this year, in addition to free general admission, consumers can purchase premium-viewing tickets at redbull.com/crashedice. Four skaters will compete down a 1,600-foot track, and the first two male and female competitors, respectively, to cross the finish line will advance to the next round until a champion is crowned, the company says. The Ice Cross Downhill World Championship will feature nine stages in its 2017/2018 season, including four major Red Bull Crashed Ice races and five Riders Cup races. The Red Bull Crashed Ice World Championship will be available live and on-demand on Red Bull TV, it adds.