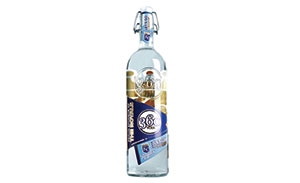 360 Vodka, a brand of Earth Friendly Distilling Co., released a limited-edition, commemorative Kansas City Royals bottle just in time for the 2015 baseball season. The commemorative bottle features the Royals colors, a Royals flag proclaiming the team as the 2014 American League champions, and another banner touting 360 Vodka as a “proud sponsor” of the team. The neck of the bottle includes an additional label cheering for the home team with the team logo.

360 Vodka crafted the com-memorative Royals bottle using locally sustainable materials and a reusable swing-top closure. For each closure returned to the distillery, 360 Vodka will make a donation to Royals Charities. This limited-edition, commemorative bottle was introduced at retailers in Missouri, Kansas, Iowa and Nebraska throughout March for a suggested retail price of $12.99 for a 750-ml bottle and $19.99 for a 1.75-liter bottle.