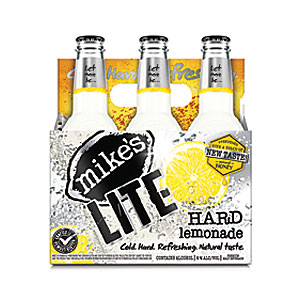 In an effort to meet the needs of consumers wanting gluten-free alcohol beverages, Mike’s Hard Lemonade Co. worked with the Alcohol and Tobacco Tax and Trade Bureau (TTB) to create and secure an exclusive “Crafted to Remove Gluten” seal for its flavored malt beverages. The seal was created to educate and inform consumers about Mike’s Hard Lemonade’s dedication to quality and natural ingredients and its proprietary filtration process, the company says. This filtration process, which creates the product’s neutral malt base, also removes gluten. All Mike’s products are tested and approved by an independent agency to confirm that gluten has been removed to less than 5 parts per million, as measured by the R5 Competitive Elisa test, which is recognized as the industry standard for gluten testing, the company says. The “Crafted to Remove Gluten” seal is the first of its kind for a fermented malt beverage made from a gluten-containing grain and follows a ruling by the TTB that enables manufacturers to highlight products that are crafted to remove gluten, as long as a disclaimer is provided stating that the products may contain trace amounts, it adds.