To help cheer on the Pittsburgh Pirates this season, Pittsburgh Brewing Co. added its third and final Collector Series Beer Can: “Raise the Jolly Roger.” The “Raise 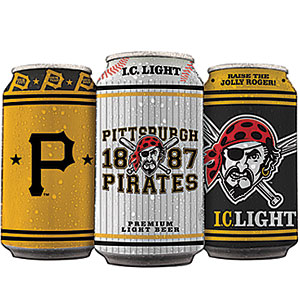 the Jolly Roger” I.C. Light can is sold alongside “Vintage P” and “Heritage 1887” I.C. Light cans to complete the beer can collection. The Pirates-themed cans are available throughout the season in 12-, 24- and 30-packs. Earlier this summer and as part of the can promotion, Pittsburgh Brewing launched its 95 Days of Summer campaign, which features codes on each of its 30-packs of Pirates-branded cans, giving consumers the chance to win 95 prizes in 95 days through Aug. 21. Prizes include getaways to Seven Springs Mountain Resort; a bus trip to Washington, D.C., to watch the Pirates play the Washington Nationals; Pittsburgh Pirates Prize Packs; and more.