Red Bull is giving its fans the gift of flight through its new limited-edition Red Bull Flugtag four-pack. The special packaging commemorates the first-ever National 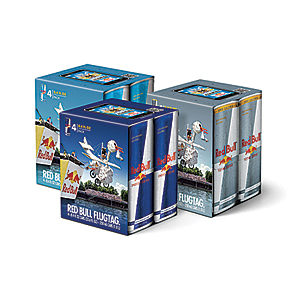 Flugtag Day on Sept. 21, in which participants in Chicago; Dallas/Fort Worth, Texas; Long Beach, Calif.; Miami; and Washington, D.C., will participate in a homemade, human-powered flying machine competition. Each pack features a text-in and quick-response code linking to the Red Bull Flugtag mobile game that will make one creative, aspiring aviator a real-life Red Bull Flugtag pilot. The grand-prize winner from the game, who was chosen at the end of August, will be sent to the National Red Bull Flugtag event in Dallas/Fort Worth where the flying machine he or she designed in the game will be assembled and awaiting its first flight.