Up Close With: Pulse Beverage Corp.

Although more consumers are doing their best to trade sugary beverages for healthier options, one thing they’re not willing to sacrifice is taste, says Bob Yates, 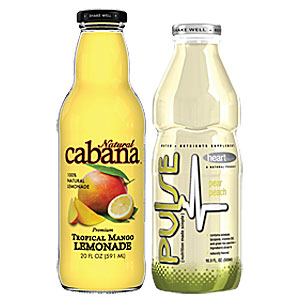 president and chief executive officer for Pulse Beverage Corp., Denver. Therefore, when the company developed its Cabana line of low-calorie lemonades and Pulse line of functional beverages, it was determined to focus on both health and taste.

Available in Lemonade, Tropical Mango Lemonade, Cherry Lemonade, Blueberry Lemonade, Strawberry Lemonade and Island Spice varieties, Cabana drinks are sweetened with a blend of cane sugar and stevia for an all-natural, low-calorie positioning. Each flavor contains approximately 60 calories in an 8-ounce serving, Yates says. The brand launched in November 2011 and landed in the No. 10 spot on Chicago-based Information Resources Inc.’s (IRI) list of the top single-serve bottled lemonades for the 52 weeks ending May 19, 2013, in U.S. supermarkets, drug stores, mass market retailers, military commissaries, and select club and dollar retail chains. Dollar sales for the brand were up 617 percent during that time frame compared with the prior-year period, reaching nearly $2.6 million and more than 1.5 million in unit sales, according to IRI data.

Currently, Cabana lemonades are available in 47 U.S. states, Canada, Bermuda and Panama, Yates says. The company also recently signed an agreement with a distributor in Mexico, which will make the line available throughout the country, he adds. Considering the growth that the brand is seeing, Yates expects the Cabana line to sell more than 5 million cases a year within a five-year time frame.

But the company isn’t putting all of its lemons in one basket, per se. Earlier this year, it launched a line of Pulse functional beverages, which were originally formulated under license by Baxter Healthcare Corp., Deerfield, Ill. The line features three varieties — Heart Health Formula, Men’s Health Formula and Women’s Health Formula — which were each formulated to be scientifically effective by containing ingredients that are widely considered to be critical to adult health, the company says. The ingredients are delivered to consumers by using liposome nanotechnology that allows the body to more effectively absorb the vitamins, it adds.

“What Baxter was able to do was come up with a process to basically smash the vitamins into thousands of little particles and bathe them in a liposome,” Yates explains. “The body digests it more slowly because it has to break through the liposome sphere and, subsequently, you have more time for the body to absorb it. It’s a process of slowing down the digestive process, and we were very interested in that technology and had the good fortune of being able to acquire those formulation rights from Baxter.”

However, after launching the line in February, the company discovered that during the bottling process, the vitamins and nutrients in the liquid were degrading more quickly than expected due to heat and oxygen during batching and filling, he says.

“We found that we were getting just a little more dissipation in it, so when we sent it out for testing … we weren’t 100 percent satisfied with the results on it, so we took that whole run and we just tested that run and retested it and did more aging studies on it,” Yates explains. “…We had to add a certain percentage of more [vitamins and nutrients] to end up with the percentage that we had on the bottle.”

In addition to delivering an effective amount of vitamins and nutrients in each beverage, Pulse was challenged with maintaining a delicious flavor profile, which often can be difficult when working with functional ingredients, Yates says.

“With all the vitamins and nutrients in a product, the more that you put into it that’s beneficial, sometimes the harder it is to get it to taste good,” he says. The product’s authentic flavor profile and blend of cane sugar and stevia for sweetness both aid in an overall good taste, Yates suggests.

“The main goal [with Pulse] is to get the vitamins and the nutrients and the liposomes to the people in a product that tastes good but leads people to a healthier lifestyle,” Yates says.

Although functional, better-for-you products are popular in the United States, China also has shown interest in the Pulse line, he adds. The company currently is in talks to distribute the Pulse line throughout the country, he says.

In the future, the company’s Pulse Heart Health Formula might include coenzyme Q10 as it currently is in testing, he adds.

“What we’re trying to do is every time we can improve the beverage, we look for ways to improve it,” Yates says. “We’re always going to be looking to make the product better.”

Up Close With: Brain-Twist Inc.

Up Close With: Multi-Flow Industries