Up Close With: Brain-Twist Inc.

According to New York-based market research firm Nielsen, alcohol drinks packaged in a pouch — many of which are marketed as frozen cocktails — approached $200 million in annual sales in measured channels through Aug. 18, 2012. After a discussion with a Walmart buyer denoting the popularity of these alcohol slushy drinks in its stores, New York-based Brain-Twist Inc. decided it was time to bring the slushy format to the energy drink category. 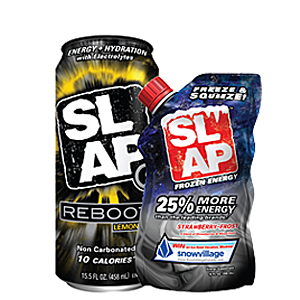 “[Walmart was] having great success with that and [the buyer] kind of challenged us saying, ‘Wouldn’t it be cool if we could take a non-alcoholic product and put it into a ready-to-drink frozen product?’ And that’s really all we needed was the challenge,” says Larry Trachtenbroit, chief executive officer of Brain-Twist Inc.

In April, the company launched Slap Frozen Energy, a line of energy drinks that morph into a slushy-type beverage when placed in the freezer for a few minutes. The new line is profitable, but Trachtenbroit expects it to hit its stride in 2013.

But before there were frozen energy pouches, Brain-Twist launched Slap Energy in cans. Like Slap Frozen Energy slushies, Slap Energy drinks feature 25 percent more energy than the leading brands based on caffeine, Trachtenbroit says. The amount of caffeine in its products is very important because, in the energy drink category, the function of the product is measurable and expected by consumers.

“It’s important to deliver on the promise of the category,” he says.

In the last two years, the company has increased its focus on two strategic partners: Walmart and Casey’s General Stores. Slap Energy in cans is positioned at the retailers’ opening price point, Trachtenbroit says. He also points out that although the energy drink category is an $8 billion segment, it still has relatively low household penetration even as it continues to grow year after year.

The Slap Energy can line is available in Crisp Apple, Frost and low-calorie Frost varieties. Most recently, the company launched a low-calorie lemonade flavor in Casey’s General Stores called Slap Reboot Lemonade. The new variety contains 10 calories and blends energy and electrolytes for a multi-functional product.

“It wasn’t nearly as easy as you would think it would be, because one of the things we have to worry about is … the formulation, because if you took a traditional energy drink and put it in the freezer, it would freeze like a rock and rupture the can,” he explains. “So we had to go with the alternative packaging; we had to go with a formulation that had the right amount of solids that would allow it to turn into a slurpie state or a slushy state within four minutes.”

After a lot of effort in formulating and packaging the product, the company “hit its groove” at

the end of the summer and is positioned with co-packers and sufficient capacity for a great 2013, Trachtenbroit says.

But before the end of this year, the company kicked off an in-store promotion to increase consumer trial. In October and November, when consumers purchased any energy drink at Casey’s General Stores, they could get a Slap Frozen Energy slushy for $0.25. This promotion was designed to get consumers familiar with Slap Frozen Energy, because the energy drink category is dominated by large brands, and consumers don’t think to check the freezer section for energy drinks, Trachtenbroit says. Slap Frozen Energy isn’t exclusively located in the freezer section, though. The product can be sold at room temperature in the energy drink aisle or frozen in the freezer section, depending on the store and the space, he says. This provides flexibility for the distributor when transporting the product because it does not need to be kept cold, and it gives the retailer flexibility when it comes to product placement, he adds.

In such a competitive and growing category, an innovative product like Slap Frozen Energy has the ability to expand the energy drink category while making use of more available space in other areas of the store, Trachtenbroit says.

Slap Energy drinks and Slap Frozen Energy slushies are available in all Walmart and Casey’s General Stores locations as well as in select 7-Eleven stores. BI