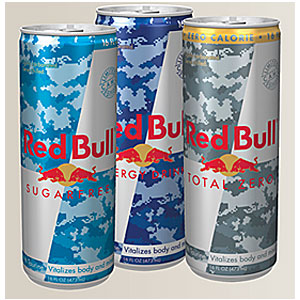 surrounding U.S. military bases. A portion of the proceeds from these Red Bull Camo Cans will benefit the Military Warriors Support Foundation and their Homes4WoundedHeroes program. “Military members around the world rely on Red Bull to get them through long shifts or to aid their focus in extreme situations, so it’s nice to see the Camo Can as a tribute to the dedication of our troops,” said retired three-star General Leroy Sisco, founder and chief executive officer of the Military Warriors Support Foundation, in a statement. The Red Bull Camo Can will be sold as a single 16-ounce can available in Red Bull Energy Drink, Red Bull Sugarfree and Red Bull Total Zero varieties through Labor Day.