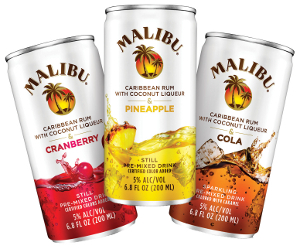 Pernod Ricard USA, a subsidiary of Pernod Ricard SA, released a line of single-serve, ready-to-drink cocktails in cans. With 5 percent alcohol by volume, each offering mixes Malibu Caribbean rum with coconut liqueur and either cranberry, pineapple or sparkling cola flavors. A 200-ml can has a suggested retail price of $2.49, and a four-pack retails for approximately $9.99. Additionally, the company added Malibu Blue Hawaiian and Malibu Piña Colada Light to its line of 1.75-liter cocktail pouches. Malibu Piña Colada Light will contain 75 calories in each 1.5-ounce serving. The entire line now features pouches made with stronger materials, including an additional pouch layer inside of the external pouch, keeping the liquid cooler for longer, the company says. Plus, a new spout with a reinforced safety latch will reduce leaks and spills, it adds.