This website requires certain cookies to work and uses other cookies to help you have the best experience. By visiting this website, certain cookies have already been set, which you may delete and block. By closing this message or continuing to use our site, you agree to the use of cookies. Visit our updated privacy and cookie policy to learn more.
Home » Sports and protein drinks adapt to the market alongside functional beverages
Sports Drinks
Category Focus

Having won multiple world championships, Mexican professional boxer Canelo Álvarez is a counterpuncher known for being able to exploit openings in his opponents’ guards while avoiding punches with head and body movement. Álvarez, when looking to claim the Super Welterweight title in 2016, said: “I’m a strong fighter, I’m a fighter who can adapt to my surroundings.” Similarly, as the sports and protein drinks category contend with the new age beverage marketplace, experts note that it has adapted to the market alongside functional and hybrid beverages.

“Performance of sports and protein drinks are super strong,” says Sally Lyons Wyatt, executive vice president at Information Resources Inc. (IRI), Chicago. “From an omnichannel perspective, we have seen double-digit growth in dollars and in units. Both online and in-store are contributing to the growth.

“When COVID-19 hit, and we were at home more with gyms closed, we saw sports and protein drinks decline in sales. However, [the category] quickly rebounded as mobility picked up and people began to work out more,” Wyatt continues. ”In addition, hybrid working models have fueled growth of these drinks.” 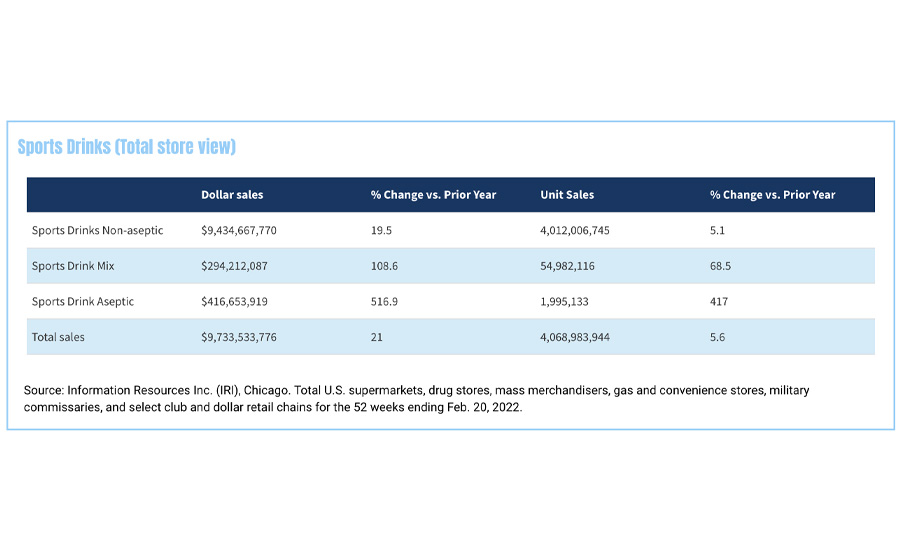 As the more traditional sports and protein drinks remained popular among individuals active in sports and weightlifting, “new hybrid beverages, such as ready-to-drink caffeinated protein drinks, and other health-toting concoctions, have debuted over the past several years and garnered a significant level of attention,” Hiner explains.

Whereas the category was essentially a two-player market for a long time, “it has definitely had to reinvent itself in this blurred beverage marketplace,” IRI’s Wyatt adds.

“Sports and protein drinks have contributed more than its fair share to the [liquid refreshment beverage] (LRB) dollar growth. This growth has purely come from low/no-calorie options and innovations,” Wyatt explains. “They do have high interaction indices with flavored still water brands.

“The post- and during- workout is a key occasion for a lot of functional waters and these low-calorie sports drink options serve as a good substitute for those occasions, thereby stealing share from some functional beverages,” she continues.

Expanding the options for low-calorie sports drinks, BODYARMOR, a brand of The Coca-Cola Co., Atlanta, recently introduced its newest flavor innovation: BODYARMOR LYTE Kiwi Strawberry. Each 16-ounce bottle of Kiwi Strawberry has only 20 calories, and is packed with potassium-based electrolytes, coconut water, antioxidants and vitamins, the company says.

“We are excited to launch this fresh, new flavor for everyone to enjoy,” said Ben Jones, CEO of NOCCO, in a statement. “Since we launched, it has been our goal to provide healthy drinks with fresh and delectable flavors to keep you going. With this new Blood Orange flavor, you will be energized and ready for what the day has to offer.”

According to the report, the global sports drink market size was valued at approximately $24 billion in 2021 and is likely to reach an estimated $32 billion by 2027, garnering a compound annual growth rate (CAGR) of above 4% during the forecast period 2022-2027.

“In the developed markets, drinks are never again seen as a brisk refreshment,” the report states. ”They have become progressively helpful supplements and food supplement items. The purchaser sections driving the development of the market incorporate maturing buyers searching for essentials, 20- to 30-year-olds eager to attempt new items with well-being benefits, and occupied buyers looking for ‘snappy wellbeing.’

“In 2018, the North America sports drinks market held the largest share of about 40% in terms of revenue,” it continues. “The growth in this regional market is owing to the growing trend of athleticism and rising concerns over health. The recent changes in consumer lifestyle have resulted in the need for a healthy diet, which is likely to augment the business growth in this area.”

As the blurring of LRBs continue, the sports drink industry will be pressured to differentiate benefits in order to capitalize on its current growth trajectory, IRI’s Wyatt notes.

“These benefits include expansion of the health and wellness benefits, as well as ensuring broad distribution across brick-and-mortar channels and online so the products are available for consumer’s hybrid ways of working,” she says. “In addition, flavor innovation will be important especially for their brand loyal[ist]s. They should also continue to utilize social and digital media to help influence consumers by touting their benefits in an engaging way.” 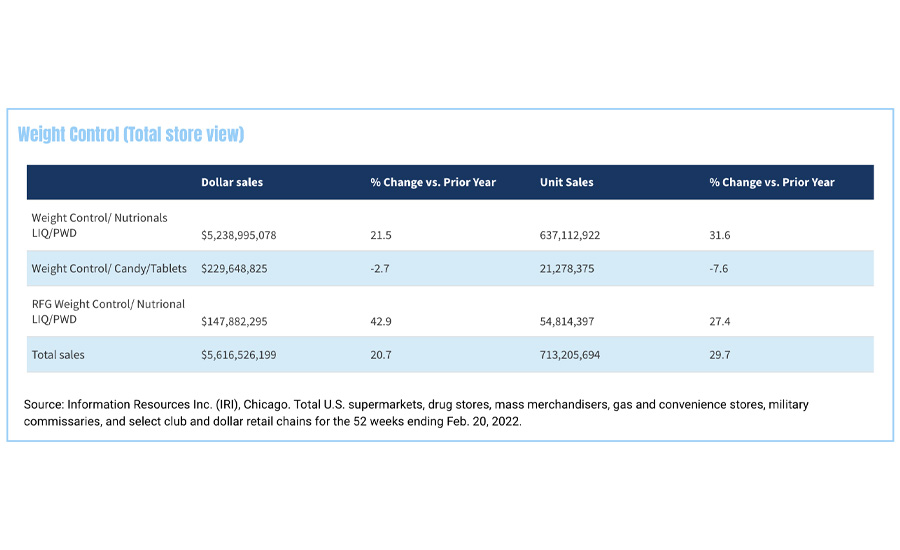 In March, Super Bowl-winning quarterback Russell Wilson and NFT expert, entrepreneur and digital guru AJ Vaynerchuk, announced their partnership with H+S Labs to launch Local Weather, a nootropic-focused hydration beverage. Working closely with H+S Labs, Wilson and Vaynerchuk developed Local Weather to be the perfect balance of what the mind and body need to operate at peak performance, the company says. Some of Local Weather’s all natural and organic ingredients include coconut water for base hydration, pink Himalayan salt for electrolytes and nootropics such as ashwagandha, L-Theanine and L-Tyrosine to support mental stamina, focus and performance, it adds. Local Weather launched in four flavors: Fruit Punch, Orange Clementine, Mango Passionfruit and Wildberry.

“Throughout my career I’ve found that the high-sugar and artificial sports drinks we all know prevent me from achieving my best,” Wilson said in a statement. “As a professional athlete and father, I truly believe we owe it to the next generation to provide a better option that suits their performance needs and speaks to their creative pursuits. It’s time to start a new conversation and change the dialogue around sports hydration forever.”

Experts note that as natural and organic ingredients have increased in the beverage space, a variety of health and wellness benefits continue to emerge within the sports and protein drinks category.

While natural and organic products have been around for a while, plant-based ingredients are expected to drive growth for the industry moving forward, IBISWorld’s Hiner says.

“The biggest emerging trend for protein drinks, in particular, is the growing popularity of plant-based beverages,” she explains. “This comes alongside a wider trend toward plant-based diets and the expansion of plant-based foods.”

Moreover, as natural and organic ingredients have increased, sports and protein drink producers “have either incorporated these ingredients directly into their own beverages, launched new product lines aimed specifically at this demographic, or acquired pre-existing players within the industry to earn an early stake within the rapidly growing market,” she explains.

“As with the broader beverage industry, functional beverages are expected to continue to expand, with consumers opting for sports and protein drinks with the most added benefits,” she concludes.

Lauren Sabetta, associate editor for Beverage Industry, writes for the magazine’s print and online components. She earned her Bachelor of Science in Communication, Journalism from Appalachian State University.

2019 State of the Beverage Industry: Sports drinks with protein and organic content in demand