With the new year in full swing, the National Bioengineered Food Disclosure Standard (NBFDS) went into effect in 2022. The mandate requires manufacturers and importers in the food and beverage industry to label products containing genetically modified organisms (GMOs) using the term “bioengineered” instead of “GMO” in disclosures. However, there is an exemption for those generating less than $2.5 million in annual sales. The regulation also allows a 5% ingredient threshold for GMO contamination.

Along with the United States, many countries require genetically modified foods to be labeled. The NBFDS, which was published in the Federal Register in December 2018, marked the start of mandatory GMO labeling in the United States.

According to the Bellingham, Wash.-based Non-GMO Project, GMOs are living organisms whose genetic material has been artificially manipulated in a laboratory through genetic engineering. This creates combinations of plant, animal, bacteria, and virus genes that do not occur in nature or through traditional crossbreeding methods. 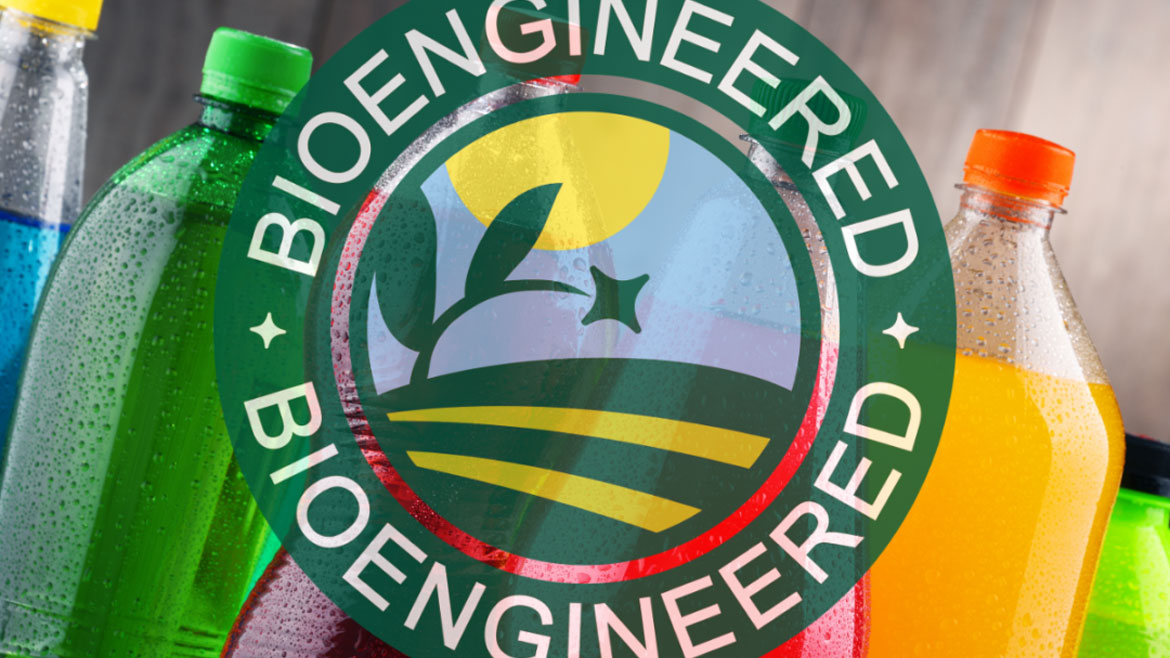 The National Bioengineered Food Disclosure Standard applies to most food manufacturers and importers in the United States. There currently is an exemption for those generating less than $2.5 million in annual sales.
Image courtesy of MONTICELLLLO, Adobe stock

A consumer poll taken in 2015 found that 93% of Americans and 88% of Canadians support labeling of GMOs.

The National List of Allowed and Prohibited Substances, which identifies synthetic substances that may be used and the non-synthetic substances that may not be used in organic crop and livestock production, includes some high-risk food ingredients made from crops commonly grown with GMO technology. This includes derivatives and carriers often used in beverage formulations, such as starch, protein, fiber and lecithin.

Experts point out that non-GMO is not the same thing as organic. Yet, all organic products are non-GMO. Vegan/plant-based/vegetarian products also exclude GMOs. Thus, non-GMO labeling is attractive to marketers who cannot produce organic foods and beverages for any number of reasons, including supply and cost, but want to appeal to shoppers looking for “cleaner” formulations.

Experts note that the simpler the ingredients, the easier it is to communicate this fact on beverage labels. For example, sodas sweetened with cane sugar and almond milks flavored by nature do not contain GMOs.

Honey is an example of a “threshold” ingredient. In its natural state, honey is a non-GMO food because honeybees are not genetically modified; however, honey is produced from the nectar of plants. The pollen grains within honey are a component in which genetically modified proteins might be found. However, the amount of pollen in honey averages 0.2%, which is well below the allowed threshold set forth in the NBFDS as well as by The Non-GMO Project, the groups state.

If one or more ingredients in a formulation are being touted as being from non-genetically modified crops, it is paramount that the verbiage not be misleading. Thus, beverage manufacturers should do their homework and work closely with suppliers if they want to develop products that make a non-GMO claim.

Getting products analyzed and certified by a high-quality and reputable food lab are steps to take to ensure the highest efficacy — and the Butterfly seal tells consumers you have done your due diligence, according to The Non-GMO Project.