Perks, experience will be key to recovering from slow-downs

The COVID-19 pandemic has impacted every industry; however, as all grapple with its effects, the foodservice industry is perhaps one of the hardest hit. According to Washington, D.C.-based The National Restaurant Association’s (NRA) “2020 State of the Restaurant Industry Report” released in late February, the restaurant industry was projected to amass sales of $899 billion for 2020, a 4 percent growth rate. However, this likely has changed in wake of the pandemic.

Although many restaurants have permission to offer carry-out and curbside sales of beverages, including alcohol, this hasn’t necessarily been a boon for these venues.

Jill Failla, foodservice analyst at Chicago-based Mintel notes that, in terms of beverages, alcohol sales are up at home, even more-so as many states have legally approved wine, beer and prepared cocktails for curbside pickup with as long as food also is purchased.

“Beverage business is hurting overall and will for some time as a result of COVID-19,” Failla says. “However, there’s an enhanced opportunity for health-focused functional beverages, such as immunity-boosting smoothies and juices as a result of this.”

Yet, beverage offerings alone is not enough for the average consumer. According to “2020 State of the Restaurant Industry Report,” 63 percent of consumers would rather spend on an experience than an item. This means that although pick-up orders might keep an on-premise establishment alive — without offering “experience,” it could be difficult for an establishment to thrive, according to New York-based Nielsen CGA. Yet, in the two weeks ending April 11, take-out/delivery orders that included alcohol increased 9 percent, the market research firm states. 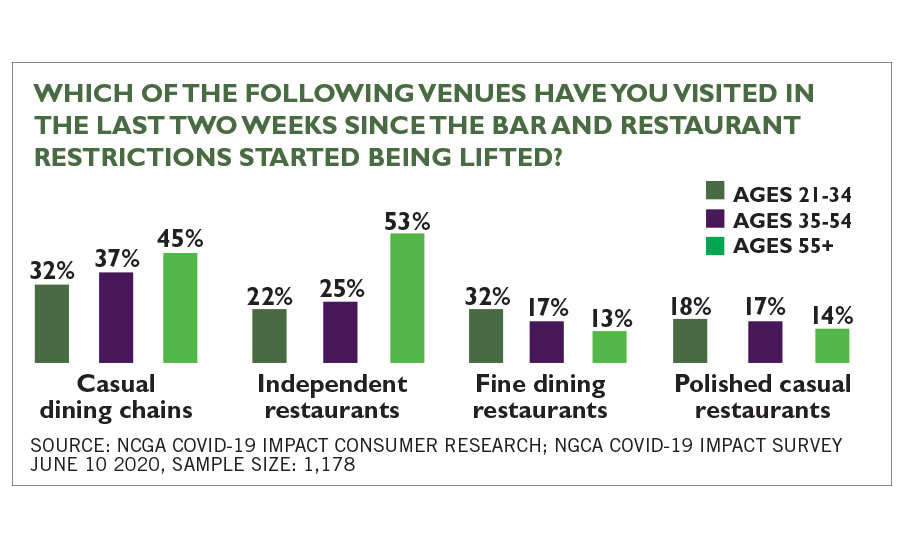 Click image for larger version
According to Nielsen CGA, in the two weeks ending April 11, take-out/delivery orders that included alcohol increased 9 percent. As many states have granted permission for curbside alcoholic beverage orders, businesses are latching on as a way to bring in business. (Image courtesy of Charles Deluvio)

Beyond full-service, which has been severely impacted by COVID-19 and will be for some time, Mintel’s Failla notes smaller foodservice segments also have been hit hard.

“Daytime dayparts, including breakfast and lunch establishments, are hurting and will likely continue to hurt as consumers increasingly work from home,” she says. “This affects coffee/tea shops, bakery cafes and fast-casual concepts in particular — any type of restaurant popular in business districts or on weekday commutes.”

In its May “Foodservice in the Spotlight During Coronavirus Pandemic,” Chicago-based Euromonitor International stated  that 20-40 percent of independent full-service restaurants could permanently shut down in some of the hardest-hit markets.

Despite this, at the end of April, Nielsen CGA reported that on-premise trade as a whole had begun to adapt to the market conditions. For those U.S. establishments still operating, dollar sales velocity was up 42 percent for the week ending April 25 versus the week ending March 28, and the average number of checks at Nielsen CGA-measured outlets was up 69 percent for the same time period.

What consumers are thinking

In the midst of a slow comeback, 53 percent of consumers surveyed by Nielsen said they planned to eat on-premise and 50 percent planned to drink while out, either at the same rate as they did before or even more often than they did pre-COVID-19, showing promise for rebounding on-premise habits.

Nielsen’s May 22-26 survey of 1,300 consumers reports that 40 percent of consumers would be returning to casual dining chains, followed by 35 percent planning to visit independent restaurants. In addition, Nielsen’s survey notes that 34 percent of respondents had visited the on-premise space three or more times in the past two weeks, and that 42 percent went out for drinks with food, while 32 percent sought just “relaxed/quiet drinks,” a nod to the beverage segment.

When it comes to the nearing horizon where restaurants reopen for business, Failla notes several important considerations for establishments as they proceed with their “not-so-usual” business.

“Restaurants will need to continue to be immensely innovative in order to overcome the hurdles presented to them by COVID-19 and the resulting recession,” she explains. “Struggling restaurants will need to lean into their loyal customer base to recover sales, which may mean offering loyal customers prime-time dinner seating, skip-the-line benefits or other special deals.”

Failla notes that more restaurants also may see success with a subscription program, which could appeal not only to budget-seekers, but also to Gen Z (those born in the mid-to-late 1990s into the early 2010s) in particular.

“Panera Bread rolled out a coffee subscription program this year, and KFC did one for its chicken wings last fall,” she explains.

In the long-term, Failla notes that restaurants may need to lean on technology for a leg-up on this climb back to “normal.”

“Digital engagement will be more important than ever before for making restaurants top-of-mind, and personalized,” she concludes. “[Foodservice establishments] delivering attuned messaging around customers’ favorite menu items, and more, will see the best results as they get back into business.”