The 1979 “The Muppet Movie” starring Kermit the Frog, Miss Piggy and Fozzie Bear, opens as the beloved amphibian, strumming his ukulele in the swamp, poignantly sings “The Rainbow Connection,” reminding us that, “Rainbows are visions, they're only illusions and rainbows have nothing to hide.” Another category with “nothing to hide” is the tea category because it truly has a “rainbow of options” in terms of varietal and format.

Despite the fact that tea market sales have remained relatively flat, there have been small pockets of growth in the $6.1 billion ready-to-drink (RTD) tea category, which saw a compound annual growth rate (CAGR) of 2.2 percent from 2013-2018, according to Los Angeles-based IBISWorld’s December 2018 report titled “RTD Tea Production in the US.” The industry continues to attract new consumers, thanks to the growing variety of flavors, strengths and sweeteners offered by manufacturers. Fast-growing niche products such as kombucha and mate also are attracting new industry entrants, the report adds.

Driving the category, refrigerated RTD teas generated dollar sales of $1.7 billion in U.S. multi-outlets and convenience stores for the 52 weeks ending March 22, a 6.1 percent increase over the prior-year period, according to data from Information Resources Inc. (IRI), Chicago.

Based on IRI data for the same timeframe, private-label refrigerated teas, comprising 15.7 percent of market share, was No. 1 with sales of $267 million, a 4.8 percentage point increase over a year ago. Rounding out the Top 5, respectively, are Gold Peak, a brand of the Atlanta-based The Coca-Cola Co., with sales of $216 million and a 4.8 percent year-over-year increase; Milos, a brand of Milos Tea Co., Bessemer, Ala., whose sales of 20-ounce, ½- and 1-gallon multi-serve cartons increased 19.5 percent to $192 million; Red Diamond, a brand of Moody, Ala.-based Red Diamond Coffee & Tea, notched sales of $136 million, a 2.5 percent increase; and Conestoga, Pa.-based Turkey Hill generated sales of $114 million, a 0.2 percent increase. 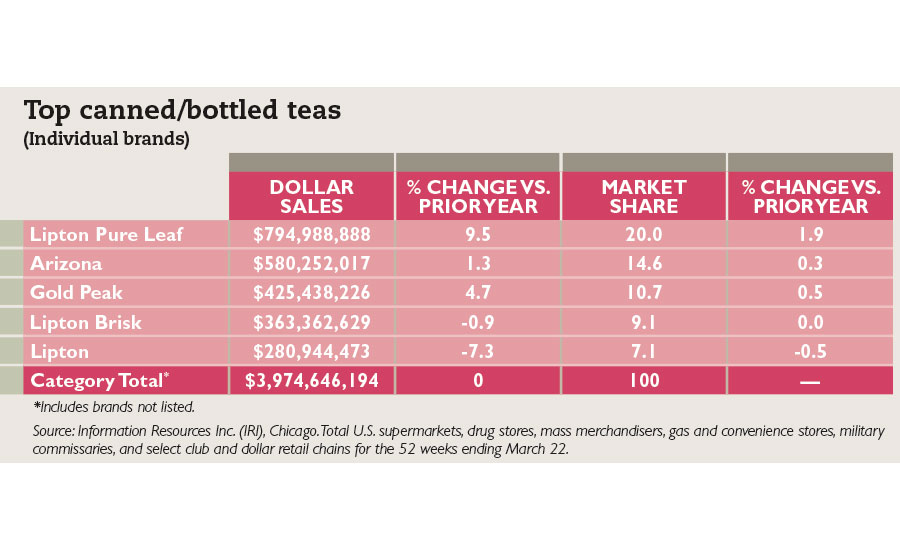 While canned and bottled teas were the largest growth driver, amassing $3.9 billion in sales, the sub-segment saw a slight contraction of 0.6 percent over a year ago, IRI data reports. Tea bags and loose-leaf tea had sales of more than $1.2 billion, a 3.5 percent increase over the prior-year period. And while Lipton tea was No. 1 in the sub-segment with nearly $218 million in sales, it contracted 1.9 percent, while No. 2 Bigelow saw growth of 10.4 percent and sales of nearly $189 million. Tea mixes notched $253 million in sales, with a 1.9 percent increase over a year ago.

Surging in marketplace recognition was Teavana, a brand of Seattle-based Starbucks Corp. The line of hot tea sachets and loose-leaf herbal infusions saw a double-digit climb of 79.3 percent and sales of $14.8 million in multi-outlets and convenience stores for the 52 weeks ending March 22, IRI data states.

While retail sales of U.S. teas are slightly up, Roger Dilworth, senior analyst at New York-based Beverage Marketing Corporation (BMC), notes a slight decline in the overall tea market. “The overall U.S. tea market declined by 1.9 percent in volume, with all segments — RTD tea, tea bags, iced tea mixes, loose tea and tea pods — declining,” Dilworth says. “Overall retail sales of U.S. tea grew by 0.8 percent. The decline in volume had much to do with RTD tea, which usually provides a lift to the U.S tea category. In general, tea bags have been fairly stagnant, while loose-leaf has performed a little better off a much smaller base.”

In its December 2019 “Tea in the US” report, Chicago-based Euromonitor International reports that the organic segment is “alive and well within hot tea,” with that segment seeing some of the highest growth.

Yet, the report notes that competition for standard tea is mounting. “Black tea bags have a lot of competition to reckon with in the evolving beverages market. This competition is coming from the fruit/herbal tea category and from the organic segment,” the report states. 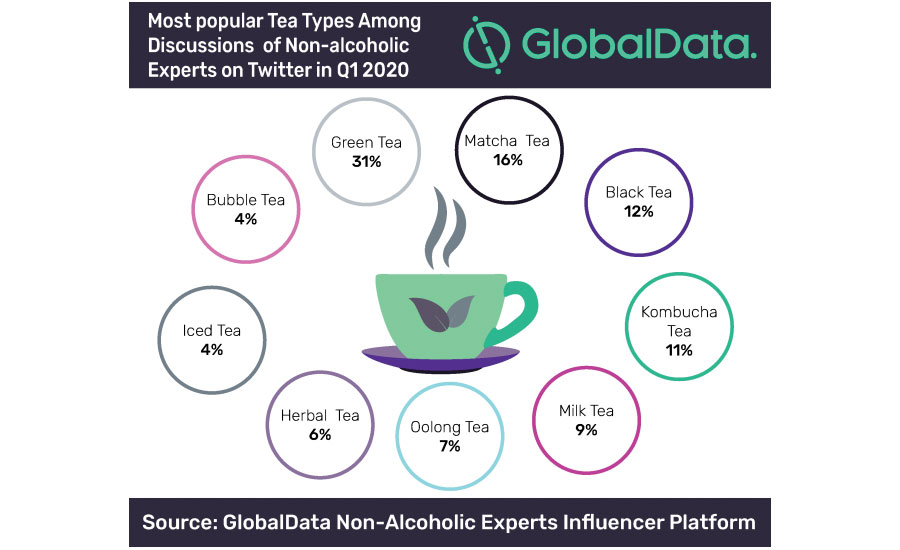 In a statement, Namrata Sain, consumer insights analyst at GlobalData, said, “Epigallocatechin gallate (EGCG), the powerful antioxidant present in green tea, has become a key driver of innovation and change in the on-trade tea market.”

Data from New York-based Nielsen also points to the upward trajectory of RTD green tea with dollar sales of $18.6 million for the 52 weeks ending April 25, up 72.7 percent from $10.8 million a year ago. For the same timeframe, liquid tea and RTD tea generated sales of $3.1 billion and $116 million, respectively, an increase of 3.4 percent and 15.9 percent, respectively. RTD iced tea had sales of $28.5 million, a 1.2 percent increase.

Several of the big tea companies are releasing new products to quench consumers’ thirst for tea. In January, Simply Tea, a brand of The Coca-Cola Co., debuted in three flavors: Simply Tea with Lemon, with Raspberry and with Peach. Packaged in 11.5-ounce transparent bottles, Simply Tea is made from not-from-concentrate juice, without any added preservatives, colors or flavors and contains 70 calories per bottle. In March, the company’s Peace Tea lineup added Hello Mango and Razzleberry Zer-OH to its iced tea portfolio in both 16- and 23-ounce cans. 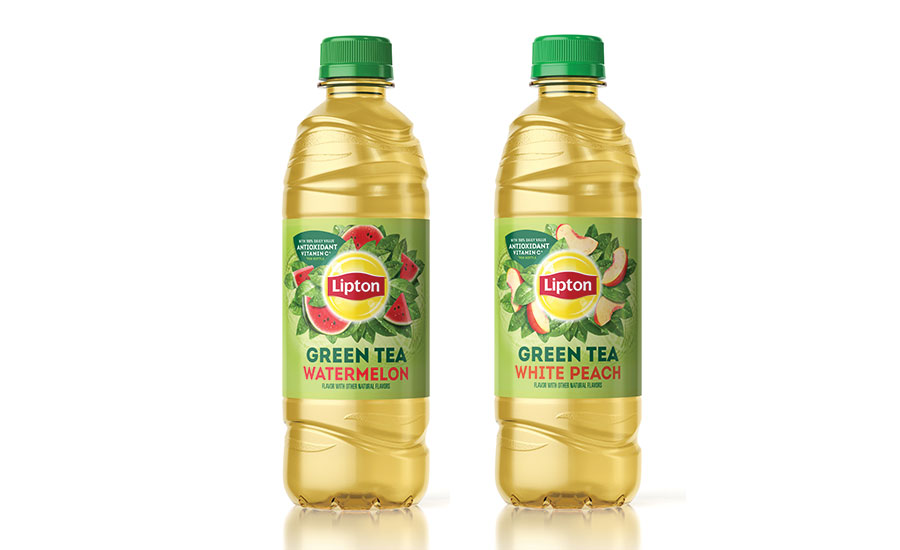 Click image for larger version
RTD green tea had dollar sales of $18.6 million for the 52 weeks ending April 25, up 72.7 percent from $10.8 million a year ago, according to Nielsen. Lipton released two new green tea varieties: Watermelon and White Peach. (Image courtesy of the PepsiCo)

Similarly, the Pepsi Lipton Tea partnership, a joint venture between Unilever and PepsiCo, released two new green tea varieties: Watermelon and White Peach. The teas contain 100 percent of the recommended daily value of the antioxidant vitamin C in each bottle, and contain 90 calories in each 16.9-ounce bottle, the company says.

As the tea market looks to gain back some of its losses from the past year, experts note that health and wellness, premiumization, botanical blends and low-alcohol hard teas and seltzers are giving a lift to the tea category. 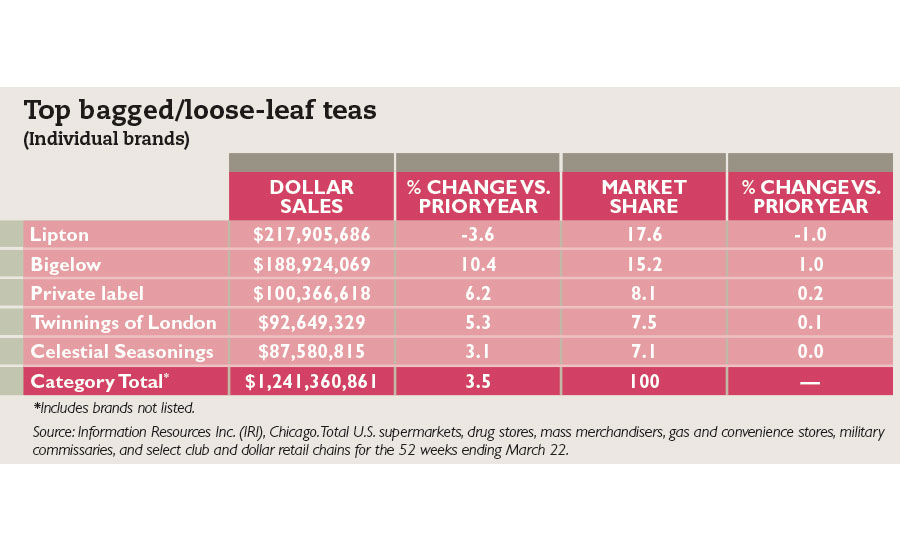 “In the bagged tea market, there seems to be more emphasis by companies such as Bigelow to introduce wellness teas, following the trend blazed by Celestial Seasonings,” BMC’s Dilworth says. “In the past few years, super-premium outfits like Republic of Tea have increased their offerings in seemingly every niche, such as hibiscus, rooibos, matcha and botanical blends marketed as ‘beauty’ teas, to name a few.”

When it comes to packaged tea, black tea is No. 1, with $618 million in sales for the 52 weeks ending April 25, followed by herbal and green teas with sales of $478 million and $209 million, respectively, Nielsen data reports

Hard teas also are thriving in the market. For the one-week period ending April 18, sales of hard teas were up 28.4 percent versus a year ago, Nielsen data suggests.

In May, Las Vegas-based Two Chicks and founder Meghan Hanna and Chief Executive Officer Linda Cash added three new RTD sparking cocktails to their lineup, including Sparkling Vodka CuTea, a premium, vodka-based cocktail made with natural essences of peach paired with cucumber tea and a subtle finish of thyme, the company says. 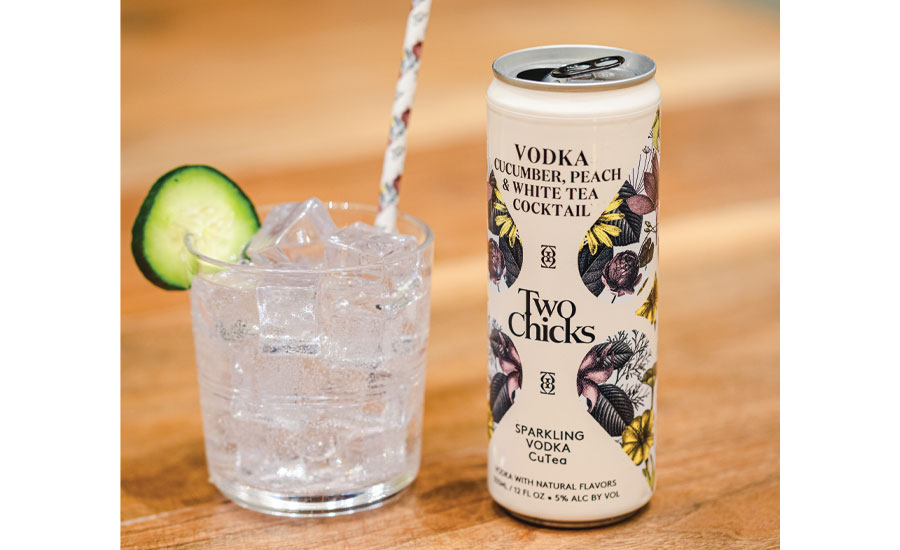 Click image for larger version
Hard teas are thriving in the market. For the one-week period ending April 18, sales of hard teas were up 28.4 percent versus a year ago, Nielsen data suggests. In May, Two Chicks released Sparkling Vodka CuTea, a premium, vodka-based cocktail made with natural essences of peach paired with cucumber tea and a subtle finish of thyme, the company says. (Image courtesy of Two Chicks)

With the number of flavor innovations and tea styles continuing to evolve, experts predict low-digit growth for the overall tea category, which could drive sales by offering more premium products, particularly as tea producers face stiff competition from health-and-wellness brands.

IBISWorld’s “RTD Tea Production in the US” report suggests that greater consumer demand will bolster profitability for companies that can attain higher product prices, as differentiated tea offerings have enabled industry players to charge premium prices for unique blends.

“Overall, IBISWorld expects industry revenue to grow at an annualized rate of 1 perfect over the next five years to $6.5 billion in 2023,” the report states.