Whether it’s Amazon’s acquisition of Whole Foods Market or Walmart’s acquisition of Jet.com, the growth and impact of grocery eCommerce has become ever more visible in the past few years. Although consumable eCommerce is growing, the market still is adjusting to find the most-effective model while also breaking down the barriers to entry that prevent some consumers from entering the market.

“Ecommerce continues to exert a strong presence in the retail food industry. Growth of eCommerce grocery increased approximately 25 percent between 2015 and 2016 and is expected to increase at an ever-increasing rate over the next several years,” says Jon Hauptman, senior director at Long Grove, Ill.-based Willard Bishop, an Inmar analytics company.

“The eCommerce consumables sector is projected to grow quickly during the next few years, reaching 5.5 percent of total sales by 2022,” says Susan Viamari, vice president of Thought Leadership at IRI. “While this is lower versus the total grocery eCommerce and the non-food section, it’s still remarkable growth.”

Further supporting growth, grocery has the most loyal online shoppers, according to Chicago-based Mintel in its June report titled “Online Shopping – US.”

“In fact, grocery was the third most-shopped retailer on a weekly basis, with nearly 20 percent shopping online weekly,” the report states. “This suggests that those who are comfortable buying groceries online are doing so regularly and are likely substituting their online trips in place of in-store trips.”

Grocery eCommerce is likely to surpass forecasted figures as food retailers adapt to eCommerce at a quicker pace than other retailers, Willard Bishop’s “2017 Future of Food Retailing” report notes. The rapid adoption by retailers of consumables has been fueled by a variety of factors, including the size of the grocery market itself, the increasing number of digitally savvy consumers and the time-starved lifestyles of many consumers, it adds.

Top reasons consumers say they choose click-and-collect, according to a survey from Information Resources Inc. (IRI)

Amazon’s acquisition of Whole Foods Market was another factor that influenced greater grocery retailer participation in the eCommerce sector, according to Hauptman, who notes that upon the acquisition, other retailers were pushed to concentrate more on their eCommerce strategies.

“Amazon’s acquisition of Whole Foods shook the retail food industry and forced traditional retailers to ramp up their attention and efforts on their own eCommerce solutions,” he explains. “Many other retailers have now implemented basic click-and-collect or delivery options; many using third-party services such as Instacart to fulfill this offering. However, these basic ‘entry-level’ offerings will not be sufficient for many retailers who will be rethinking their approach to eCommerce grocery over the long term.”

Click-and-collect and delivery are the dominant eCommerce models currently making headway in the market. Viamari highlights click-and-collect as a particularly promising model, valued at $400 million in 2016. IRI expects it to grow to more than $6.6 billion by 2022, she adds.

“Delivery is another model that retailers are really exploring, though it seems the ‘right’ model has not yet been developed,” Viamari says. “Drones, Amazon Key, Instacart, etc., are all examples of models that are being explored. Of course, the biggest challenge with many consumables is for fresh categories.&r

“The biggest benefit of click-and-collect is avoiding the high costs of home delivery,” he says. “Fulfilling the ‘last mile’ is the most complicated and costly portion of the eCommerce grocery value equation.”

Although some consumable categories can be harder to sell online, beverages and shelf-stable items are most-often ordered for delivery or in-store pick-up, according to Mintel’s November 2016 report titled “The Food and Drink Shopper: Spotlight on Technology – US – Delivery/Pick-up.”

The report also highlights a study conducted in August 2016 by Mintel and Warren, N.J.-based Lightspeed LLC, a data collection firm, in which 1,184 internet users ages 18 and older were asked which types of foods and drinks they order online for delivery or in-store pick-up. The results showed coffee and tea as the No. 1 products sold via online shopping, with 37 percent of consumers listing it.

However, Willard Bishop’s Hauptman notes that some companies are thinking outside the box, breaking away from traditional eCommerce models by creating their own niche in the online marketplace.

“Some companies are finding their own unique niches in the eCommerce grocery marketplace,” he explains. “An example of this is Brandless.com, a company that sells their own brand of food and consumables products — many of them natural or organic — all at a single price point, i.e., $3 per item, and ships it to a shopper’s home. We’ll continue to see new ‘eTailers’ focusing on winning in small segments of the industry. However, the big win will be for supermarket chains that focus on reinventing their approach to eCommerce grocery and offer something completely different from that available at key competitors.”

Although eCommerce is gaining overall, several barriers to entry still remain, according to experts. Among them, Bellevue, Wash.-based The Hartman Group, a consultancy agency, released its “Food Shopping in America 2017” report, highlighting the fact that consumers still enjoy grocery shopping in-store.

“As our ‘Food Shopping in America 2017’ report finds, providing food for the household is an expression of love, care and nurturance for self and others,” said Laurie Demeritt, chief executive officer of The Hartman Group, in a statement. 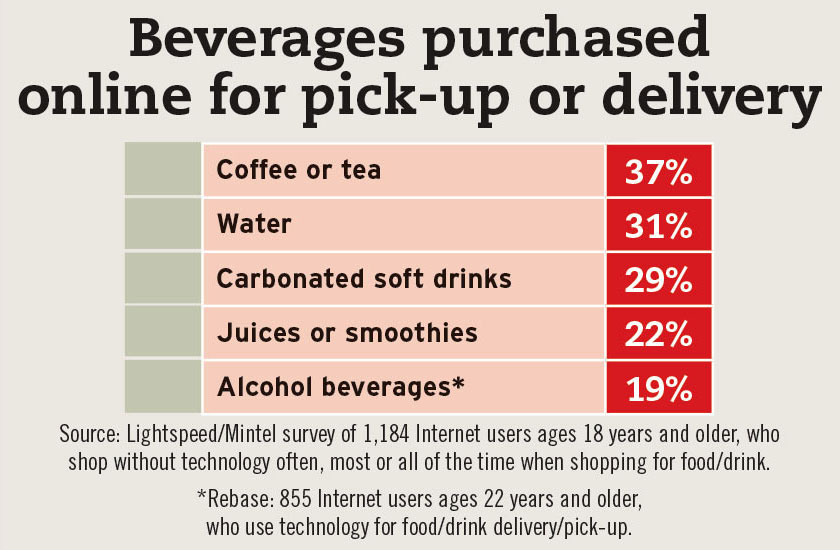 Top beverage categories purchased online for in-store pick-up or delivery, according to a survey by Mintel and Lightspeed.

Yet, this isn’t the only barrier. Although most consumers have access to Internet-connected devices, computers remain the dominant avenue for online shopping, with portable devices only used by a small percentage of consumers when shopping online, according to Mintel’s June report. Getting more shoppers to engage online with their mobile devices will be essential to growing eCommerce sales, it notes.

“Most consumers are likely still adapting to the idea of making purchases from their portable devices, but it’s possible some willing shoppers could face roadblocks on their smartphones if retailers’ or brands’ mobile sites are hard to navigate,” the report states. “Security is also a fear on some shoppers’ minds, so offering a quick and seamless payment option through a mobile app or third party, such as Apple Pay, is another way to help relieve shoppers’ stress.”

Additionally, Amazon’s dominance in eCommerce can be intimidating to retailers looking to enter the space. In 2017, Amazon captured 18 percent of online food and beverage sales in the United States, which is double the 9 percent achieved by the No. 2 online grocery retailer, Walmart, according to a November report from Rockville, Md.-based Packaged Facts titled “Online Grocery Shopping in the U.S.: Food Industry Disruptor Series.”

However, there are few ways that retailers can compete with the eCommerce giant, the Packaged Facts report notes. It highlights the potential growth of the market and the room for all companies to participate in eCommerce.

“Beyond the sheer projected size and growth of online grocery, Amazon’s competitors can capitalize on the fact that the time-sensitive nature of perishable groceries is something new for Amazon, leaving space for many others to develop their online grocery services without having to directly compete against Amazon in terms of delivery or other areas at which Amazon already excels,” the market research firm stated in a press release. BI

Consumers to spend $100 billion on FMCG eCommerce by 2025

2015 Craft Beer Report: Beer segment moves from a trend to a cultural movement