2017 Beverage Innovations of the Year

With consumer preferences constantly shifting, staying up-to-date is more important than ever as competition grows even greater. As new trends arise, new beverage launches are exciting the U.S. market.

The editors of Beverage Industry analyzed the new beverages launched throughout 2017 and selected five brands that they think are driving innovation and energizing consumers. The following are Beverage Industry’s 2017 Innovations of the Year:

“The [inspiration came from a] void in the market for a carbonated pre-workout option, which is not only clinically proven to function, but also tastes amazing. The gym-goer who is looking for a product or solution, and the rise in popularity of carbonation, made HEAT a next step in our portfolio,” says Vanessa Walker, executive vice president of sales and marketing at Celsius Holdings Inc. “Giving the CELSIUS consumer a larger size (16 ounces versus [the] current 12-ounce original line), with a different look and feel, visually helps the brand appeal to energy consumers seeking the next level of energy.” 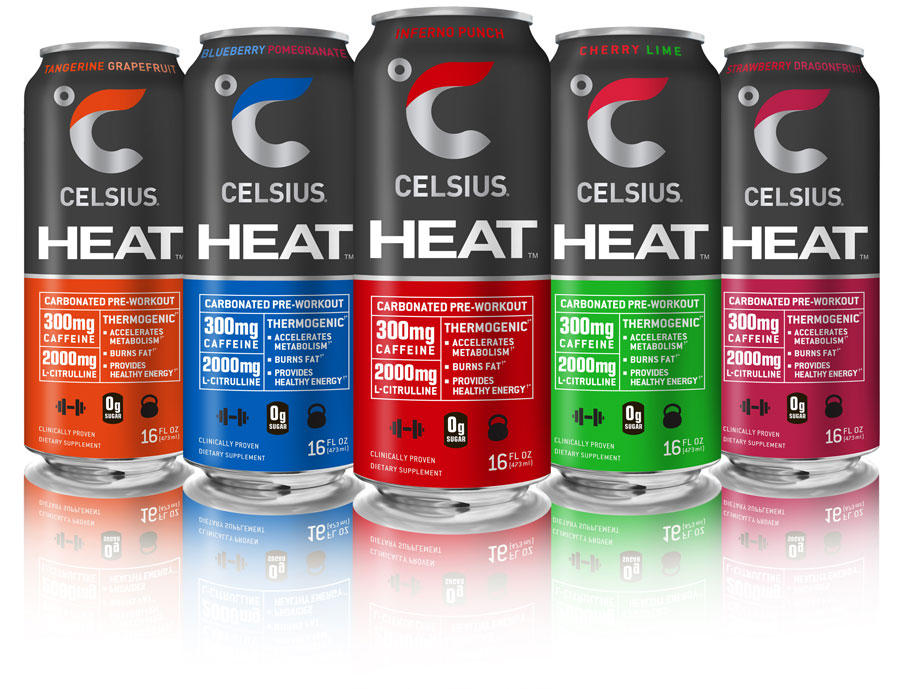 Similar to its original line of products, CELSIUS HEAT is a dietary supplement that contains the same proprietary thermogenic formula, which accelerates the metabolism, boosts energy and accelerates calorie and fat burning, the company says. The HEAT formula adds to this 300 mg of caffeine and 2,000 mg of L-citrulline, an amino acid. The product launch occurred in two phases. In the early second quarter of 2017, the lineup became available in fitness channels in three flavors: Inferno Punch, Blueberry Pomegranate and Cherry Lime. Phase two, in September, launched two new HEAT flavors — Strawberry Dragonfruit and Tangerine Grapefruit — in fitness channels, and the initial three flavors expanded distribution into the convenience channel.

“HEAT has been met with tremendous acceptance. We’ve had a fantastic time with this brand, which we’re calling our ‘Trainer’s Grade version of CELSIUS,’ and we’re just getting started. In many ways, ‘What does Celsius do?’ is more easily answered in this second product line as we’re touting our thermogenic science to a fitness loyalist who already understands the concept of a pre-workout as an efficacious anytime drink,” Walker explains. “For those who just love energy, they are discovering the great taste and wonderful feeling HEAT produces. … The consumer reaction was an overwhelming success at the first debut [at] the Mr. Olympia body-building show in Las Vegas this September.”

The company plans to continue the expansion of the HEAT line by introducing new SKUs and adding distribution in new channels. Additionally, it is launching a nationwide marketing campaign — PROVEN — to promote HEAT as it expands. 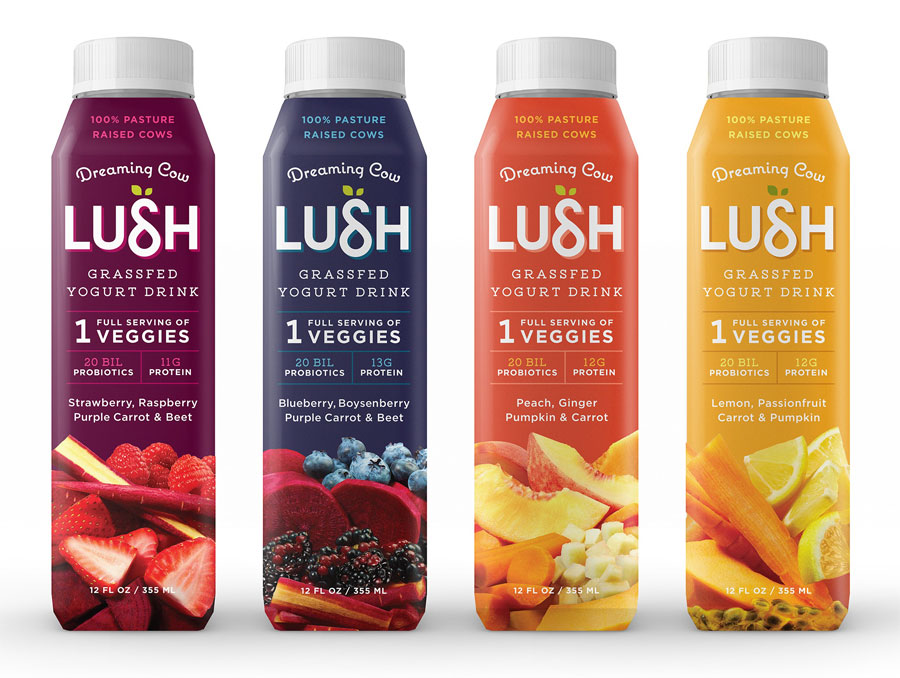 “We’re also passionate about health, nutrition and animal welfare. This is how we came to create LUSH, which is a functional drink that solves a problem and gets yogurt into other meal times, not just breakfast. Only about 10 percent of Americans get the recommended daily serving of fruits and vegetables, and we wanted to address this gap. So, we set out to create a new, all-natural drink that tastes great, adds more fruits and veggies to people’s diets, meets the needs of busy people who want to be healthy, and supports the welfare of animals, and we think we’ve achieved all that with LUSH.”

LUSH is a line of nutrient-dense yogurt drinks made with dairy from 100 percent grass-fed and pasture-raised cows. The lineup blends fruits with one full serving of vegetables and more than 20 billion colony-forming units of clinically proven probiotics, the company says. A full-fat yogurt drink, LUSH boasts antioxidants; vitamins A, B and C; iron; calcium; and potassium in each 12-ounce bottle. It is available in four better-for-you flavors: Strawberry, Raspberry, Purple Carrot & Beet; Blueberry, Boysenberry, Purple Carrot & Beet; Peach, Ginger, Pumpkin & Carrot; and Lemon, Passionfruit, Carrot & Pumpkin.

Consumers have had positive reactions to the new product line, Wehner notes.

“People don’t know what to expect when they know LUSH has a full serving of veggies, but after they drink it, they can’t believe how great it tastes,” he says. “Responses like, ‘Wow, this tastes really good,’ happen often.”

With the success of the product launch, the company plans to expand the flavor offerings as well as distribution for LUSH. 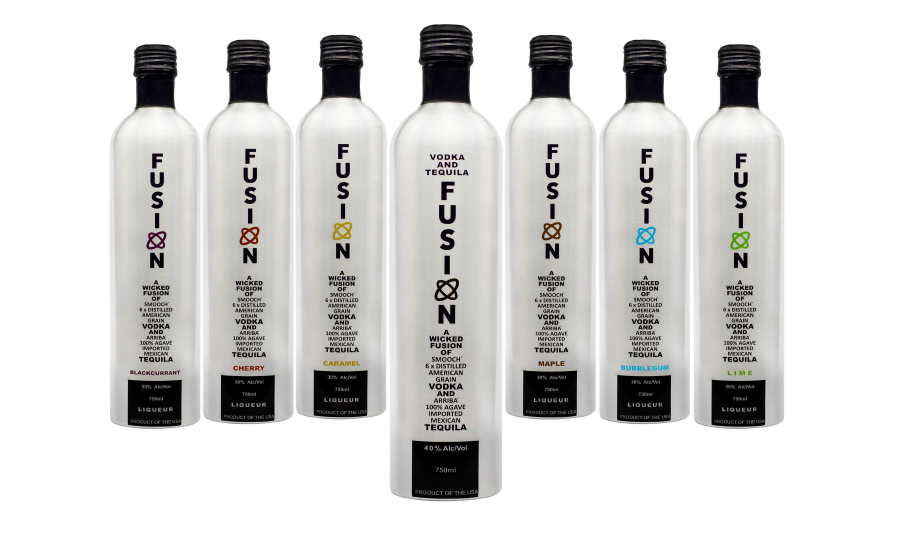 “As a company in South Africa, we have been marketing my Smooch Vodka brand since 2006 with the addition of the Arriba and Fusion brands in 2010 [and] 2011. It was always my dream to bring these brands to the USA as I always felt that they needed a bigger market to grow in,” he explains.

Vlavianos says his plan was to create a product that was unique and premium. “Something so different that it could attract attention to my two core brands while at the same time becoming an exciting brand in its own right.”

With this objective, Fusion launched this summer in select California markets. At 30 percent alcohol by volume, Fusion combines the company’s Smooch Vodka and Arriba Tequila. Fusion is available in seven flavors — Original, Blackcurrant, Cherry, Caramel, Maple, Bubblegum and Lime — and is packaged in re-useable aluminum bottles offered in 750-ml and 1.75-liter sizes.

Since its August launch, the product has been well received, Vlavianos says. “The reaction has been phenomenal, and we have had many people congratulate us on the concept, the look of the product and the unique taste of the various variants that we have put on offer,” he says. “All the variants so far have had equal reaction starting from the younger 21-plus market that really seem to like the Bubblegum flavor to the general market demographic response, which favored the Lime and the earthy Caramel and Maple flavors.”

The company is actively looking to expand its distribution and is in discussions with distributors and brokers in several states, he adds.

At The Beverage Forum 2017, Purchase, N.Y.-based PepsiCo Inc. Chief Executive Officer Indra Nooyi called for more innovation in a handful of beverage categories, including sparkling beverages. In line with Nooyi’s call-to-action, PepsiCo launched LEMON LEMON. Available in Original, Blackberry and Peach, LEMON LEMON is a mix of lemon juice, bubbles and a touch of sweetness. 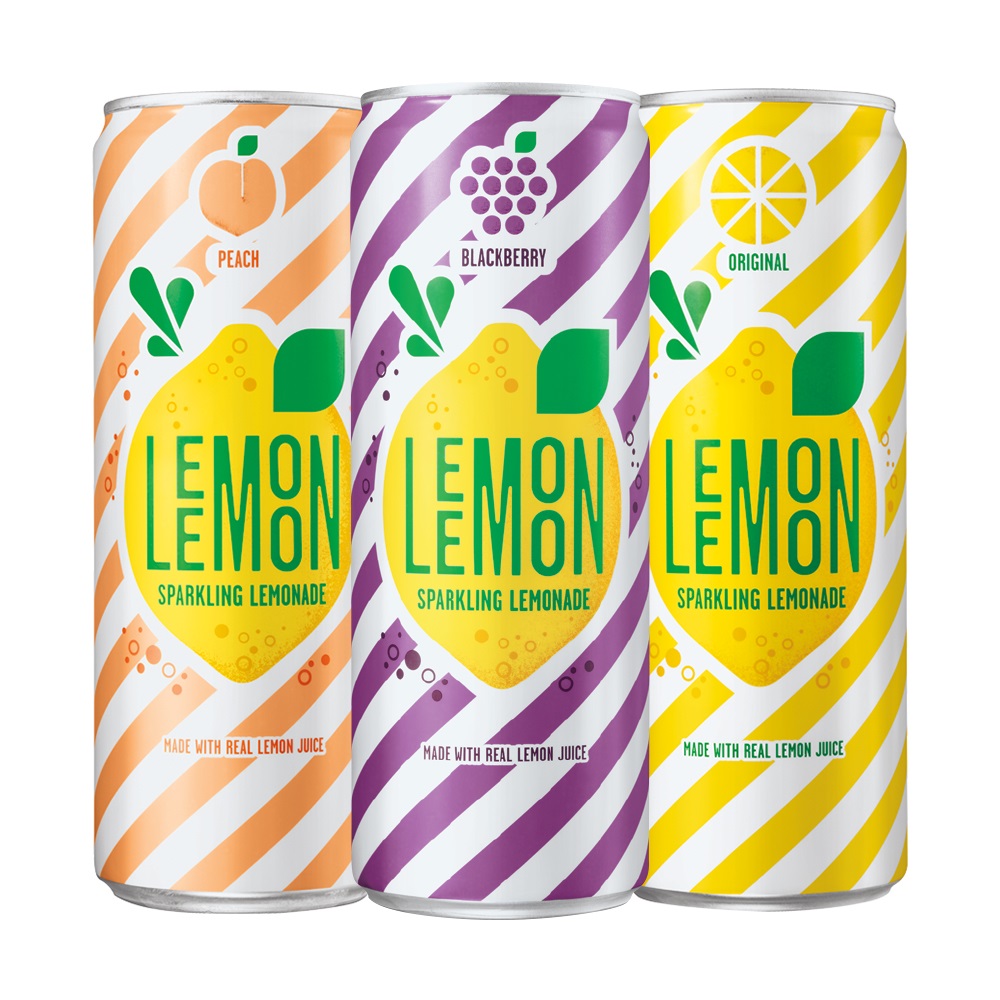 Lemon Lemon is a mix of lemon juice, bubbles and a touch of sweetness, designed to be a better-for-you product featuring just 70 calories and 15 grams of sugar in each 12-ounce can. (Image courtesy of PepsiCo Inc.)

“Sparkling lemonade is a huge category globally and while still in its infancy in the U.S., it’s growing rapidly, driven by existing lemonade drinkers seeking sparkling options,” says Gary So, vice president of marketing and portfolio transformation at PepsiCo.

Not only do the products appeal to American’s love of bubbles, but also their desire for better-for-you products. LEMON LEMON contains just 70 calories and 15 grams of real sugar in each 12-ounce can.

“Our [research and development] (R&D) team worked hard to create a great-tasting product that’s in line with a growing consumer trend toward products with no artificial sweeteners,” So explains. “… LEMON LEMON is a great example of what we at PepsiCo call a next-generation beverage — a modernized beverage option with unique flavors and lower calorie counts.”

LEMON LEMON launched in February and now is available nationwide in the United States, Canada and in select markets in Western Europe. Since its launch, consumers have offered positive feedback, So says.

“We are hearing great feedback from consumers,” he says. “They love the colorful packaging, delicious flavors and that it is a lower-calorie beverage with no artificial sweeteners or flavors.”

During 2016, the kombucha market grew by about 41 percent, according to New York-based Beverage Marketing Corporation. This quickly growing market offered a great opportunity for Holly Lyman, queen bee of Wild Tonic, a brand of Good Omen Bottling Co., Cottonwood, Ariz., to put her creativity to the test. 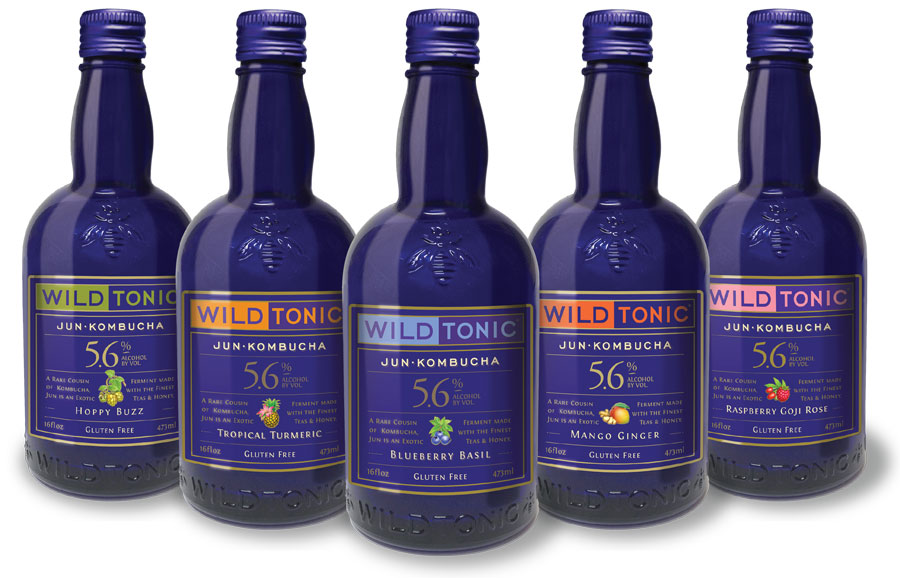 “As an artist, I’m always inspired to create new things. I wanted to brew something that would expand peoples’ ideas about what kombucha could be and prepare them for what it is about to become,” Lyman explains. “When I began working with the jun culture, [which] feeds on honey instead of sugar, it was relatively undiscovered. After developing the original recipe for Wild Tonic without alcohol, the 5.6 percent [alcohol by volume] (ABV) was the next logical progression. There were no books on how to make Jun or how to make an alcohol version, so experimentation and years of trial and error were my only guides.”

Giving this category a truly one-of-a-kind option, the company introduced Wild Tonic Jun Kombucha Ale, a lineup of its jun kombucha products featuring alcohol. The lineup is gluten free and rich in probiotics, prebiotics and organic acids. Each 16-ounce bottle of the adult kombucha contains 70 calories and 12 grams of sugar.

The product line initially launched in January with two flavors: Blueberry Basil and Tropical Turmeric. Since then, the company introduced three additional flavors: Hoppy Buzz, Mango Ginger and Raspberry Goji Rose. Wild Tonic is packaged in 16-, 32- and 64-ounce bottles, and also is available in 5-gallon kegs.

“We have a solid core of Wild fans who profess their enthusiasm for us daily on Instagram and Facebook,” Lyman says. “Already, it is in the Top 10 selling beers in many of the retail chains that carry it.”

After the success of Wild Tonic Jun Kombucha Ale, the company plans to continue expanding distribution and sharing new innovations next year. BI