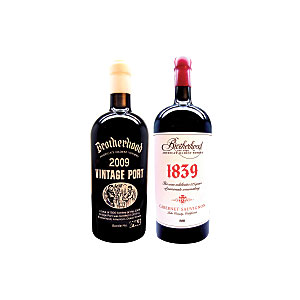 In its 175 years of business, Brotherhood Winery has seen many changes within the wine industry and has had the opportunity to set a few trends in line with those changes. “Our history provides a good perspective of the changes of the industry in the last 175 years,” says Hernan Donoso, president of the Washingtonville, N.Y.-based winery. “From [our start with] sacramental and medicinal wines, Brotherhood Winery has adapted to each of the eras in a different way, capitalizing on new business opportunities and adding new capabilities with investments in technology, wine-making facilities and renovations.”

In fact, change is what brought the winery into business in the first place, according to Donoso. “John Jaques, one of the first to establish a commercial vineyard in Orange County, N.Y., began selling grapes in 1837,” he explains. “When the tradable price suddenly dropped from 15 cents to 13 cents per pound, Jaques was unwilling to let his extraordinary fruit go for such a low price. It was then he set his sights to a new venture — wine — and thus founded the winery in 1839.”

As one of the first wineries in the country, its original business prospects focused on religious organizations, rather than the at-home wine consumer, Donoso says. “As one of the earliest members of the local Presbyterian congregation, [Jaques] saw the opportunity in producing a wine of pure nature that would be ideal for Communion purposes,” he explains.

This religious affiliation turned out to be the winery’s saving grace during Prohibition, when it was allowed to continue producing its wines for sacramental purposes, Donoso says. During this time, the winery continued to nurture its relationships with local churches and became endorsed by the New York Archdiocese, ultimately supplying 70 percent of the Catholic community’s wine during Prohibition, he notes.

The winery also produced wines for medicinal purposes. “One of our labels used to say, ‘Cherry Port, a fine Medicinal Wine,’” Donoso explains. “During that time, the medical community embraced the notion that wine was beneficial for the body. It was praised for building strength and renovating the system and was recommended as a gentle stimulant and health tonic.”

Of course, the winery also produced wines for social consumption as well. In 1886, Jesse Emerson Sr. and his son Eduard purchased the winey and named it Brotherhood Wine Co. The Emersons expanded the winery’s business from sacramental to foodservice by promoting their products to restaurants and hotels like The Waldorf Astoria and the Broadway Central Hotel, Donoso says.

Around this time, the winery also started another trend. Under the Emersons’ expansion, the winery purchased a vineyard in California and became one of the first East Coast wineries to have vineyard resources on both sides of the continent,” Donoso says.

Today, the winery sources the majority of its grapes from various regions of New York, including the Finger Lakes region and Long Island. “New York is very well known for its Riesling and quality Pinot Noir, as well as many other grapes,” Donoso says.

These grapes are used to help the winery produce more than 500,000 cases of wine each year, including a range of its own New York Premium, red, white, dessert, sparkling and specialty wines as well as private-label wines. The winery also offers imported red and white wines under the Casas Patronales label.  Of the more than 100 wines in its portfolio, the Brotherhood Riesling, Brotherhood Pinot Noir and sparkling wines are its most popular, but its Holiday spiced wine is especially popular during the holidays, Donoso notes.

The winery also makes use of modern advances in technology to ensure that it produces sufficient quantities of its quality wines year after year.

“In 2005, a new partnership between the Chadwick, Castro and Baeza families started a process of modernization, restoration and expansion of Brotherhood Winery, increasing the bottling facility’s [capacity] to 1.5 million cases a year and expanding the Brotherhood brand while growing the contract packing business for private-label wines,” Donoso says. In November 2010, the winery also installed an 81.7-kilowatt solar array with more than 100 panels, added a new warehouse, and upgraded all of its wine-making facilities, wine tanks and filtration systems, he notes.

Today, Brotherhood Winery has the capacity to produce more than 8,000 cases of wine and cider a day in bottles, kegs, bag-in-box and bulk formats, he says.

Through distribution partnerships with Opici Family Distributing Co. and Empire Merchants North, Brotherhood Winery’s wines are available in both Metro New York and upstate New York. It also has distribution in New Jersey and parts of New England, giving the winery a following that stretches throughout the East Coast all the way down to Florida, Donoso says. The wines also are available for purchase online, and the company will ship them anywhere where alcohol can legally be purchased and received, he says.

Celebrating with the people

Brotherhood Winery also has a history of bringing consumers into the winery to enjoy the wines. “Brotherhood Winery was one of the first commercial wineries to open its doors to visitors,” Donoso explains. “In the 1960s, we were one of the pioneers of wine tourism and developed a formal program, offering up to 90 tours and seeing about 5,000 visitors each day.”

Today, the winery hosts a full calendar of events, including Hudson Valley Wine Trail events, festivals, holiday parties, live music, fall crush weekends — at which visitors can participate in the tradition of grape stomping —  as well as daily winery tours.

The winery also continued its tradition of celebrating with consumers by launching three new products and unveiling a new Wine Museum to commemorate its 175th anniversary and celebrate its status as the oldest continuously operating winery in the country.

On Oct. 9, 2014, Brotherhood Winery hosted more than 200 guests, including distributors, members of the press and local dignitaries, for a private event in its Grand Monarque Hall to celebrate the winery’s 175th anniversary. These guests were given a first taste of one of the winery’s newest releases: Brotherhood’s limited-edition 1839 Cabernet Sauvignon, which consists of 75 percent Cabernet Sauvignon, 14 percent Petite Syrah, 5.5 percent Cabernet Franc and 5.5 percent Merlot. In order to preserve the identity and character of the wine’s varying grapes, Brotherhood Winery aged the wine for 15 months in barrels consisting of 30 percent new American oak and 70 percent French oak, resulting in a deep, ruby-colored wine with the flavors of wild berries, blackberries, cherries and spice, the company says.

Brotherhood Winery also released a limited-edition 2009 Vintage Port in October and a limited-edition Rebel Reserve Cider in December as part of the anniversary celebration. The 2009 Vintage Port is an unfiltered wine that was matured for 30 months inside new American oak barrels, giving the wine a dark purple color and vanilla oak notes, it says. The Rebel Reserve Cider is made with an apple combination that makes it a bit less sweet and was barrel-aged in oak barrels for four months prior to bottling, giving it an oaky taste, it says.

As the company looks beyond these past 175 years, the winery plans to continue to be a leader in the wine industry. “As [one of the] oldest [wineries] in America, Brotherhood Winery has an obligation to ensure that our brand is always recognized for producing wines of the best quality and that we remain a relevant player in the East Coast wine industry,” Donoso says. “We are proud of Brotherhood Winery’s rich heritage, and today we continue providing quality products using eco-friendly energy, high-end technology, and a great winemaking team. We believe this is the perfect blend to help us satisfy a sophisticated consumer in a highly competitive market.”