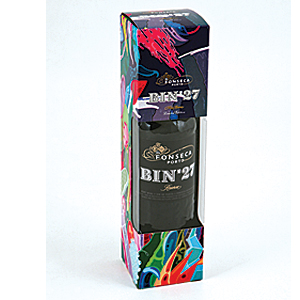 The packaging highlights Fonseca BIN 27’s support of the Waterkeeper Alliance, a nonprofit organization that connects and supports local Waterkeeper programs to provide a voice for waterways and their communities. For centuries, the Port industry has relied on the Douro River to carry their Port wines from the vineyards to the coastal town of Vila Nova de Gaia. “Thanks to Fonseca’s contribution through the Erik Parker Artist Series, the Waterkeeper program is able to help preserve the health of more than 220 rivers around the world,” said Marc Yaggi, executive director of the organization, in a statement. In 2012, Fonseca introduced the first BIN 27 Artist Series, featuring the work of the late Portuguese graphic designer Sebastião Rodrigues. In 2013, the Alliance was able to bring 225 educational programs to local communities because of BIN 27’s support. The third edition with Parker reflects the brand’s continued commitment to issues that affect waterways, from pollution to climate change, it says.