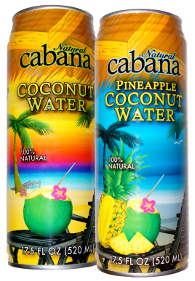 The Pulse Beverage Corp., Northglenn, Colo., launched a new wholly owned subsidiary, Pulse Beverage S.A., in order to establish a presence in Mexico. With its line of Natural Cabana Coconut Waters, the company plans to capitalize on the lack of premium, reasonably priced coconut water available in Mexico, it says.

Pulse's Mexican venture will be headed by Carlos Villarreal and his team, of Borrega Consulting Inc. Borrega is a San Diego-based international business development consulting and brokerage firm with more than 16 years of expertise in Latin American business development. Villarreal was responsible for the introduction and distribution of Monster Energy drinks in Mexico in 2004 and led the expansion across all of Mexico until June 2010. Villarreal also has worked with leading brands such as Dr Pepper Snapple Group’s Dr Pepper and MillerCoors’ Miller, among others, in their entry/distribution strategies. He also has served as a director for Anheuser-Busch and for Grupo Modelo in the United States and Mexico.

"We are extremely excited to have Borrega Consulting lead our roll-out into the Mexican beverage market,” said Pulse Chief Executive Officer Bob Yates in a statement. “Their track record in Latin America and the successful roll-out of Monster Energy drinks throughout Mexico provides us with an experienced team and valuable relationships, which we believe will help to quickly secure key accounts for coconut water and pave the way for expanding our lemonades and limeades into Mexico. We plan to aggressively pursue this opportunity by securing accounts with large national chain stores including Walmart, Costco and Soriana (totaling more than 3,000 stores) and large national convenience stores such as Oxxo and 7-Eleven (totaling more than 13,000 stores)."

Villarreal added: "Mexico is a massive beverage market and has been reported the largest consumer of soft drinks in the world per capita. Coconut is used in some Mexican dishes, but we believe that benefits of drinking coconut water haven't been addressed to consumers. There is a tremendous opportunity here, and we believe that we will be able to create market demand with Pulse's great-tasting Natural Cabana Coconut Water at a price that consumers will like.”

Up Close With: Pulse Beverage Corp.