Consumers can choose their side with Autobot, Decepticon cans

Big Red Soda is getting in on the action of summer movie “Transformers: Age of Extinction” with six limited-edition cans. In honor of the fourth movie in the action 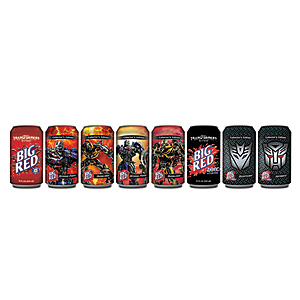 series, four of the cans in this packaging series feature updated renderings of “Transformers” characters Optimus Prime and Bumblebee in various poses. Fans also can pick a side with collector’s edition Big Red Zero Autobot and Decepticon themed cans. Also as part of Big Red’s “Transformers” promotion, the soda brand is hosting a $25,000 sweepstakes, which gives fans the chance to win “Transformers” collectable figures, Hasbro toys inspired by the movie, T-shirts, DVDs, posters or a cooler that transforms into a picnic table.