Most small-business owners see the world through rose-colored glasses when launching their companies, optimistic that their new ventures will succeed and thrive. In the case of Rooibee Red Tea, Louisville, Ky., this optimism has produced strong results. 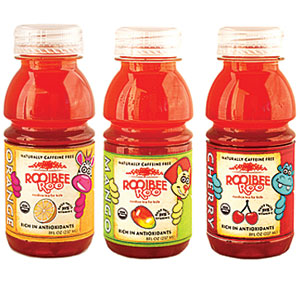 Founded in 2009 and now under the leadership of Chief Tea Officer Heather Howell, Rooibee Red Tea has grown more than 519 percent since 2010, she says. This spring, the company introduced a new line of Rooibee Roo kids drinks featuring rooibos and simple flavor profiles. Plus, the company is in the process of developing a new ready-to-drink essence line featuring less sugar, more rooibos and unique flavors, she notes. This year, Howell expects the company to experience 400 percent growth with its namesake Rooibee Red Tea line alone.

Boasting five varieties — Watermelon Mint, Peach, Vanilla Chai, Cranberry Pomegranate and Unsweetened — all Rooibee Red Teas are certified organic by the U.S. Department of Agriculture (USDA), naturally caffeine free, and rich in antioxidants from the rooibos. The beverages started out for sale at farmers markets in Louisville and today are sold at retailers nationwide in 20-ounce glass bottles. Watermelon Mint is the brand’s best seller, and new flavors are on the horizon, Howell notes.

Setting itself apart from black, green and white teas, rooibos is low in tannins, which significantly reduces the bitter aftertaste of the beverage, Howell says. This enables the beverages to pair well with many flavors and also to appeal to children.

Bringing healthful rooibos beverages to the kids drink category was particularly important to Howell when she joined the company. In fact, when she interviewed for the role of chief tea officer with the chairman of the board and the founder, Howell recalls that one of the first questions she asked was, “Why don’t you have a children’s line?”

After significant consumer testing, Rooibee Roo came to fruition in March. Like the flagship Rooibee Red Tea line, Rooibee Roo beverages are USDA-certified organic, naturally caffeine free, and rich in antioxidants, but they contain fewer calories and less sugar and are packaged in smaller 8-ounce PET plastic bottles. They also feature simpler flavor profiles that children can recognize and enjoy while showcasing and complementing the flavor of the rooibos at the same time, Howell points out. The lineup is available in Orange, Mango and Cherry flavors.

“We really wanted the kids to get a good mouth of rooibos,” she says. “We wanted them to understand that as they graduate from Rooibee Roo, they can then adopt Rooibee Red.”

“I always say we’re upheld to a standard,” she explains. “As a mom and a parent, this is extremely important — not only for me, but for everyone who works for Rooibee Red Tea.”

The drinks made their official debut online and at select grocery stores this summer, Howell notes. Despite Rooibee Roo’s newness to the marketplace, Howell 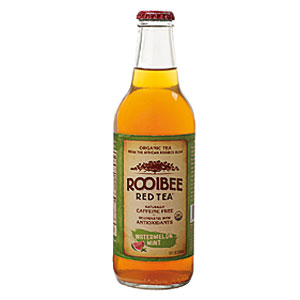 says she expects them to catch up to Rooibee Red Tea’s forecasted 400 percent growth rate quickly, based on the interest that retailers have shown in the brand. And expectations for the line don’t end there.

“One of the goals and objectives for all of us here at Rooibee Red Tea is to see our product in the hands of kids in school systems,” she says. “… I always say if a kid is eating healthy and eating well, it’s amazing what that can do for them educationally and their brain power and that kind of thing.”

Howell also notes that the company plans to add two new flavors to the kids drink line in the near future.

Additionally, to help get the word out about the brand, the company will launch a series of online videos that leverage the characters on the Rooibee Roo bottles, she says.

“One of my biggest passions with all the characters that you’ll see on the bottles is that they all have a story, so [the videos are] above and beyond the beverage and the bottle, but they’re about [how] you can be a kid, you can be different, you don’t always have to fit in, and drinking healthy and eating healthy is cool,” she explains. “There are going to be a lot of story lines that are going to be playing off those [ideas].”

Another significant effort to help the company get the word out about Rooibee Roo comes in the form of product demonstrations with retail partners, organizations and hospitals, Howell notes. For instance, the company recently donated 1,200 bottles of Rooibee Roo to Kosair Children’s Hospital in Louisville.

“You’ll start to see some really interesting things that we do on a very low budget but [that are] very powerful about kids,” Howell says.