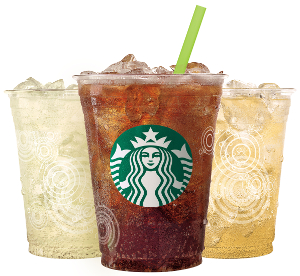 Fizzio sodas are available in Spiced Root Beer, Golden Ginger Ale and Lemon Ale flavors. Each of these flavors can be customized in terms of carbonation, the company says. The Fizzio machine carbonates finished beverages, ensuring that every ingredient in the beverage receives the same level of carbonation and maximum flavor, it explains. It also has the capability to adjust the amount of carbonation in each beverage. Plus, it provides the option for customers to experience beverages like Teavana iced tea and Starbucks Refreshers in a new way by “adding fizz” for $0.50.

Each Fizzio soda contains no artificial flavors, preservatives or high-fructose corn syrup and has 100 calories or fewer in a 16-ounce Grande size. The new Fizzio sodas will be available at select Starbucks locations in the United States.

Starbucks also introduced new and returning iced teas for the summer. The new Teavana Blackberry Mojito Tea Lemonade and returning Teavana Peach Green Tea Lemonade became available nationwide and in Canada beginning June 24. These Teavana shaken iced teas are slightly sweetened and vigorously hand shaken 10 times to help ensure that all of the ingredients are cooled down quickly and mixed well to bring out their distinct flavors, the company says.

“We have heard from our customers that they’re looking for more refreshing, cold beverages, especially during the warm summer months,” said Cliff Burrows, group president of the United States, Americas and Teavana, in a statement. “Fizzio handcrafted soda is unlike any soda in the marketplace because it’s handcrafted and made to order each time. The addition of Fizzio and Teavana iced teas gives our customers more refreshing beverage choices made with the premium ingredients they expect from Starbucks.”