Coke Zero is suiting up to celebrate the success of the Seattle Seahawks. After the Seahawks won the Super Bowl, The Coca-Cola Co. released a limited-edition 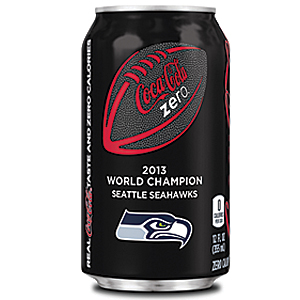 commemorative can. A limited number of specially marked 12-ounce Coke Zero cans were produced at the company’s Bellevue, Wash., plant and will be sold at select retail locations throughout Washington state while supplies last. “Coke Zero joins the legion of fans who cheered on their team to this thrilling victory,” said Bill O’Brien, senior vice president and general manager of the West region for Atlanta-based The Coca-Cola Co., in a statement. “With this special design, we’re raising a congratulatory toast to the Seattle Seahawks, their staff and the Seahawks’ ‘12th-Man’ loyalists.”