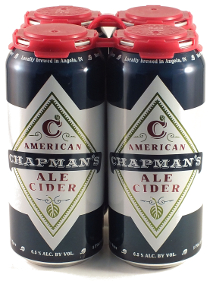 Chapman’s Brewing Co. launched Chapman’s American Ale Cider, which is a cider that combines malted barley and Cascade hops. Designed to appeal to both beer and cider drinkers, the beverage features the crisp, slightly sweet flavor of cider as well as the mouthfeel, color and head of an ale, the company says. A four-pack of 16-ounce cans has a suggested retail price between $8.99 and $11.99.