Craft beer grows double-digits in first half of 2013 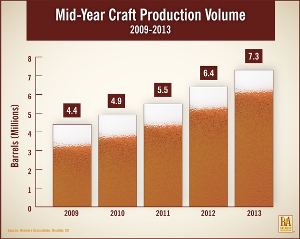 “Demand for beer produced by small and independent brewers has never been higher, as evidenced by increased production and the hundreds of new breweries joining the playing field each year,” said Paul Gatza, director of BA, in a statement. “Beer drinkers nationwide are responding positively to high-quality, full-flavored, diverse offerings from American craft brewing companies that continue to innovate and push the envelope.”

“More breweries are currently operating in the U.S. than at any time since the 1870s,” Gatza said. “With each new brewery opening, American craft brewers are reinforcing the U.S.’s position as the world’s most diverse brewing nation. It’s a very good time to be an American beer lover.”