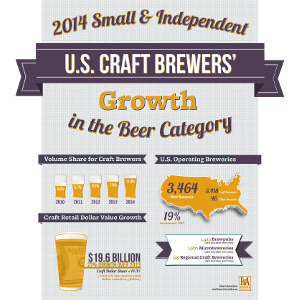 “With the total beer market up only 0.5 percent in 2014, craft brewers are key in keeping the overall industry innovative and growing,” said Bart Watson, chief economist for the BA, in a statement. “This steady growth shows that craft brewing is part of a profound shift in American beer culture — a shift that will help craft brewers achieve their ambitious goal of 20 percent market share by 2020. Small and independent brewers are deepening their connection to local beer lovers while continuing to create excitement and attract even more appreciators.”

Additionally, the number of operating breweries in the United States in 2014 grew 19 percent, totaling 3,464 breweries, according to the BA. With 3,418 of those breweries considered craft, the numbers are broken down as 1,871 microbreweries, 1,412 brewpubs and 135 regional craft breweries. Throughout the year, there were 615 new brewery openings and 46 closings.

Combined with already-existing and established breweries and brew pubs, craft brewers provided 115,469 jobs, an increase of almost 5,000 from the previous year, the association reports.

“These small businesses are one of the bright spots in both our economy and culture,” Watson added. “Craft brewers are serving their local communities, brewing up jobs and boosting tourism. Craft brewers are creating high-quality, differentiated beers; new brewers that match this standard will be welcomed in the market with open arms.”

To view an expanded infographic of the reported numbers click here.

The numbers provided are preliminary. The BA will release the list of Top 50 craft brewing companies and overall brewing companies by volume sales March 31. Additionally, a more extensive analysis will be released during the Craft Brewers Conference & BrewExpo America in Portland, Ore., which takes place April 14-17.