Up Close With: Balance enhanced water

Non-flavored waters use flowers for functions

When co-founders Martin Chalk and Peter Maher started developing their vision for New York-based Balance, their goal wasn’t to create a beverage company — it 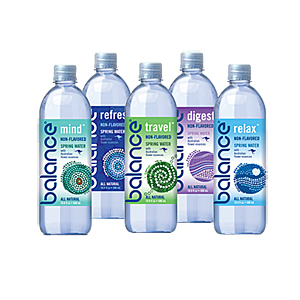 was simply to bring the homeopathic benefits of Australian flower essences to consumers, Chalk says.

“The intention when we started the company was just to try to give [consumers] a more convenient format to access flower essences, really,” he says. “We didn’t come about the other way — we didn’t say, ‘Let’s start a beverage company. What have we got out there that’s different and a major point of difference?’ We went about it the other way, saying, ‘Wow, flower essences are really cool. Let’s put them in spring water and make it easier for people to take them.”

As a result of this idea, the team merged Maher’s beverage industry and distribution background with Chalk’s biochemistry expertise to form Balance in 2006. Balance waters first became available in Australia and broke into the United States in 2008. All of the flower essences come from Australia, but the water sources are local to the distribution territory, enabling the waters to be produced and packaged locally, minimizing its carbon footprint, the company says.

Originally, the U.S. line was made up of four varieties: Balance Women, Balance Children, Balance Mind and Balance Travel. After the company realized it was too difficult to explain to consumers what the benefits of the Women and Children varieties were and why they were targeted at these demographics, it decided to keep the focus on the function instead of the target consumer, Chalk explains. Therefore, the company removed the Women and Children offerings from the line last year and replaced them with Relax, Refresh and Digest. Currently, Balance Refresh is the company’s best-seller, followed closely by Relax and then Mind, he says.

Balance Mind, Travel, Relax and Refresh also are available in Australia and Germany; however, the Digest variety, which contains a Paw-Paw flower essence that aids in digestion, never made its debut in these countries because of a cultural difference, Chalk says. In the United States, consumers often drink water with their meals, whereas people in other countries consume acidic drinks like wine to help break down their food, he explains. Due to this difference, the Digest variety wouldn’t have the same consumer appeal as it does in the United States, Chalk says.

Balance Mind, Relax, Refresh and Digest are available at select retailers in the United States, and Balance Travel is exclusively available in the travel channel. Previously, consumers had to fly to Australia on Qantas Airways or stay at an Intercontinental or Four Seasons hotel in Australia to get a bottle of Balance Travel. In April, the company announced a partnership with the Wyndham Hotel Group that enables U.S. Gold Status members to obtain the water upon check-in at select Wyndham hotels and resorts.

In addition to producing healthy, natural beverages, Balance is dedicated to giving back to the world. Last year, it donated money from the sale of its products to nearly 50 charitable organizations, including the National Aboriginal Community Controlled Health Organization and the National Breast Cancer Centre of Australia, it reports.

When Balance updated its lineup last year, it also updated the labels on its bottles. Each bottle features an embossed symbol with a different meaning. For instance, the graphic for Balance Mind was inspired by the Aboriginal idea of Dreamtime, which is the era when they believe the earth came into being, Chalk says.

“In the Dreamtime, they believe a seed was placed at the center of the earth, and from this seed a vibration extended, which affected all living and non-living things,” he explains. “What we’ve done is adapted that symbol, and what we have is a flower placed at the center of a water hole [because] that’s what we do — we place a flower into water and from there the properties of the flower as well as the vibrational energy come.”

In addition to building meaning and personality behind the brand, the new labels help to clarify the benefits of each variety, Chalk says.

“Our sales have gone completely through the roof since we brought out this new label, because now people are starting to understand a bit more about the product,” Chalk says.

Additionally, Balance recently rolled out a 330-ml bottle size across the line for the foodservice channel, Chalk says. The line also is available in 500-ml and 1-liter sizes.

One might imagine a garden of flowers planted like a farmland from which to create essences for Balance waters, but in actuality, the flowers come from some of the most remote areas of the Australian wild, says Martin Chalk, co-founder of Balance, New York. The plants are not farmed, planted, watered or fertilized. Workers at Wandarra Essences, a division of Balance, select a combination of new, mature and old blooms and then collect the flowers using twigs from the plant so that they are not contaminated by human touch, the company says.

To make the essences, the company lightly processes the flowers using proprietary methods that do not involve alcohols, preservatives or heavy industrial equipment, according to the company.

“We place the flowers in these beautiful glass bowls of spring water at the base of each of the plants and we use the … sun method of four hours in bright sunlight of infusing these flowers in the water, and that’s 90 percent of our flower essence,” Chalk explains. “[For] the other 10 percent, we actually boil the flowers for about five minutes.”

In order to minimize its carbon footprint and reduce shipping costs, Balance gets its waters from two different sources in the United States: one is outside of Lake Tahoe in California, and the other is in the Catskills Mountains in New York, Chalk says. These water sources were selected for their high altitude, pH and low total solids, which provides a cleaner, crisper taste that Americans prefer compared with a heavier mineral water taste that Europeans prefer, he adds.

Up Close With: TalkingRain's Sparkling Ice

Up Close With... Ayala's Herbal Water