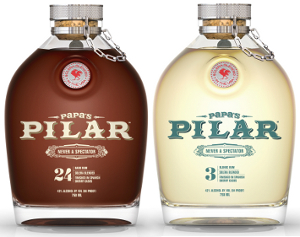 In conjunction with Ernest Hemingway’s estate, Hemingway Rum Co. LLC developed Papa’s Pilar super-premium rum, which was inspired by the author’s spirit of adventure, the company says. The name of the rum also represents Hemingway, with “Papa” referring to his nickname and “Pilar” referring to his fishing boat. Available in dark and blonde varieties, the rums were hand-selected from ports-of-call throughout the Caribbean, Central America and the United States for their age and character. Once brought to the United States, the Papa’s Pilar team of master blenders marry the rums in a solera aging and blending process, using American oak bourbon barrels, port wine casks and Spanish sherry casks, the company explains. The bottle’s structure and closure are reminiscent of World War II canteens, and the medallion on the bottle pays homage to Key West, where Hemingway once resided. A 750-ml bottle of Papa’s Pilar dark rum retails for approximately $39.99, and a bottle of the blonde rum has a suggested retail price of $29.99.