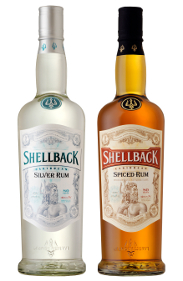 Produced at the West Indies Rum Distillery in Barbados, Shellback Silver and Spiced Rums now are imported into the United States by Grande Antilles Cane Spirits. Shellback Silver features floral flavors with hints of vanilla and tropical fruit, followed by a smooth, clean finish, the company says. Shellback Spiced has no added sugar and features a combination of all-natural spices from around the world, including cinnamon bark oil from Sri Lanka and Ceylon; ginger oil from China and Africa; clove oil from Madagascar and India; nutmeg from Indonesia; cassia from Vietnam and China; vanilla from Madagascar; and allspice from the Caribbean. Both expressions are a blend of continuous and pot-still components featuring neutral, heavy and aged light rum. Adding further depth to the final Shellback Spiced blend, the aged light rum spends a minimum of 12 months in used American bourbon barrels, which results in a smooth, clean taste with notes of caramelized honey, dark roast and brown spice, the company says. Shellback Silver and Spiced Rums are available in 50-ml, 200-ml, 375-ml, 750-ml and 1-liter sizes. A 750-ml bottle has a suggested retail price of $17.