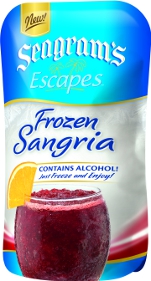 North American Breweries launched Seagram’s Escapes Frozen Flavors, which is a line of single-serve ready-to-drink frozen flavored malt beverages (FMBs). The new lineup includes flavors that are popular in its Seagram’s Escapes FMB lineup: Margarita, Strawberry Daiquiri, Piña Colada and Sangria. With 5 percent alcohol by volume, the frozen FMBs can be consumed directly from the 10-ounce pouch or poured into a glass. The product can be merchandised in the beer and cooler section, snack and seasonal aisles and on feature displays, the company says. Seagram’s Escaped Frozen Flavors has a suggested retail price of $1.99 for a single-serve 10-ounce pouch and $7.99 for a four-pack.