Beverage industry ups game in fight to save the planet

This year, the U.S. Plastics Pact, led by the Recycling Partnership, World Wildlife Fund (WWF) and the Ellen MacArthur Foundation, are seeking to create a path toward a circular economy for plastics in the United States by 2025. Through the “Every Bottle Back Initiative,” America’s leading beverage companies — The Coca-Cola Co., PepsiCo and Keurig Dr Pepper — are banning together to reduce new plastic use and improve the industry’s collection of 100 percent recyclable plastic bottles and caps so they can be made into new bottles and don’t end up as waste in oceans, rivers or landfills.

Part of the problem, though, is the confusion among consumers about packaging recyclability, according to a report from the Washington, D.C.-based National Consumers League (NCL), which is calling for changes to sustainability in food and beverage packaging for brands, retailers and policymakers.

"Consumers have no idea what is recyclable and what isn't," said Sally Greenberg, executive director of NCL, in a statement. "More effective and transparent labeling is necessary to advance sustainability goals for the benefit of consumers and the environment."

Kay Yoder, vice president of environmental health and safety and business continuity at Miami-based Southern Glazer’s Wine & Spirits (SGWS), agrees that consumer education is crucial to creating a circular economy and healing the planet, noting that supply chains, consumers and businesses all must do their  part.

“The basic principles of a circular economy are to design out waste and pollution, keep products and materials in use, and regenerate natural resource systems,” Yoder says. “… A total of 45 SGWS locations utilize Waste Management as a vendor for solid waste disposal. … From July of 2017 to August of 2019, total recycling activity increased by 32 percent.” 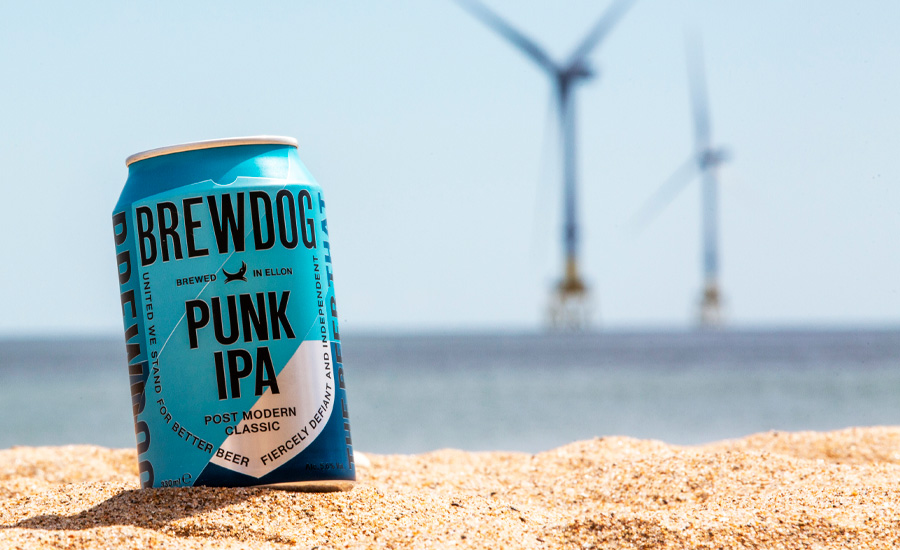 Click image for larger version
BrewDog, the world’s first carbon negative international beer business, is powering one of its breweries off of wind power and will install solar panels to power its brewery, headquarters and DogHouse hotel, Jason Block says. (Image courtesy of BrewDog USA)

Since the inception of Southern Glazer’s Zero Waste Initiative in 2014, a Bolingbrook, Ill.-based warehouse recycled 25 percent, or at total of 271 tons of waste material in 2015, while it recycled 54 percent of 760 tons of waste in 2018.

Yoder notes that more beverage industry plants are equipped with environmentally sound technology, green-designed buildings, conservation initiatives, and are achieving environmental certifications such as Leadership in Energy and Environmental Design (LEED) and ISO 14001, an international standard organizations can follow to improve sustainable business practices, she explains.

A sense of urgency

Although the quest to create a circular economy for plastics by 2025 is possible, “more importantly, it’s necessary,” says Jason Block, chief executive officer of BrewDog USA. “This certainly doesn’t mean it’s easy though. We had a long way to go at BrewDog, and in many ways, are still towards the beginning of the process.

“It’s going to take a commitment from breweries, our supply chain and distribution partners to really get there,” he continues. “Unfortunately, time isn’t on our side, and we all should be acting with a sense of urgency.”

While the Columbus, Ohio-based brewer initially thought it was doing its part for the planet, after hearing Mike Berners-Lee, an author and leading expert on carbon footprints, speak, they recognized their operations still were part of the problem.

Working with Berners-Lee and his team at Small World Consulting, the BrewDog team developed its carbon removal plan and created a sustainability report that outlines $39 million of green investments across its breweries and bars around the globe. They also received help from its crowdfunding platform, Equity for Punks Tomorrow, which boasts 130,000 investors.

“We’re now powering one of our breweries off of wind power with plans of adding solar power at another,” Block explains. “We’re purchasing enough offsets in the meantime to pull twice as much carbon out of the air as we put in.”

Block enthuses that BrewDog now is completely carbon-negative, making it the “world’s first carbon-negative international beer business.” The brewery now can remove twice as much carbon from the atmosphere as it emits each year, while simultaneously doing all it can to drive emissions to zero, he adds.

As part of its stepped up sustainability efforts, BrewDog has purchased 2,050 acres of Scottish Highlands to create the BrewDog Forest, and will plant 1 million trees there during the next few years. Other projects include the aforementioned solar panels to power its brewery, headquarters and DogHouse hotel; a hop farm and apple orchard added to the brewery campus; a wastewater treatment plant; an anaerobic digester; and electric delivery vehicles for local and regional deliveries. The brewer’s goal is to use some of the land to create a sustainable campsite that will host sustainability retreats and workshops for the public.

Noting that reducing the company’s environmental impact within its facilities, warehouses and fleets is an ongoing commitment, SGWS’s Yoder says that the company is rolling out best practices across all of its facilities. These include a recycling program that diverts recyclable material and reduces waste; installation of energy-efficient equipment such as electric forklifts and premium efficiency conveyor motors; and energy-efficient lighting technology such as LED light fixtures, timers/photocells and motion sensors.

She points out that the fleet department is seeing year-over-year improvement in reducing vehicle emissions. The Environmental Protection Agency (EPA) also has recognized the wholesaler’s fleet as a registered SmartWay Transport Partner.

“With a fleet of more than 2,600 trucks delivering 6 billion tons of freight to our customers annually, SGWS has installed technology and implemented programs that are designed to reduce emissions, increase route efficiency and safeguard the well-being of our employees,” Yoder says.

For instance, the supply chain installed a five-minute idle shut-off on all diesel engine trucks; governors on trucks limit the top speed; and trailer tire pressure regulators are increasing miles per gallon (mpg).

SGWS’s Florida fleet, which covers 12 million miles annually, saw a 56 percent reduction in idle time and a 7 percent increase in mpg, a decrease of 1,127 tons of carbon dioxide emissions over two years.

Once a sustainability initiative is in place, the anticipated return-on-investment (ROI) could take five to seven years for efficiencies and cost-savings around energy consumption, climate emissions, water usage, waste/pollution generation and supply chain to be realized, Yoder suggests.

While a significant amount of capital must be invested, BrewDog’s Block insists that ROI isn’t the only reason to choose sustainability.

He says, “Our carbon, our problem. Businesses need to drive change. We hope every government, business and person is taking the climate crisis seriously, because there is no planet B.