Like leaves that change color in the fall in response to their molecules altering because of surroundings, mass merchandisers are shifting strategies in response to changing retail environments. Although, in some cases, the numbers seem to show that the channel is wilting, a deeper look reveals that it is simply evolving into something better suited for the needs of today’s shoppers.

The latest data from Chicago-based Euromonitor International reports that mass merchandiser sales decreased 0.4 percent in 2018 while hypermarket sales — which includes sales from SuperTargets, Walmart Supercenters and similar retailers that offer a mix of groceries, clothing, household goods and more — grew slightly by 2.9 percent. Senior Analyst Bob Hoyler adds that the market research firm is in the process of updating these numbers with new data and estimates the decline in mass merchandiser sales to be closer to 2.6 percent. However, combined, mass merchandisers and hypermarkets saw about a 2 percent increase in sales in 2018.

Channel evolution is one of the main reasons for these slight declines for mass merchandisers. For starters, the major players in the channel, Bentonville, Ark.-based Walmart Inc. and Minneapolis-based Target Corp., are shifting their strategies to focus on omnichannel and eCommerce sales, which Euromonitor tracks separately. This redirected focus has taken investment away from new store openings, sometimes because they are not needed to fulfill consumer demands. At the same time, mass merchandise stores are being converted to hypermarkets to better meet consumer needs.

“It makes sense to also have robust grocery offerings,” Euromonitor’s Hoyler says. “It helps [consumers] to be able to knock out a supermarket run at the same time they’re going to pick up clothes or home supplies or anything else.” However, in terms of data, this strategy shifts sales gains from the mass merchandise channel to the hypermarket channel.

One factor truly contributing to the channel’s declining sales is the closure of Kmart stores by Sears Holdings Corp., Hoffman Estates, Ill. At the end of its 2016 fiscal year, which ended Jan. 28, 2017, Sears operated 735 Kmart stores. Euromonitor’s Hoyler estimates that the company only operated 240 stores at the end of 2018, and even more stores are expected to close this year. He explains that Sears did not make the proper investments in Kmart stores to keep them competitive. Kmart stores tend to be less organized and dirtier than Walmart and Target stores, he adds, leading Kmart stores to lose customers to other retailers.

By comparison, investments in better shopping experiences have propelled Walmart’s and Target’s growth.

According to Diana Smith, associate director of retail and apparel at Chicago-based Mintel Group Ltd., today’s consumers are seeking “elevated convenience,” and Walmart and Target are delivering on this — in more ways than one. For example, Walmart allows consumers to order groceries online for in-store or curbside pickup or home delivery. Smith says Walmart now offers more than 1,100 grocery delivery locations and more than 2,700 pickup locations. In addition, its NextDay delivery service now covers about 75 percent of the U.S. population, she notes. 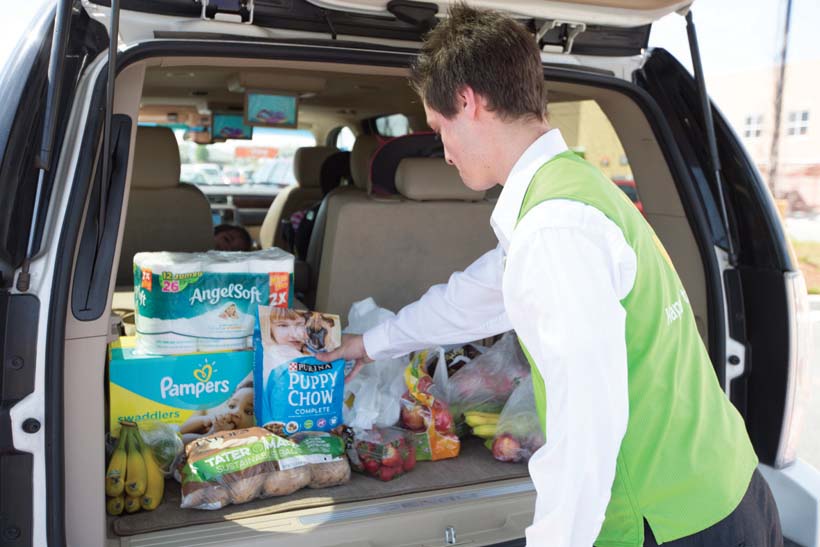 Euromonitor’s Hoyler says Walmart’s curbside pickup service has done a “tremendous job” of retaining customers in the channel. The service has been very popular, especially among time-strapped parents, and is rated highly in net promoter scores, he explains. Hoyler adds that this service gives Walmart a key competitive advantage over Amazon and other eCommerce retailers. Consumers are able to browse Walmart’s inventory and order any item that is available in a given store for pickup within a few hours. Amazon does not have the physical store network to offer such a service, he points out.

This year, Walmart has been diligently working to expand its convenient grocery endeavors. In January, the company announced that it had joined forces with delivery services Point Pickup, Skipcart, AxleHire and Roadie to expand its grocery delivery service in metropolitan areas. The company also has been piloting deliveries through autonomous vehicles in partnership with Udelv and Gatik. In September, Walmart announced plans to expand the reach of its Delivery Unlimited grocery delivery membership options to more than 1,600 stores by the end of the year. Consumers can pay either a $98 annual fee or a $12.95 monthly fee to receive unlimited Walmart Grocery Delivery orders. Consumers also can pay for each order without a membership.

Walmart also could be taking this grocery convenience a step further in the very near future. In June, the company unveiled new technology that would allow consumers to order groceries for delivery into their kitchen or garage refrigerators, enabling Walmart to cover not just the last mile but the last 15 feet of delivery space, the company says. The InHome Delivery program combines smart-entry technology and a proprietary wearable camera to give Walmart employees access to homes and consumers the ability to remotely monitor the delivery process. This fall, more than 1 million customers in Kansas City, Mo.; Pittsburgh; and Vero Beach, Fla., were eligible to participate in the program’s pilot.

Target also is making investments in eCommerce solutions. At the end of 2017, Target acquired leading online same-day delivery platform Shipt. Within a year, the service was available to millions of consumers in more than 200 markets in 46 states, a nearly 200 percent increase from Shipt’s pre-acquisition market size. Target reports that Shipt membership also tripled in that period. Although the service delivers a variety of items, grocery products have been the most popular, the company adds.

At the same time, Target also is redesigning some of its stores to offer two entrances: one for the mission-oriented shopper making a quick grocery trip and one for the more leisurely shopper who wants to stroll the aisles and, in turn, might be more prone to impulse purchases, Mintel’s Smith points out.

Also supporting the success of the mass merchandiser and hypermarket channel is its ubiquity. “Nearly all consumers do some shopping in the channel,” Mintel’s Smith says. Jon Hauptman, senior director at Inmar, Winston-Salem, N.C., points out that the channel offers a variety of benefits to attract consumers. For example, stores typically offer shoppers a variety of options for brands, package sizes and more within product categories, thus helping consumers save money and stretch their grocery budgets, he says. Mintel’s Smith adds that consumers also shop the channel for its convenience, competitive prices and high-quality private-label products.

Mass merchandisers and hypermarkets also offer a plethora of beverage options. In fact, Mintel found that food and beverage items, excluding produce, were the most popular product category for the channel, with 73 percent of surveyed consumers buying such items, according to its December 2017 report. Furthermore, Walmart reports that beverage products were the top-selling items in Nebraska, North Dakota, Minnesota, Montana, South Dakota, Alaska and Washington, D.C., in 2018, with consumers opting for lemonade, coffee, coconut milk and dark chocolate cocoa.

In hypermarkets specifically, bottled water and carbonated soft drinks were the top two beverage categories, reports Aga Jarzabek, research associate at Euromonitor. “Overall, soft drink sales, including ready-to-drink beverages, grew about 2.1 percent from 2018 to 2019, and water grew 5.5 percent,” she says. Carbonated soft drinks actually fell 0.8 percent, but they grew in share in the channel. These products are mostly purchased in multipacks, which offer higher volumes and lower values, she adds. However, impulse-purchase coolers near the register drive some single-serve beverage sales, especially in the ready-to-drink coffee, energy drink, carbonated soft drink and bottled water categories.

Within the bottled water category, sparkling water is “insanely huge,” according to Euromonitor’s Jarzabek. “It’s a real money-maker these days,” she says. Private-label brands in particular are performing well in the category. “At the end of the day … water is water to most people,” Jarzabek explains. “As long as it has a decent flavor, it can hydrate [consumers], and it doesn’t have any weird ingredients, [consumers] are going to choose private label and go for the value option.” 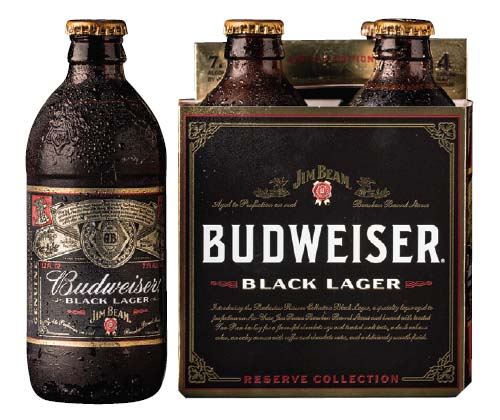 Inmar reports that beer is the channel leader for alcohol sales, followed by wine, spirits and mixers. (Image courtesy of Anheuser-Busch)

Euromonitor’s Jarzabek predicts that functional beverages also will be key to beverage sales growth in the channel. “Target is setting up coolers that highlight fancy drinks, like kombucha and ready-to-drink coffee, because that’s what consumers are looking for,” she says. Although these types of beverages do not generate large sales volumes, they do capture consumer interest and meet their needs for beverage variety, she explains.

In terms of overall channel performance, experts expect that the mass merchandiser and hypermarket channel will continue to evolve. Euromonitor’s Hoyler says the channel has reached a saturation point for brick-and-mortar stores, but continued investment in eCommerce and omnichannel options, including curbside pickup and click-and-collect models, will keep the channel relevant and help it gain advantages over eCommerce retailers. Mintel’s Smith adds that the channel should work toward private-label expansion, simplifying the shopping experience and creating new reasons for consumers to shop at mass merchandisers and hypermarkets in order to ensure future growth. BI