International Chocolate Day (Sept. 13) celebrates the birth date of chocolate pioneer Milton S. Hershey (Sept. 13, 1857), founder of The Hershey Chocolate Co., while World Chocolate Day is celebrated annually on July 7. However, consumers’ obsession with the indulgent goodness of chocolate is not limited to mere dates on the calendar, but is something to be savored year-round.

Chocolate's popularity remains intact as the ingredient is ranked No. 1 alongside vanilla at the top of consumers’ flavor popularity scale, according to Brian Wilson, applications lab manager at Boston-based PROVA Inc.

“We are seeing a surge in the exploration of nutritional beverages, non-dairy beverages and new flavor combinations,” Wilson says. “Just as the chocolate confectionary market recently added new flavor combinations and trends, the beverage industry is following. Beverage-makers use both powder and liquid chocolate in beverage development; chocolate can be the main flavor focus or a component in a multi-flavored product.

“Cocoa powder is the general ‘go-to’ when starting formulation development, but many developers find real success using liquid or powder cocoa extracts and flavors for better solubility, that chocolate flavor ‘pop,’” he continues. “It is also valuable in reducing dry matter and resolving cocoa suspension issues.”

Chocolate adds a layer of indulgence in beverages making it appealing for many formats, but it’s especially popular in better-for-you products like protein shakes, says Holly McHugh, marketing associate at Niles, Ill.-based Imbibe.

“Using chocolate and other decadent flavors creates the perception of permissible indulgence, which is very appealing to consumers who are trying to be healthier and want to treat themselves at the same time,” McHugh says. “… Chocolate is also rich in antioxidants, especially polyphenols, which helps the body fight against free radicals.”

Melissa Muldowney, strategic marketing director of taste for Beloit, Wis.-based Kerry, also points to the health benefits of chocolate, particularly dark chocolate. “Consumers associate dark chocolate with heart health, weight management and brain health,” she explains. “Within the beverage sphere, chocolate has always been a key flavor for both dairy and nutritional beverages, but over time we have seen an increase of chocolate in other categories such as beer, coffee and even emerging in refreshing beverages like water. 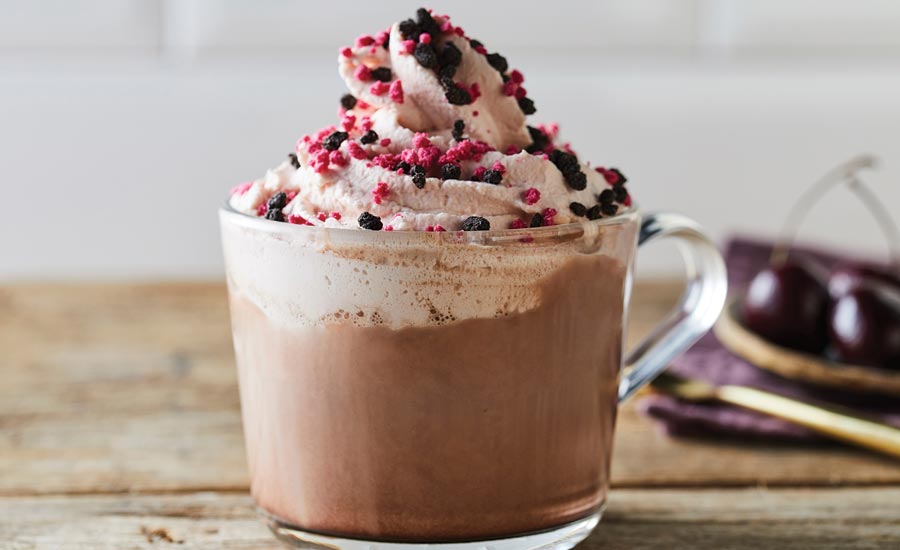 “… The world of alcohol has also taken a particular love to the enhanced flavor profile chocolate gives, from beer to spirits and even within the wine category, chocolate lends itself well to the indulgent alcoholic beverage category,” she continues. “Chocolate has been on Kerry’s Taste Charts as a key flavor for the last 10 years. We’ve been seeing an increase in chocolate flavors paired with emerging profiles such as ginger, lavender, espresso, hibiscus, orange and honey.”

Chocolate in wines remains a fan favorite. With a tag line "Pleasantly Sinful," ChocoVine, a brand of Holland Royal Dutch Distillers, is a blend of Dutch chocolate and French Cabernet Sauvignon. Other chocolate-flavored wines in the portfolio are Dark Chocolate, Chocolate & Raspberry, and Chocolate & Whipped Cream.

In addition to pairing chocolate with wine, Manuela Chevallier-Rufigny, research and development manager of taste at Kerry, notes that chocolate remains popular because it is a nostalgic, familiar flavor, for example, chocolate milk and childhood.

Chevallier-Rufigny also sees the ingredient expanding into other non-alcohol categories such as water and herbal teas. “Chocolate creates a more complex beverage rather than just warm water with herbs, and adds creamy notes with a different mouthfeel because of the fat content,” she says. “… You can also combine chocolate with creamy notes such as dairy, cream or butter, spice, fruits such as orange and cherry, and floral flavors such as lavender and violet for a more premium product.”

Chocolate also boasts a label-friendly appeal, which is paving the way for increased cocoa and chocolate usage and “endless innovations” in cold and hot coffee drinks, performance beverages and more, says Gretchen Hadden, marketing manager for cocoa and chocolate at Minneapolis-based Cargill.

Chocolate also is popular in ready-to-drink (RTD) meals and powders. For instance, Aylesbury, England-based Huel recently launched its RTD chocolate beverage in the U.S. The drink contains all 27 essential vitamins and minerals, the company says.

As the popularity in high protein sports beverages has risen, Hadden suggests a greater need for flavors that balance function with taste. “Cargill’s Wilbur Duet product made with chocolate liquor and cocoa powder gives formulators a way to deliver indulgent chocolate flavor, while also masking the less appealing flavors associated with increased levels of whey and plant proteins,” she says.

Cargill’s Hadden also notes chocolate’s versatility as an option to pair with new, more exotic flavors. “[The] consumer appetite for craft flavors continues to soar. For example, pairing cacao with chili strikes a balance for consumers between traditional and something bold and new.”

An extra layer of flavor

Formulating with chocolate could present some challenges that can be overcome by adding cocoa as an enhancer to the mix, says Aparna Oak, director of flavor innovation at Imbibe. “From a flavorist perspective, chocolate cannot be a stand-alone flavor because it has a chemical taste,” Oak says. “Cocoa is added to the matrix and chocolate acts as an enhancer of the cocoa to get the flavor consumers expect. Natural chocolate flavors — especially dark chocolate — are challenging but not impossible for a skilled flavorist to create.”

Before developing a beverage, Kerry’s Chevallier-Rufigny advises beverage formulators to pay attention to the synergy between the flavor profile and the mouthfeel in order to meet consumers’ expectations. “It’s important to adjust the texturing agent, sweetness and fat content so the beverage isn’t too watered down,” she says.

Cargill’s Thomas Jablonowski notes that the high fat content of chocolate or a chocolate liquor as a flavoring agent also can present formulation challenges such as the appearance of a fat layer on the beverage’s surface.

“This can be solved by making adjustments to the quantity used or through the addition of cocoa powder,” says Cargill’s senior technical services manager for cocoa and chocolate. “Cocoa powder typically has a lower fat content than chocolate and can help to provide flavor and color, depending on the beverage. Cargill’s Wilbur Duet, which contains a blend of cocoa powder and chocolate liquor, is often a great solution for beverage developers.” BI