As consumers’ beverage choices have shifted, the carbonated soft drinks (CSD) market has taken one of the largest hits. For example, the compound annual growth rate (CAGR) for the U.S. CSD market declined 1.6 percent from the 2012-2017 timeframe, according to data in New York-based Beverage Marketing Corporation’s (BMC) report titled “Carbonated Soft Drinks in the U.S. through 2022.” The 2001-2006 timeframe was the last time the category’s CAGR was not in decline, at which point it was flat, BMC’s report states.

Despite performance challenges, forecasts suggest a deceleration of the contraction. BMC forecasts that for the 2017-2022 time period, the CSD market’s CAGR will be down 0.4 percent. Although CSDs are expected to still be in decline, this could be a sign of market improvements.

Read the report from other years

“Demand for carbonated soft drinks remains soft but performance improved modestly in 2018 thanks in particular to improved performance in the diet segment,” says Gary Hemphill, managing director of research for BMC.

Caleb Bryant, senior beverage analyst for Chicago-based Mintel, also details some of the recent gains the CSD market has experienced.

“While we do not have recent volume consumption data, 2018 was a significant year for CSD brands; total CSD sales increased 2.2 percent,” Bryant says. “This overall growth was driven by a strong increase in Diet Coke sales stemming from the launch of new Diet Coke flavors in skinny cans. Diet Pepsi also experienced sales growth possibly due to PepsiCo bringing back the original Diet Pepsi formula with aspartame.

“Sales of most full-calorie CSDs also increased in the past year with Fanta, Dr Pepper and Canada Dry being brands with notable growth,” he continues.

According to Chicago-based Information Resources Inc. (IRI), unit sales of carbonated beverages were down 1.9 percent for the 52 weeks ending Feb. 24 in total U.S. multi-outlets including convenience stores. Despite volume sales being down, dollar sales were up 2 percent during this same timeframe totaling more than $27.9 billion.

“In 2018, regular cola carbonates, excluding caffeine-free and diet versions, continued its decline similar to previous years,” he says. “Various categories within non-cola carbonates, however, showed surprising developments. Coca-Cola has seen success with its revamped Diet Coke line which turns around new, inventive flavor formulations. We have also seen non-cola categories do well. Lemon-lime sodas in particular are doing well despite sugar concerns that are dragging down other categories.”

One macro trend that has impacted the CSD market for roughly the past two decades has been health and wellness.

“Consumer demand for healthier refreshment has negatively impacted the carbonated soft drink category,” BMC’s Hemphill says. “Thirsty consumers still like soda but increasingly they have been reaching for healthier options like bottled water.”

Mintel’s Bryant echoes similar sentiments, but notes that the CSD market still maintains a core base.

“Consumer interest in health and wellness negatively impacts the CSD market,” he says. “Consumers are reducing their CSD consumption frequency or dropping out of the market entirely due to health concerns surrounding CSDs. Sixty-one percent of non-CSD consumers say they don’t drink CSDs because CSDs are too high in sugar.

“Despite interest in health, historical CSD sales are largely flat/in slight decline rather than in a tailspin suggesting a core base of consumers who aren’t reducing their CSD consumption,” he continues. “Twenty percent of heavy CSD drinkers (i.e., consumers who drink CSDs multiple times per week or more often) say they aren’t concerned with the healthfulness of CSDs.”

In addition to concerns regarding sugar content, mistrust of artificial sweeteners has impacted the category, Euromonitor’s Esposito says. However, niche categories have weathered the storm. “Subcategories with fruit flavors and products that work well as mixers have been able to eke out growth despite these trends,” he says.

Because of this impact, experts are suggesting enhanced ways for CSD manufacturers to reach consumers. 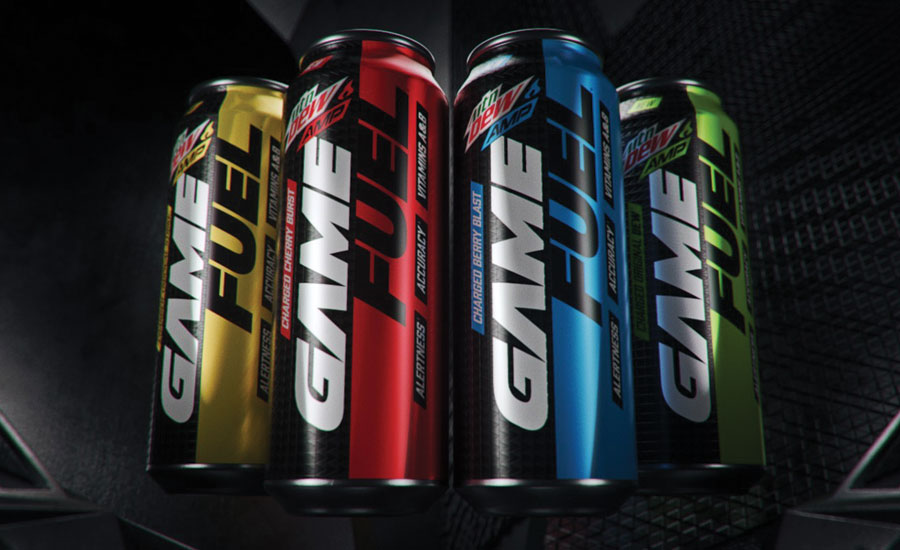 MTN Dew Amp Game Fuel features a can made just for gamers, the company says. It has a re-sealable lid and a no-slip grip texture similar to gaming hardware, which can help keep rigs safe from spills, it adds. (Image courtesy of PepsiCo Inc.)

One trend that many manufacturers in the CSD market already have embraced in order to connect with consumers is through packaging innovations, particularly smaller pack sizes.

“Mini cans are extremely important for the CSD industry as a mini can appeals to consumers who want to reduce their CSD consumption, but still enjoy CSDs,” he explains. “Mini cans are small indulgences for consumers who don’t want to give up CSDs entirely.

“CSD brands need to focus on keeping occasional/infrequent consumers in the CSD market as lapsed consumers are unlikely to begin purchasing CSDs again,” Bryant continues. “Seventy percent of non-CSD consumers say nothing would motivate them to purchase CSDs. Mini cans can keep at-risk CSD consumers engaged in the category.”

Another area in which CSD manufacturers can connect with consumers is through sweetener innovations.

“Consumers generally have strong set preferences when it comes to CSD sweeteners,” Bryant explains. “For example, many consumers have a negative perception of aspartame. However, when Diet Pepsi removed aspartame from its formula it faced a backlash from customers and experienced a strong drop in sales. In 2018, PepsiCo relaunched Diet Pepsi with aspartame and experienced a strong sales increase. CSD brands need to focus on catering to core consumers and their sweetener preferences.

Like any beverage category, CSD manufacturers are assessing the roles that flavor and function can play in the soft drink market. However, when it comes to flavor, the market dominators are here to stay, experts note.

“Colas are still king when it comes to carbonated soft drink flavors, accounting for about half of total category volume,” Hemphill says. “The biggest brands are colas so we believe cola is likely to remain the most popular flavor. That said, we see consumer demand for flavor variety within the category. So lemon-lime, heavy citrus and pepper type soft drinks also account for significant volume.”

For those looking to explore new flavors in CSDs, Mintel’s Bryant suggest they take a cue from the foodservice channel.

Perhaps a bigger hurdle, though, for soft drink manufacturers lies in its ability to tap into the functional aspect of beverage innovations. However, Euromonitor’s Esposito notes that some success has been found with this approach.

“Given the success we have seen with Bai Bubbly, functional/better-for-you formulations certainly have potential in carbonated soft drinks,” he says.

Other analysts foresee a limited upside in trying to develop a functional soft drink given the product’s reputation as a treat.

“While fortified CSD brands exist (e.g., with vitamins, probiotics, protein), these products likely have only a small consumer base,” Mintel’s Bryant says. “CSDs often satisfy the treat occasion and if a consumer wants a ‘healthy’ CSD he’ll likely choose a familiar diet brand over an unknown healthy CSD.”

“We believe the carbonated soft drink category will continue to experience sluggish sales for two primary reasons; people want variety and healthier refreshment,” BMC’s Hemphill says. “Those two trends provide headwinds for the category as it works to navigate the future.”

Although healthy refreshment will continue to loom over the CSD market, soft drinks still have an opportunity to take advantage of the non-alcohol trend in the overall beverage market.

Bryant adds that soft drinks can find a way to play in the alcohol market through premium offerings. “Furthermore, while total alcohol consumption is falling, spirit consumption is rising driven by higher-end and super-premium spirits,” he says. “A premium CSD can also be used as a mixer to complement the premium spirit. For example, Fever Tree is a fast-growing premium mixer brand; the mixers can be consumed by itself (satisfying CSD occasions or as an alcoholic beverage alternative) or used as a mixer with a spirit.” BI