Black Bottle Scotch whisky is going back to its roots with a new black bottle. As its name suggests, Black Bottle was originally presented in a black bottle sourced from Germany when it was launched by the Graham brothers in 1879. When World War I interrupted supply, Graham and Co. was forced to switch to a green bottle, the 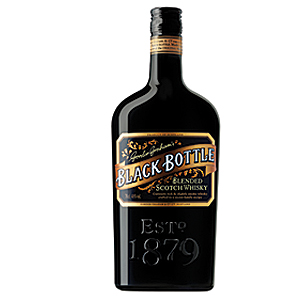 company says. Now, a century later, Black Bottle is celebrating its origins by going back to black. The new design has been inspired by an archival black bottle dating back to 1906. At the same time, the company also tweaked its blend of single-malt and grain whiskies to reflect the recipe the Graham brothers created 135 years ago. The relaunch has been positively received in the United Kingdom, Russia and the Baltic states, and the company expects to launch in France and Germany this fall and in the United States by winter.