Six-, 12- and 24-packs of beer might not be enough anymore. Austin Beerworks partnered with Helms Workshop to release a 99-pack of beer for $99.99. The multi-pack was created to help celebrate the renaming of its Peacemaker craft beer as Peacemaker Anytime Ale and support the idea that anytime is a good time for a can of the 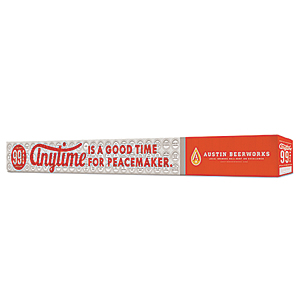 beer. “This inspired us to create the world’s first and only 99-pack,” explained Michael Graham, co-founder of Austin Beerworks, in a statement. “What started out as a joke became very real when we realized how much people love the idea of 99 beers for $99.99.” To spread the word about Peacemaker Anytime Ale’s 99-pack, Helms Workshop and Austin Beerworks also launched a full outdoor and print campaign with social media and word-of-mouth components. For example, consumers can only find out where the 99-packs are sold by tagging online posts with the hashtag #AnytimeAle and following Austin Beerworks’ Facebook, Instagram and Twitter pages or through word of mouth, the company says.