Although protein drinks previously were associated with bodybuilders and workout occasions, mainstream consumers now are seeking protein-enhanced products. In fact, 63 percent of surveyed shoppers say they look for protein content when choosing foods and beverages, and 72 percent of consumers indicate that the protein 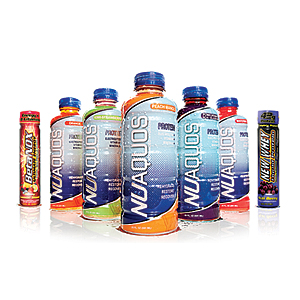 content of foods and beverages is either somewhat or very important, according to Brooklyn, N.Y.-based Virginia Dare’s 2014 Consumer Protein Survey.

“Our mission is to become the largest protein-based beverage company in the country,” explains Chief Executive Officer Charles Walkley. “Our protein offerings prior to [NuAquos] were very niche and [geared toward] serious athletes, bodybuilders and people like that. So we decided to use our proprietary protein technology and create a more mainstream product.”

The brand drew inspiration from other sports drinks, vitamin-enhanced waters and protein beverages already on the market and strove to formulate “a better isotonic” that offers vitamins, minerals, functional carbohydrates, electrolytes and protein, Walkley says.

In addition, the company incorporated its protein formulation expertise to create a beverage in which the protein content is virtually tasteless, Walkley says. “Protein is very difficult to make taste good,” he explains. “Protein is difficult … to keep stable in beverages … [but] we’ve been doing it for years, and we know it better than anyone else. But the key thing is, protein, by its very nature, does not taste good, and we’ve got proprietary technology that makes protein taste great.”

NuAquos protein drinks contain 12 grams of complete protein, all six base electrolytes and all essential amino acids, 19 vitamins and minerals, a 2-to-1 carbohydrates-to-protein ratio, a 2-to-1 potassium-to-sodium ratio, and 3 grams of fiber, according to the company.

The beverages are available in five flavors — Watermelon, Peach Mango, Pomegranate Acai-Blueberry, Orange and Kiwi-Strawberry — all of which Walkley says are equally popular within the brand’s portfolio.

Although the brand had the formulation nailed down from the time of launch, it decided to give its packaging a second look following its soft launch in mid-2013.

“From a label standpoint, our original label … was black,” Walkley describes. “And when you hold a black bottle in your hand, it looks cool, it stands out to you, and it really makes an impression. You put a black label on a shelf in a supermarket or any convenience store, [and] it gets lost [on] the shelf; it almost looks like a void on the shelf; it doesn’t stand out; it doesn’t pop at you.”

To design a label that would stand out to consumers more, the company engaged in some market research and created several designs and concepts to find a more colorful, impactful label, Walkley says.

Once the colors were perfected, the brand also worked on the logotype. “We noticed that on our first black label, the word ‘NuAquos’ did not jump out [because] it was too small, so we went from a horizontal NuAquos to a vertical NuAquos and increased the font size,” he says.

In addition, the company learned through its market research that consumers look to labels to find out what ingredients are inside the product and what benefits it offers. To provide the information consumers need, the brand featured the important ingredients prominently on the front of the package and listed the beverage’s three major benefits. “What’s predominant on our label is that [NuAquos] has protein, electrolytes, vitamins and minerals,” Walkley explains. “What does it do for you? It rehydrates, it restores, and it recovers … so that’s what the label says.”

From a functional standpoint, the brand also switched out its original 43-mm cap with a 38-mm cap. Walkley notes that the larger cap was difficult to remove, so the brand opted for a smaller size that was easier to open. The new caps also include the New Whey Nutrition shield logo for additional branding.

The new packages currently are available in larger independent grocery stores and convenience stores in the Northeast and on the West Coast as well as in Albertsons grocery stores in the Inner Mountain region. The company also announced in August a distribution deal with Edison, N.J.-based ShopRite to sell NuAquos in more than 250 stores in New Jersey, New York, Pennsylvania, Delaware and Connecticut for $2.49 for a 20-ounce bottle. It also hopes to continue to expand availability of NuAquos into mainstream retailers.

However, unlike the mainstream consumer base of NuAquos, New Whey 42 has a more specific consumer base that encompasses two different consumer groups, Walkley notes. The first group — bodybuilders and serious athletes — seems more intuitive, but the second group — bariatric patients — might be more surprising.

University of Florida’s College of Medicine notes that bariatric patients should observe a liquid diet for two weeks prior to surgery, including consuming protein shakes multiple times each day to help ensure good nutrition status prior to surgery. In addition, medical experts including nonprofit health care organization HealthPartners recommend that patients consume liquid protein supplements for up to eight weeks after bariatric surgery to help the body heal, maintain nutrition, and prevent loss of lean muscle mass.

New Whey Nutrition’s other product, BetaNox, also was originally designed for athletes, but, since its expansion into the convenience store channel, it has found favor with manual laborers who take advantage of the beverage’s benefits to reduce muscle fatigue, Walkley says. The energy supplement contains a combination of caffeine, amino acids and B vitamins to provide a quick burst of energy but also reduce muscle fatigue and increase blood flow and oxygen to muscles.

Both New Whey 42 and BetaNox supplements also are available in the sports nutrition channels.

Walkley notes that all three of New Whey Nutrition’s brands are experiencing double-digit growth year over year, and the company hopes to continue this growth in the coming years.