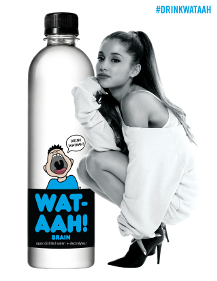 New York-based Wat-aah! announced a marketing and long-term equity partnership with pop artist Ariana Grande. In her first endorsement deal, the multiplatinum recording artist will join Wat-aah! as an equity holder and partner. Her ownership stake in the company was not disclosed.

“Living a healthy lifestyle is so important to me, and this is one of the reasons I chose to partner with Wat-aah!,” Grande said in a statement. “My fans are my everything, and, because of this, I could only endorse something I believe in. Also, I love drinking water, and I want to inspire my fans to do the same. Now as a partner in the company, I am excited to share Wat-aah! with everyone.”

Grande will be the face of Wat-aah!’s newest marketing strategy, “Own Your Future,” which highlights healthy hydration to empower kids and teens to take charge of their health and future. The multimillion-dollar advertising campaign will be handled by Wat-aah!’s agency of record, Berlin Cameron United, which is the former ad agency for The Coca-Cola Co.’s Coca-Cola, Vitaminwater and Dasani brands.

“Kids today respond to messages and people that are authentic and genuine,” said Rose Cameron, chief executive officer and founder of Wat-aah!, in a statement. “This is why we partnered with Ariana. To us, Ariana perfectly symbolizes ‘Own Your Future.’ She is entirely her own creation. Her determination, creativity, business savvy and mastery of social media has landed her at the top of her profession, inspiring millions of kids and teens worldwide.”

The Wat-aah! brand consists of a line of functional waters available in both still and sparkling varieties that are free of sugar and sweeteners. The company partially attributes its success to its mission of championing children’s health, including the annual Move Your Body initiative and its Taking Back the Streets campaign, both of which support First Lady Michelle Obama’s health agenda.

Wat-aah partners with the OMG Girlz for new campaign

Wat-aah! to sponsor ‘Songs For A Healthier America’ program

Food Plant of the Future: Surviving and Thriving with Automation