After the successful launch of its Screamin’ Pumpkin Ale on tap last year, Griffin Claw Brewing Co. decided to help the craft beer reach more consumers by launching it 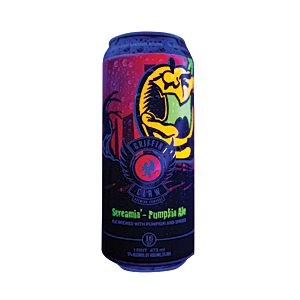 in 16-ounce cans this year. To coincide with the beer’s fall theme, the craft brewer also decided to use the new packaging opportunity to launch its glow-in-the-dark cans. “We chose to make the glow-in-the-dark cans because of the incredible artwork on our Screamin' Pumpkin can, the technology was new, and Halloween is the perfect application for a can that glows under a black light,” said Scott LePage, a spokesperson for Griffin Claw Brewing, in a statement. The craft brewer partnered with can manufacturer Rexam to order special glow-in-the-dark inks to bring the can’s pumpkin patch artwork to life. The mouth of the screaming pumpkin on the can as well as the text on the can both glow in the dark, LePage says. Glow-in-the-dark cans of Screamin’ Pumpkin Ale are available at fine craft beer retailers in Michigan while supplies last.