So that consumers don’t have to worry about which beer to purchase, Stevens Point Brewery released a new Point variety 12-pack that contains its four new India 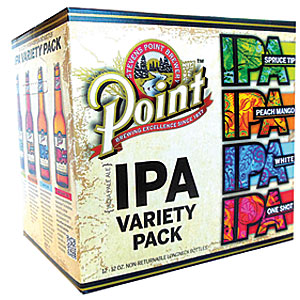 Pale Ales (IPAs): Point Spruce Tip IPA, Point Peach Mango IPA, Point White IPA and Point One Shot IPA. These limited-edition brews feature different hop varieties and malts in each batch and are available only in the IPA variety packs, which contain three 12-ounce longneck bottles of each new IPA. The variety pack  is being introduced wherever Point’s handcrafted beers are sold, the company says. “The IPA variety pack is a perfect IPA sampling opportunity, a showcase for the wide range of possibilities the IPA style offers,” said Joe Martino, Stevens Point Brewery operating partner, in a statement.