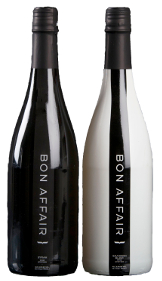 San Diego-based Bon Affair announced the official launch of its Bon Affair low-calorie wine spritzers made only with California wine, purified sparkling water, electrolytes and grape seed extract. The company closed a deal with entrepreneur Mark Cuban on the May 9 episode of ABC’s “Shark Tank,” on which Cuban invested $150,000 for a 35 percent stake in the business. Now, the brand has begun the process of taking the wines national, it says.

Available in Syrah and Sauvignon Blanc varieties, the wines already have been picked up by a collection of retailers, including Whole Foods Market, Nordstrom and Albertsons. However, for the time being, they can only be purchased online at www.bonaffair.com or at select retailers in Southern California through a distribution partnership with Global Beverage Distribution. A 750-ml bottle retails for approximately $14.99.

Containing 6.5 percent alcohol by volume and 300 calories in a bottle, Bon Affair is positioned as a lighter “everyday” wine option, the company says. Additionally, for the ingredient-savvy consumer, Bon Affair prints complete nutritional labels on all of its bottles.