Uncle Si’s Iced Teas to hit the market this spring 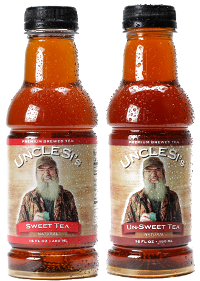 At the request of fans of A&E’s “Duck Dynasty” TV show, West Monroe, La.-based Duck Commander Family Foods and Prospect, Ky.-based Chinook USA announced the launch of new Uncle Si’s Iced Tea. Based on “Uncle” Si Robertson’s family recipe and formulated by S&D Coffee & Tea, Concord, N.C., the line will be available in Sweet, Un-Sweet, Peach and Half & Half varieties. The lineup will make its debut at the Duck Commander 500 NASCAR race the weekend of April 6 at the Texas Motor Speedway in Ft. Worth, Texas.

“Hey look, all the time when I go out, people are asking me all about my iced tea: How do you cook it? What type is it?” Robertson said in a statement. “So finally, I just decided, hey … I’ll stop all the questions, because I am gonna come out with Uncle Si’s Iced Tea. Then, I’ll let y’all be the judge. Y’all try it and tell me what you think.”

Robertson began drinking an early version of Uncle Si’s Iced Tea in the late ‘60s while he served in the U.S. Army in Vietnam. His mother sent him a set of blue Tupperware cups, boots and two jars of jalapeno peppers. To this day, Robertson cherishes those plastic cups; he is rarely seen without one of them filled with iced tea, the companies say. As “Duck Dynasty” grew in popularity and fans began posting more often about Uncle Si’s iced tea, creating it as a ready-to-drink beverage was a natural next step, they add.

Uncle Si’s Iced Tea is naturally brewed with premium hand-selected teas, cane sugar and fruit juices. It does not contain any artificial ingredients, powders or synthetics, the companies note. The four-variety lineup will initially launch at retail in 16-ounce bottles. The teas will expand into half-gallon and full-gallon sizes in late spring.